Converting an Excel Worksheet into a JSON document with C# and .NET Core and ExcelDataReader 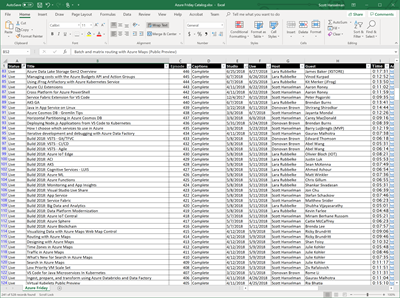 I've been working on a little idea where I'd have an app (maybe a mobile app with Xamarin or maybe a SPA, I haven't decided yet) for the easily accessing and searching across the 500+ videos from https://azure.microsoft.com/en-us/resources/videos/azure-friday/

HOWEVER. I don't have access to the database that hosts the metadata and while I'm trying to get at least read-only access to it (long story) the best I can do is a giant Excel spreadsheet dump that I was given that has all the video details.

This, of course, is sub-optimal, but regardless of how you feel about it, it's a database. Or, a data source at the very least! Additionally, since it was always going to end up as JSON in a cached in-memory database regardless, it doesn't matter much to me.

What's most important (after clean data) is that the process one builds around that authoritative source is reliable and repeatable. For example, if I want to build a little app or one page website, yes, ideally I'd have a direct connection to the SQL back end. Other alternative sources could be a JSON file sitting on a simple storage endpoint accessible with a single HTTP GET. If the Excel sheet is on OneDrive/SharePoint/DropBox/whatever, I could have a small serverless function run when the files changes (or on a daily schedule) that would convert the Excel sheet into a JSON file and drop that file onto storage. Hopefully you get the idea. The goal here is clean, reliable pragmatism. I'll deal with the larger business process issue and/or system architecture and/or permissions issue later. For now the "interface" for my app is JSON.

So I need some JSON and I have this Excel sheet.

Turns out there's a lovely open source project and NuGet package called ExcelDataReader. There's been ways to get data out of Excel for decades. Literally decades. One of my first jobs was automating Microsoft Excel with Visual Basic 3.0 with COM Automation. I even blogged about getting data out of Excel into ASP.NET 16 years ago!

Today I'll use ExcelDataReader. It's really nice and it took less than an hour to get exactly what I wanted. I haven't gone and made it super clean and generic, refactored out a bunch of helper functions, so I'm interested in your thoughts. After I get this tight and reliable I'll drop it into an Azure Function and then focus on getting the JSON directly from the source.

A few gotchas that surprised me. I got a "System.NotSupportedException: No data is available for encoding 1252." Windows-1252 or CP-1252 (code page) is an old school text encoding (it's effectively ISO 8859-1). Turns out newer .NETs like .NET Core need the System.Text.Encoding.CodePages package as well as a call to System.Text.Encoding.RegisterProvider(System.Text.CodePagesEncodingProvider.Instance); to set it up for success. Also, that extra call to reader.Read at the start to skip over the Title row had me pause a moment.

The first pass is on GitHub at https://github.com/shanselman/AzureFridayToJson and the resulting JSON looks like this:

Thoughts? There's a dozen ways to have done this. How would you do this? Dump it into a DataSet and serialize objects to JSON, make an array and do the same, automate Excel itself (please don't do this), and on and on.

Certainly this would be easier if I could get a CSV file or something from the business person, but the issue is that I'm regularly getting new drops of this same sheet with new records added. Getting the suit to Save As | CSV reliably and regularly isn't sustainable.

Sponsor: Stop wasting time trying to track down the cause of bugs. Sentry.io provides full stack error tracking that lets you monitor and fix problems in real time. If you can program it, we can make it far easier to fix any errors you encounter with it.

Comment on this post [20]
Share on Twitter or Facebook or use the Permalink
March 07, 2019 6:56
I have a similar need and I found the same nifty library. Will you be comparing the new JSON object with the existing one for all changes contained, or just appending new rows / episodes?

Can you share if you are storing the result in CosmosDB? (as it has been a recent topic on Azure Friday)

I enjoyed the post! Nice to consider new ways to do old tasks.

Abhay
March 07, 2019 12:42
I've a similar use case and use ExcelDataReader too.
But I'm using excelDataReader.AsDataSet with an ExcelDataSetConfiguration.
There is the ability to set ConfigureDataTable with UseHeaderRow = true.

Ralph
March 07, 2019 21:35
I have used PowerShell for this kind of stuff for years. There is a module called ImportExcel that will let you do something like:

It works in PowerShell core, too!

Rob Cannon
March 07, 2019 22:06
Even though the question is 'how would you do this in C#' (or not?) I would probably do it with SheetJS in javascript - it has built in XLSX.utils.sheet_to_json() helper function and workin with JSON in javascript just feels more natural.

Scott Turner
March 08, 2019 4:35
EPPlus is another fantastic excel library, you can even query your spreadsheet with linq. :) It's good for both reading and writing to your openxml-based spreadsheet. Good stuff.

Steve
March 09, 2019 3:04
There is no other way I would do any work with Excel without EPPlus library (opensource).

David
March 12, 2019 3:31
I like using the spreadsheet as an ODBC source such as MikeP commented.

This should allow you to filter by date or other attribute.

I also like accessing the document as an open office XML document.

I'm certainly not a developer, but wouldn't this PowerShell command work:

Aaron Nelson
March 12, 2019 11:48
My advice is not to use excel datareaders from microsoft. Is it OLE DB or ADO or whatever.

It will bite you always because an update in the future of these underlying technologies will mess things up and brick your app. Try something with native access.

Edward
March 14, 2019 0:41
Using this ExcelDataReader, and AsDataSet, I'm not getting values out of cells containing formulas. It's not practical in real business life.

Kevin Brack
March 19, 2019 16:38
The trick I just used was to export the data as CSV and make that an embedded resource in the DLL. A static constructor reads the data in and I'm ready to roll.

I'll have a look at the NuGet packet, maybe embedding the actual spreadsheet would be a better idea. What I have now is both the excel workbook for people to inspect and update and the CSV file for the build. If there's an update I have to "Save-As" to get the CSV data into source control / build.

JohnD
March 20, 2019 6:02
I think I've used most of the approaches here at one time or another (including that OleDb one that if I recall right can get you into trouble if it gets the wrong type for the column, e.g. if your first thousand rows are integers and then it becomes alphanumeric I seem to remember it looking ahead, choosing int for the column and then borking far down the sheet when it hits alpha numeric values). Then you add more plumbing, then it works.

I like your approach though, your code is always straightforward. If it implements IDataReader I have ToJson and ToJsonStream extension methods I'd have used (Also have ToExcel, ToCsv, ToTab, To every other format I've ever needed and pack ratted away into my utility kit). Hehe.