Last week I blogged about some new audio features in Windows 10 that make switching your inputs and outputs easier, but even better, allow you to set up specific devices for specific programs. That means I can have one mic and headphones for Audition, while another for browsing, and yet another set for Skype.

However, while doing my research and talking about this on Twitter, lots of people started recommending I check out "EarTrumpet" - it's an applet that lets you control the volume of classic and modern Windows Apps in one nice UI! Switching, volume, and more. Consider EarTrumpet a prosumer replacement for the little Volume icon down by the clock in Windows 10. You'll hide the default one and drag EarTrumpet over in its place and use it instead!

EarTrumpet is available for free in the Windows Store and works on all versions of Windows 10, even S! I have no affiliation with the team that built it and it's a free app, so you have literally nothing to lose by trying it out!

EarTrumpet is also open source and on GitHub. The team that built it is:

It was originally built as a replacement for the Volume Control in Windows back in 2015, but EarTrumpet 2.0's recent release makes it easy to use the new audio capabilities in the Windows 10's April 2018 Update.

It's easy to make a crappy Windows App. Heck, it's easy to make a crappy app. But EarTrumpet is NOT just an "applet" or an app. It's a perfect example of how a Windows 10 app - not made by Microsoft - can work and look seamlessly with the operating system. You'll think it's native - and it adds functionality that probably should be built in to Windows!

It's got light/dark theme support (no one bothers to even test this, but EarTrumpet does) and a nice acrylic blur. It looks like it's built-in/in-box. There's a sample app so you can make your apps look this sharp up on Rafael's GitHub and here's the actual BlurWindowExtensions that EarTrumpet uses. 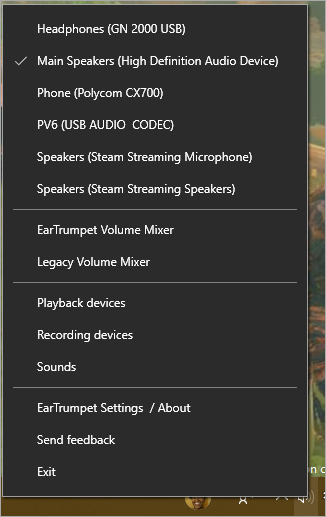 EarTrumpet 1.x works on Windows "RS3 and below" so that's 10.0.16299 and down. But 2.0 works on the latest Windows and is also written entirely in C#. Any remaining C++ code has been removed with no missing functionality.

EarTrumpet may SEEM like a simple app but there's a lot going on to be this polished AND work with any combination of audio hardware. As a podcaster and remote workers I have a LOT of audio devices but I now have one-click control over it all.

Given how fast Windows 10 has been moving with Insiders Builds and all, it seems like there's a bunch of APIs with new functionality that lacks docs. The EarTrumpet team has reverse engineered the parts the needed.

From a development/devops perspective, I am told EarTrumpet's team is able to push a beta flight through the Windows 10 Store in just over 30 minutes. No waiting for days to get beta test data. They use Bugsnag for their generous OSS license to catch crashes and telemetry. So far they're getting >3000 new users a month as the word gets out with nearly 100k users so far! Hopefully +1 as you give EarTrumpet a try yourself!

Sponsor: Check out dotMemory Unit, a free unit testing framework for fighting all kinds of memory issues in your code. Extend your unit testing with the functionality of a memory profiler.

Comment on this post [9]
Share on Twitter or Facebook or use the Permalink
June 13, 2018 6:24
I'll have to give it a whirl. I used version 1.0 until I read about the other audio utility you'd suggested (can't remember the name) and switched to that, as I liked it a little more. I'll have to give version 2.0 a try. I love the fact it's a store app and auto-updates.

Jerrie Pelser
June 13, 2018 12:37
Your description of David Amenta is not what I would call a plus for him. I certainly don't find the shell in Windows 8 and 10 particularly astonishing. (Quite the opposite...) But I know Rafael Rivera closely.

Fleet Command
June 13, 2018 22:22
The only feature I want out of a volume control app is this: can I control how much the overall volume goes up or down when I press the volume up/down buttons on my keyboard? 2% is too much for my ear buds, but too little for my speakers. 3rvx used to do this, but not anymore.

Joe Jones
June 15, 2018 7:48
Excellent items from you, man. I've consider your stuff previous to
and you are just extremely magnificent. I really like what you've obtained
right here, really like what you're saying and the way in which wherein you are saying it.
You make it enjoyable and you continue to care for to stay it sensible.
I cant wait to learn much more from you. This is actually a
great website.

Scheid
June 15, 2018 18:36
Interesting timing that The Verge put up a similar post. Maybe something to keep an eye on.