ELMAH: Error Logging Modules and Handlers for ASP.NET (and MVC too!)

Joe Lowrance said, er tweeted, it best when he said,

"the amount of attention ELMAH hasn't got is shocking."

ELMAH is one of those largely unknown and deeply awesome .NET Open Source projects that should be part of ASP.NET proper.

I like to say that ELMAH is Tivo for your ASP.NET Errors. You can get your Yellow Screens of Death, with full call-stack back and analyze what's really happening. It's Exception Driven Development. What's it really do?

Once ELMAH has been dropped into a running web application and configured appropriately, you get the following facilites without changing a single line of your code:

Created by Atif Aziz (@raboof on Twitter) and Scott Mitchell, ELMAH means is "Error Logging Modules and Handlers" and has been rocking my world since, well, September of 2004.

From the project site:

ELMAH is wonderful for many reasons. First, because it just works. Second, because it's a fantastic example of effective use of HttpModules and HttpHandlers working together. Third, because it's been design with enough thought that nearly anything you'd want from it for use in a production site is there.

I'm sitting here in a cafe and I'm going to add ELMAH to the ASP.NET MVC-based NerdDinner.com Source Code. Actually, the site, as I don't need to recompile the source if I'm not doing anything tricky. ;)

Implementing ELMAH on your ASP.NET (MVC or otherwise) Site

I download ELMAH, and I put its DLL in my /bin folder (or wherever you like to put libraries). ELMAH doesn't need to be referenced by your project directly if you don't want to. Ultimately it just needs to be in your bin folder so it can be found. You can put it in /lib and make a build event if you like, as long as it ends up in /bin.

Then I open up two instances of notepad and copy over a few HttpHandlers and HttpModules into my existing web.config. Tedious, but straightforward.

Where you put these depends on if you're using IIS6 or IIS7, but the general idea is the handlers looks like this:

You can pare it down a bit if you don't need ErrorMail, for example. Then, I hit my site at http://localhost:xxxx/elmah.axd and I get this Error log, similar to what you'd see via Trace.axd. 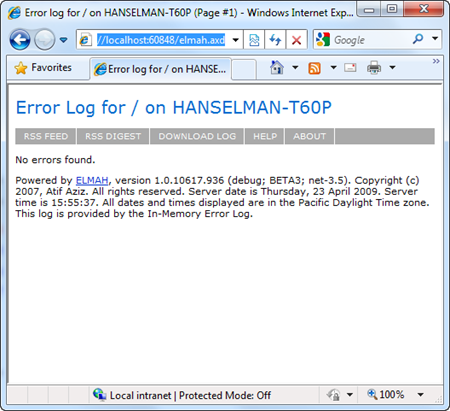 Ok, no errors. Let's make some. I'll visit some messed up URLs and intentionally cause trouble...here's what ELMAH says now: 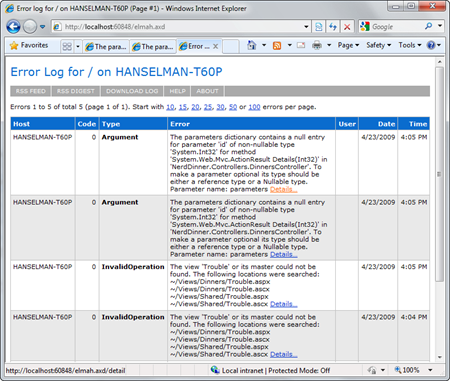 And I can drill down and see the Yellow Screen of Death (YSOD) as it "would have been." 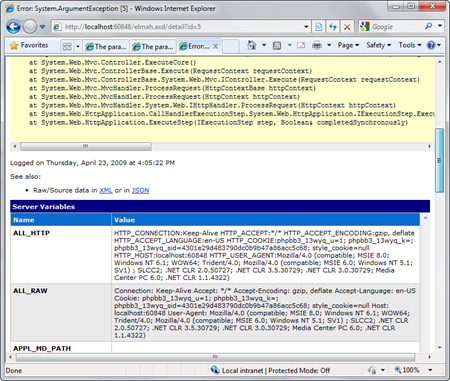 Now, this assumes my ASP.NET MVC site has no error handling to speak of. ELMAH is watching for unhandled exceptions and recording them, holding them in memory. I can also setup logs to SQL Server or VistaDB or SQLLite so they'll live beyond application recycles.

You can certainly secure access to the ELMAH pages. You can also pull the errors into your favorite RSS Reader, which is a killer feature, IMHO.

In ASP.NET MVC there's an attribute called [HandleError] that will grab anything that goes wrong inside your controllers and show the ~\Shared\Error.aspx View. However, because it "handles" the error, it hides it from ELMAH. Remember that [HandleError] is a declarative try/catch. In my case, I want to have ELMAH handle it.

There's two ways around this.

One, I made a method in my Controller like this:

In my web.config, I have a customErrors section like this:

This sends folks to /Dinners/Trouble which shows the Error page, after ELMAH takes care of it.

Second, as an advanced technique, I could write my own derived HandleErrorWithELMAHAttribute that logs the error using ELMAH's API, then passes the exception up to the default handler with ASP.NET MVC.

Looks like Dan Swatik's blog is dead. :( UPDATE: Looks like Dan Swatik was coincidentally doing a similar thing error this morning! What's nice about the solution on Dan's Blog, is that it was written with the help of Atif Aziz himself! (Remember, Atif's The primary author of ELMAH!) Here's the StackOverflow question.

My naive solution is below, but Atif's is better as it signals the error to ELMAH's pipeline rather that logging directly as mine does. Here's the more correct version:

Below is my naive version.

Then I put the attribute on my ASP.NET MVC Controller like this:

Either way works, I actually kind of prefer the first one, although it requires a controller to have an essentially empty method to send folks to the shared error page. I keep the /Confused and /Trouble methods in there as I think it makes the site more personal.

Anyway, ELMAH rocks and you should use it today. Phil Haack loves ELMAH too! Jeff and the guys at StackOverflow use ELMAH also, albeit a "custom fork." (Release your code, Jeff!)

Time for me to to donate some money to the ELMAH Open Source efforts.

Michal Rogozinski
April 24, 2009 3:39
ELMAH is a great addtion to any ASP.NET site. I forked a custom version of ELMAH when working on E.P.A. sites a few years ago. We then retro-fitted many existing ASP.NET sites with the new implementation. I still demo ELMAH when teaching error handling.

Walt Ritscher
April 24, 2009 6:39
I started using ELMAH about an year ago. It's a great error logging tool. Although, we've moved away to the Microsoft Enterprise Library Exception Handling Component. I totally agree it should be part of ASP.net.

Saurabh Chowdhury
April 24, 2009 7:55
I love ELMAH. We use it in some of our applications at work. I remember using it first in early 2005. At that time there were some bugs with the SQL Server implementation that we had to fix to use it (but that is the power of open source). You are right, it's sad that not enough of it is used.

Andrew Rimmer
April 24, 2009 18:56
I've been using ELMAH for a few years and I don't know what I should have done without it. I've also extended it to log all session variables. Great stuff!

Jeff Sodeman
April 24, 2009 19:29
ELMAH is great, I've been using it on ASPAlliance.com since Scott and Atif's original MSDN article (forever ago). It's interesting you wrote about it just now, as I've seen it discussed in a few different places this past week, which triggered some renewed interest in getting an ASP.NET control panel built. I talked to you (and the team / SimonCal et al) at the MVP summit, too. I think it would be great if we had a central place to go in ASP.NET to view exceptions, trace output, cache data, etc. A lot of others agree (check out my post on it here: http://stevesmithblog.com/blog/asp-net-control-panel/ ), so I hope we see this at some future date. Alternately, perhaps Atif would be interested in working on a project like this one. I'd be happy to help integrate the ASPAlliance CacheManager plugin (based on ELMAH's architecture already) into the resulting control panel plugin.

Steve Smith
April 24, 2009 23:12
Do you think Microsoft would consider putting this into .NET 4.0 if it's not too late? It's always good to stress exception handling (especially uncaught exceptions). That just seems like an afterthought for a lot of programmers:) Thanks for bringing it up.

Ted Kolovos
April 25, 2009 4:37
Scott, a small correction: I had no part in creating ELMAH or its codebase. That was Atif, 100%. My only contributions to the project have been coauthoring the article on MSDN you referenced and using ELMAH in all my projects and singing its praises to anyone who will listen. :-)

Joe Reynolds
April 28, 2009 16:52
I've been using a modified version ELMAH for a couple years now and absolutely love it. We run alot of applications and preferred a single console where all monitored applications could be viewed/reported on rather than each having it's own instance at the site URL. It couldn't be any easier to get this up and running and has provided a proactive means of finding bugs and issues. as if... :)

rodnex
April 30, 2009 2:37
There isn't a production web app I launch without it. I just haven't found a better way to catch and log unknown exceptions happening on the site. It's so easy to set up too.

Brettski
May 05, 2009 2:31
Nice article. I will have to review this framework, but two questions that come to mind are: 1. Is this duplicate functionality of Log4Net and other logging frameworks? 2. How well does it perform? Compared to other frameworks?

Paolo
May 05, 2009 9:10
Hi, This caught my eye from an online article. It seems I have to use the beta version as I'm using .NET 2008. Are you folks all using beta code? Just a bit suspicious of using beta code in applications I intend to deploy. Andy

Andy Dray
May 06, 2009 7:57
And why does he not use the very powerful log4net component as the core log engine? Why build the wheel once again? It does not sound very open source-minded.;)

Martin Oddman
May 06, 2009 8:41
Martin and Paolo - ELMAH isn't simply logging, it's system-wide exception handling. It's instrumentation of not just exceptions but also HTTP Context. It compliments log4net, it doesn't replace it.

Scott Hanselman
May 06, 2009 18:41
If you do not want to have open-source downloads, another good option is the build off of the asp.net health monitoring. A lot of options such as frequency for logging, intervals etc. can be configured in the machine web.config. And you can configure to use different data providers/Email as well.

https://www.google.com/accounts/o8/id?id=AItOawl6ngU7W3-hP4vslpf8cn7kx2uL0Nh6Ajo
May 07, 2009 6:47
Hi Scott, Thanks for the info. We will try to use this feature in our ASP.Net app's. Is there anything for the Windows application ? Thanks, Thani

Gal Ratner
May 15, 2009 19:18
Curious about why you like this more than the built-in health monitoring. According to this thread - http://markmail.org/message/xjlljkrtsnwyijha#query:health%20monitoring%20elmah+page:1+mid:xjlljkrtsnwyijha+state:results - there may not be a lot to gain from ELMAH in the current rev of ASP.NET? What do you think? I've tinkered with both, but not for a long time, so I'm trying to decide which path to take with a new project.

Ryan Williams
May 25, 2009 18:54
ELMAH works great, but I can't help being a bit annoyed by the fact that every extension is implemented as a HttpModule - as a way to piggyback on the instantiation procedures - when the things they do have little or nothing to do with the Http context. Then again, it works, so why bash it? :)

gunteman
May 31, 2009 1:02
I can't believe there is not a tutorial on how to get this to work with sql server for logging. I went here: http://code.google.com/p/elmah/ and downloaded it and there is no information on how to get sql server to be used for the logging.

https://www.google.com/accounts/o8/id?id=AItOawnPmR_oNvOP3tJBHXxaEjkG0T7uQED4Sxs
June 17, 2009 16:33
In response to the quote at the very top of the page, "the amount of attention ELMAH hasn't got is shocking." Perhaps I can shed some light. ELMAH suffers from horrible organization. The project itself, which lives on a Google page, looks like it was organized by a group of children, led by a 10 year old. There is no clear authoritative documentation, just a bunch of blogs scattered about. While ELMAH may be good for casual use, there are much better products on the market (SmartInspect is probably the best) for use professionally. So to me, what is really shocking, is that a bunch of intelligent grown men are able to create a supposedly great tool called ELMAH, but they can't do something simple like organize it and write a user manual. That's shocking!