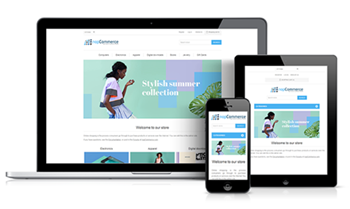 I've been exploring nopCommerce. It's an open source e-commerce shopping cart. I spoke at their conference in New York a few years ago and they were considering moving to open source and cross-platform .NET Core from the Windows-only .NET Framework, so I figured it was time for me to check in on their progress.

I headed over to https://github.com/nopSolutions/nopCommerce and cloned the repo. I have .NET Core 2.2 installed that I grabbed here. You can check out their official site and their live demo store.

It was a simple git clone and a "dotnet build" and it build and ran quite immediately. It's always nice to have a site "just work" after a clone (it's kind of a low bar, but no matter what the language it's always a joy when it works.)

I have SQL Express installed but I could just as easily use SQL Server for Linux running under Docker. I used the standard SQL Server Express connection string: "Server=localhost\SQLEXPRESS;Database=master;Trusted_Connection=True;" and was off and running. 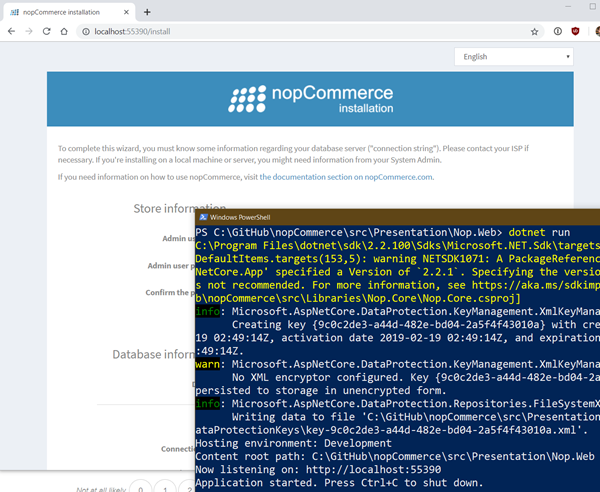 It's got a very complete /admin page with lots of Commerce-specific reports, the ability to edit the catalog, have sales, manage customers, deal with product reviews, set promotions, and more. It's like WordPress for Stores. Everything you'd need to put up a store in a few hours. 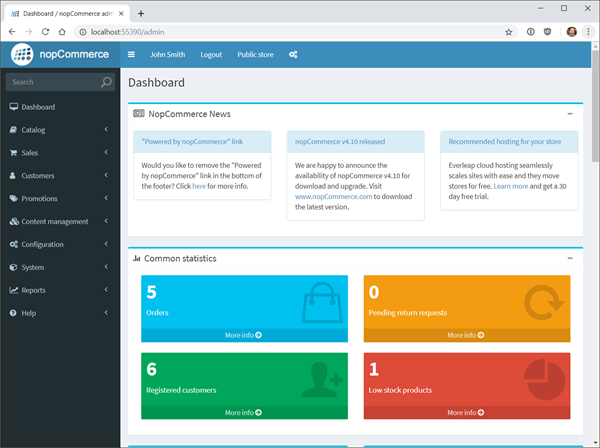 nopCommerce has a very rich plugin marketplace. Basically anything you'd need is there but you could always write your own in .NET Core. For example, if I want to add Paypal as a payment option, there's 30 plugins to choose from!

NOTE: If you have any theming issues (css not showing up) with just using "dotnet build," you can try "msbuild" or opening the SLN in Visual Studio Community 2017 or newer. You may be seeing folders for plugins and themes not being copied over with dotnet build. Or you can "dotnet publish" and run from the publish folder.

Now, to be clear, I just literally cloned the HEAD of the actively developed version and had no problems, but you might want to use the most stable version from 2018 depending on your needs. Either way, nopCommerce is a clean code base that's working great on .NET Core. The community is VERY active, and there's a company behind the open source version that can do the work for you, customize, service, and support.

Sponsor: The next generation of Jira has arrived, with new roadmaps, more flexible boards, overhauled configuration, and dozens of new integrations. Whatever new awaits you, begin it here. In a new Jira.

For those interested, I gave a presentation titled "nopCommerce - .NET Developer Overview - From Zero to 60" at various .NET meetups across the country. It is also called "Understanding the real value of Open Source by example".

John Baluka
February 20, 2019 15:45
We are working with it also, but have an issue running on Linux because of the file path in it (at least we found this issue). Note that the current master branch is not fully supported on Linux and the new version will come up this year.

Thanks, Scott for spreading the word about it.

David
February 20, 2019 19:54
I've been using it for years. Love their product. It offers a huge head start on an ecom solution for my clients. Well thought out and organized code, great UX experience, etc. Has literally saved months of dev burn down and avoided the 'blank page' startup times.

Tulin Babaoglan
February 21, 2019 15:25
Working years with the platform and never been disappointed. The team is upgrading our store to the latest (.NET Core) version here also. Love the product.

Pascal Piekar
February 22, 2019 19:10
@David I noticed this as well and it looks like both are using some of the same stuff for ui and charts (chart.js and bootstrap).

Mehmet temel
February 25, 2019 11:48
I've been using Nop too in the last three years. I mostly love the plugins architecture, that allows you to implement basically anything without touching a single line of the original codebase.
There is also a pretty active community around it, that is always a good thing.

It's not perfect, there are some thing I would have done differently, but it's a really good product from which to start if you have to implement an e-commerce website.