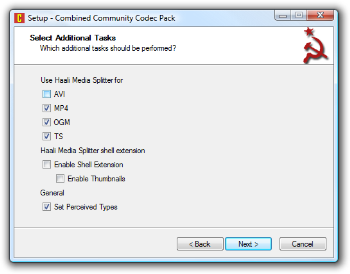 Some time last months all the Thumbnails in Explorer disappeared for me. It might have coincided with me installing VLC Player on Vista. Either way, it sucked because I had family photos with thumbnails next to videos taken with the same camera with no thumbnails. It's no fun to lose functionality.

While poking around in the Registry trying to fix this issue, I noticed that Thumbnails for AVI files worked, while no others did. The only difference with that extension was this registry key:

So, I made a registry file with this entry for each extension I wanted thumbnails for. Merged it into the registry and, lo and behold, I have thumbnails again. The file is below.

As an aside, while I was trying to fix this, I also picked up a codec pack called the CCCP (Combined Community Codec Pack) and noticed while running through its settings that it had an option to "fix perceived types." I wish I'd known this last week when I fixed THAT problem with missing Media Center Thumbnails.

Switching over to the CCCP also had the added benefit of letting me watch my MP4 encoded PSP (Playstation Portable) files in Windows Media Player, and added Thumbnails in Explorer for MP4s as well via their settings dialog. Once I got MP4 working I exported those settings and appended to them to this file.

Also, by the way, did you know that the new location of the Explorer Thumbnail Cache is down here?

No warranty or support, express or implied. YMMV. Backup your Registry before you do this and please don't come to me if your world is destroyed. You have been warned.

Comment on this post [9]
Share on Twitter or Facebook or use the Permalink
April 19, 2007 14:29
Thanks! In fact I am really surprised that the standard Tools>Options>File Types>Select All>Apply doesn't help here. Usually it works great for me. That fix is double as great if it fixes the problem when even WMP can't re-register it's components. Found yet another link to registry files that are supposed to be able to fix issues with another file types.

You turn off that thumbnail at least for videos. I was quite happy since making that thumbnail crashed explorer if I was doing it over network and since I store all that kind of files on second computer it was quite anoying.

Einar Guðsteinsson
April 19, 2007 21:16
Thanks Einar and Scott! Looks I haven't understood what you are talking about for the fist time. You were talking about media type preview. Thanks! I've never known about this trick with the the library before. By the way, this post on Aumha forums says you need re-register the shimgvw.dll library too. As far as I have understood the last dll is the one who implements the work with Windows Metafile and corresponds to the Windows Picture and Fax Viewer correct? So should it be re-registered too or re-registering the shmedia.dll is absolutely enough with resolving the problems with thumbnail display for all video files?
Now I also know what causes Windows Media Player to hang when I open the corrupted or incomplete video file from my camera in Explorer. This article notes this similar issue.

I've been using 'Vista Codec Package' for awhile and was unable to re-encode files within movie maker (MM would halt due to one of the codecs clashing with DEP) -- after reading your post got rid of VCP for CCCP and things are working like a charm!

Sean
April 30, 2007 21:58
I went through this hell a short while ago, literally spending days trying to find out the problem. I found some relevant registry keys, but nothing to fix it. I even tried exporting my laptop's working set of registry keys (all of them under file types) and importing them on my desktop, but no go.

In the end, I gave up and decided to reinstall Vista at home. Mind you, there were other problems with the machine, so the reinstall was kinda necessary to begin with, but what was really irritating is how:

1) Vista's new file type association sucks. Why does the "default program" manager say that WMP is registered for all these file types, yet when I open them in Explorer, VLC or etc. pops up? Same goes for Vista's newly redesigned file association manager. Even after changing the application there, it still won't open the correct application.

2) Vista's new file type association breaks most XP-based applications that would set their own file associations. Such as Irfanview, VLC, Winamp, etc. -- you can't rely on them to get back their own associations. Probably because of #1, and changes made to rights, the registry, etc.

3) Why is there no "self-healing" with regards to the built-in file types of Windows Vista? Can you think of a situation where you'd want your video/picture thumbnails to completely go away? Should just be part of the OS. Who cares what program you use to open them.. just show the thumbnail anyhow.

Nicholas
May 05, 2007 17:45
Hi,
I tried to run your fix (downloaded the file, renaming it and giving it a .reg extension, then right-clicked and selected Merge), but I get an error from Windows saying:

I thought this might have had something to do with the UAC (I ran into problems before trying to modify my registry with UAC turned on, despite my admininstrator rights), so I turned UAC off, but still receive the same error.

Can you tell me what the problem might be, and how to resolve it? Thanks in advance.

Kev
May 31, 2007 9:56
About a month ago I installed nero entertainment package and is sucked so I got rid of it, and it destroy thumbnails for all videos in thumbnail view i use k-lite as my video player and I run on xp
any help is greatly aprieciated as i have had no luck so far finding a fix

Dean
June 08, 2007 16:38
thaaaaaaaaaaaaaaaaaaanks , i was searching for a solution from a month , tanks again