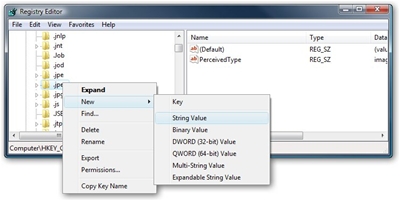 I was having a heck of a time. I had a freshly installed Vista system and I pointed the Pictures folder to my giant cache of family photos. The photos showed up fine in Windows Media Player and in Windows Photo Gallery, but when I opened up Windows Media Center, either locally or on the Xbox360 I could only see the folders but the images didn't appear!

Turns out the JPEG extensions got an important and Media Center-specific registry setting squashed, probably by some Paint program I installed.

If you go into the Registry via RegEdit and go into the .JPEG (and .JPG, and .JPG) keys under HKEY_CLASSES_ROOT and make a new String Value called "PerceivedType" and make it equal to "image" then things will magically work again!

Seems to me that Media Center was smart enough to install those keys initially, and should be smart enough to notice when they are gone. Smart defaults and all, you know?

If you're not THAT technical, download this Registry Fix File I've assembled and double-click on it. Right click on that link and save it with a .REG extension, or make sure you rename it before double clicking.

You can also set your MP4 files to PerceivedType="video" as well as PNGs, etc, if you like.