It's been over 5  years since my post how to contribute a patch to an Open Source Project. That post is focused primarily on Subversion as the source control system. If you are using CodePlex and Subversion for example, those instructions work great. Here's the same idea for GitHub projects.

Folks email me all the time asking questions like "how can I be a better programmer?" "how do I get more experience?" or even the very specific "how can I make my resume more attractive?" My answer is almost always get involved in open source.

Work with an open source project. Fix a bug, do their website, write some documentation. You don't necessarily even have to write code. A lot of open source projects need help and that help can mean doing forums work, support calls, whatever. The thing that folks forget about open source is that it's most volunteers who are doing it for the love of it. They show up.

NOTE: This example uses Git and GitHub. It is not meant to be comprehensive nor ideal. It is workable and works, but if you are considering working in Open Source or with Git for multiple projects and features you will want to explore more complete (and complex) workflows. There's an excellent "Git Workflow for Agile Teams" article, as well as a suggested Git Workflow from the NuGet team, and a fantastic screencast from Ryan Bates on contributing with Git as well as a fine screencasted introduction from Bobby Johnson.

It can be an overwhelming thing, though, to jump into a large open source project that is already established. It can also be hard to decide which small project to start, because no one wants to waste their time. How do you choose?

Some lovely gents (Andrew Tobin, Brendan Forster and Paul Jenkins) over at Code 52 have started a great idea. A new coding project every week.

What a great idea! Nothing too hard that it can't be jumpstarted in a week. This totally lowers the barrier to entry and also encourages that things stay fresh. It also creates a bunch of great codebases for us (the community) to fork and spin off into larger projects that live longer than a week.

The guys says they figured a week because:

Contributing a patch to a small Open Source project on GitHub

The Code52 projects are hosted on GitHub. I host some of my own projects on BitBucket and others on CodePlex. It doesn't really matter where a project is as long as it makes you happy.

Let's say I want to contribute a fix to the DownmarkerWPF project they worked on a few weeks back. There's a few things I can do.

Filing a bug is literally the least you can do to help a project. Even better if it isn't a ragebug (where you just tell them how they suck) but includes everything you know about the issue, perhaps a stacktrace or a screenshot. Bonus points if you're kind in tone.

Be helpful and suggest an interesting or innovative feature for their product. Bonus points if you include mockups, suggest a design or even better, start implementing it!

Fork the Code, change it, then do a "pull request"

With some SCC (Source Control Systems) you'll change the code locally package it up as a "patch/diff" file and send that file onto the project team for integration at a later time. You'll want to just use the website for spelling changes and easy stuff.

With some newer systems like Mercurial and Git you'll push your code to a central place and send a "pull request" that says "hey, the code is over here, pull it in, m'kay?"

GitHub will allow you to make changes in the browser, but that's not realistic for actual code changes. Let's get the DownmarkerWPF code, change it, and submit a pull request.

It's a lovely Markdown Editor for Windows. If you don't want the source and just want a decent zipped up version you can run, you can download it. 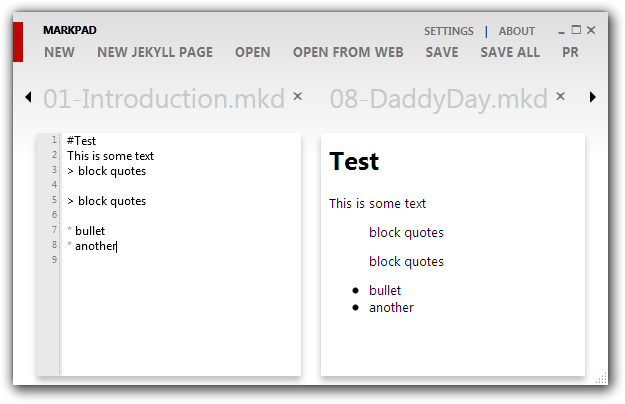 Since I am going to fix what I think is an "issue" I'll first make an issue on the site and claim it. It's issue 82, so I will remember that number.

I'll fork the code from the website and then clone my copy to my local machine. Note the URL I'm using is my fork of the code.

I could make a branch for myself to describe what I'm doing but I'm not going to because it's unnecessarily confusing for this example.

So, I love the idea of a Markdown editor for Windows as I'm writing a book with my wife using Markdown. However, my wife and I (and Leanpub.com) are using *.mkd as our extension, while the Code52 project uses *.md, *.markdown, and *.mdown. Here's an small but impactful change that I can make.

I'll find the code, and change it. Don't get overwhelmed now by the awesomeness and impact of this fix.

Now I'll compile and test the change. It works! 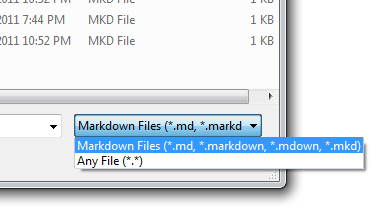 Now I'll commit my change locally, then push it to the server. Add, Commit, Push.

Cool, so now I can see on the website that my issue #82 has been associated with my change because I used the number in the commit message.

Now I'll let the Project Administrators know where they can get it by pressing Pull Request on the website.

Now I wait some number of minutes, hours or days for the owner of the project to accept my request. It's totally up to them what they accept and what acceptance criteria they have.

Here's my fix, now accepted, merged and closed by the Project Administrator. They will then close the issue. 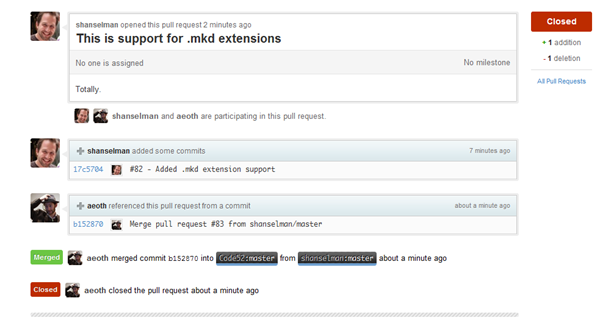 Open Source isn't as scary as it seems. Go out there now and offer your help, time and assistance to your favorite project. Promote them, use them, fix their spelling and bugs. You can play with the Code 52 guys in their chat room on Jabbr or learn all about the project at the Code 52 website.

He shows how to install Git on Windows and set up public/private keys. Then how to set up a local repo and publish to GitHub. Finally how to fork and contribute to an existing GitHub project.

Scott Hanselman
January 25, 2012 10:48
One thing that makes good sense when forking and doing pull requests on a regular basis, is to add an upstream branch that points to the upstream/master.

This requires the non-default upstream remote to be added:

Then, when you want to do a pull request you do a cherry-pick from the branch where you work is committed:

And on the website you have to switch to the upstream master.

This ensures that you only do a pull request for the commit that contains your patch.

The hardest part is: "How can I help them?"

Sometimes we can think a long time on how we can help an open source team.

I think we just need to get involved.

Most of the projects on Github are a nice lecture and they include tests, actually they try to encourage people to test their submitted code, witch is a great think.

Jean Helou
January 25, 2012 15:33
Great article. And this code52 team seems pretty cool. I'm into game development, so I have looked at their "Samurai" project, which I now "watch" on github.

Btw, that patch you pushed in this article - so mad programming skills - my eyes exploded.

Mads Laumann
January 25, 2012 19:18
It might be worth doing a followup post on best practices... encouraging pull requests from master to master, or adding code without adding tests, is a bit of a faux pas on GitHub.

Domenic
January 25, 2012 23:27
Nice article but I would recommend including the 'branch' part. I sent a pull request for a quick bug fix following the same workflow you describe to SquishIt, a great project by Justin Etheredge. Then I committed another change for an unrelated feature and it ended up getting automatically added to the first pull request [1]. Now the pull request is a mess and I don't know enough about Git/Github to fix it. :-(

I am not sure but I think using branches would have prevented this issue.

PS. If anybody knows how to split these two out into separate pull requests please let me know!

Adrian Lanning
January 25, 2012 23:35
Ya, honestly, I went back and forth on the branching thing. I actually including it, then talked to a few guys and removed it. It's hard. Honestly, Git and GitHub and their associated workflow have some significant subtleties that are non-trivial to the uninitiated. Showing the ideal workflow could be scary enough to scare someone off completely. Perhaps I can make an addendum to this post.

Scott Hanselman
January 25, 2012 23:50
I found it easiest to learn/understand Git branches by using Git Extensions. Being able to actually see the graph, and manipulate it using context menus etc., was very helpful.

For a followup/addendum, one link you might like is A Git Workflow for Agile Teams, which is where I first saw the feature branching concept. It goes into rebasing too though, which is a bit advanced.

Domenic
January 26, 2012 3:08
Ryan Bates did a great Railscast episode about this for his 300th a short while ago too: http://railscasts.com/episodes/300-contributing-to-open-source

Joost Schuur
January 28, 2012 7:51
This is great, gave me the push I needed to get over cold feet. I submitted my first patch this week!

I'm confused about one thing...after submitting a pull request, and having the maintainer approve and merge it with the master branch, my forked repository (on the GitHub website) does not reflect the latest changes.

On my local machine, master is up to date, but how do I update master in the forked repo on github.com?

Whitney O'Banner
January 29, 2012 2:11
Superb post Scott, like others have said, this has given me the push that I have needed.

I would also like to take this opportunity to say a big thanks for the time and effort that I know you put into your podcasts. The latest one, "Phoney" featuring Jon Skeet is the latest in a long line of superb episodes.

carpenteri.myopenid.com
January 30, 2012 22:05
Inspiring post. I KNOW I should contribute to open source but never do. I think part of this is that I'm afraid how other leet developers are going to view my code (still a bit self-conscious about that).

I'm confused about one thing...after submitting a pull request, and having the maintainer approve and merge it with the master branch, my forked repository (on the GitHub website) does not reflect the latest changes.

On my local machine, master is up to date, but how do I update master in the forked repo on github.com?

You've probably figured this out by now, but I just figured it out and thought I'd post it for you or anyone else: http://help.github.com/fork-a-repo

Once you add the upstream (git remote add upstream) pointing to the original repo, then just do

Pandincus
January 26, 2013 7:07
Anybody knows what happened with this Code52 project?? All the activity seems to get stopped around March last year, no new projects seems them.. :S

Asier
May 23, 2013 19:33
Awesome post. It helped me create my first issue and pull request. Looking forward to more contribution to open source projects :)