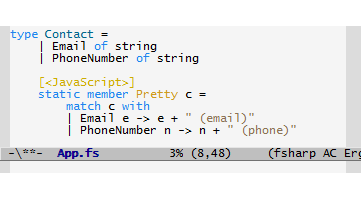 Last month after I wrote a small prototype to get the F# Suave.io web framework running on Azure Web Apps (a git deployed managed Platform as a Service) I started looking for more F# Azure resources.

Here's a list of some other existing F# programming technologies that are great with Azure. Did I miss any? I surely did. There's a huge list up at FSharp.org for resources running F# on any cloud.

You know how when you Google Translate a sentence it doesn't quite work? I mean, it works, but it doesn't feel right. It doesn't feel right because the translator understands the words, and some phrases, but not the idioms - the underlying thoughts that are unique to that language. There was a time a few years back when folks were constantly looking for C# to VB convertors. This is something that's quite possible, almost line for line. However, changing an imperative language into a functional one is not like turning American English into British English. ;) Let functional languages be functional.

F# people like to do things their way and the language has very different goals and ideas than C# so it makes sense there would be a opinionated web framework for F#. I like it.

(Although I'm sure there will be a way to use ASP.NET 5 and MVC with F# in the future, this post isn't about that.)

WebSharper has a VS Extension so you can File New new projects, and here's a hello world ToDo List app (minus the HTML view, which you can see here)

More interesting is the recent blog post by Adam Granicz where he expands on my "Suave to Azure via GitHub" prototype and shows how to deploy a real F# WebSharper app to Azure Websites via GitHub.

One of the main improvements is that my solution used FAKE and I found myself wanting a binary version of the FSharp compiler as  NuGet. An issue was open and closed within days, simplifying the deployment. Additionally their WebSharper solution creates an ASP.NET app that runs in the context of ASP.NET and IIS, while my Suave solution needed a separate process. WebSharper 3.1 was recently released, and you can see their sample running live in Azure here: http://websharper-clientserver.azurewebsites.net

And of course, you can deploy it to Azure right from here using the Deploy to Azure button!

Do you dabble in F#, are you doing F# professionally? What do you think about F#-based web applications?

Sponsor: Big thanks to Atalasoft for sponsoring the blog and feed this week! If your company works with documents, definitely check out Atalasoft's developer tools for web & mobile viewing, capture, and transformation. They've got free trials and a remarkable support team, too.

I've written hobby project using web api and F#, it hasn't been idiomatic F# but an overall pleasent experience once I got the project running.

Personally I see web applications as functions, or basically most of the applications we write but take web as the example here. You have an application, you give it some input and expect HTML/json/xml back. That basically describes a function and that how most applications works, you give input and then drag it through some pipeline until it reach the other end and then you present that result for the user.

I look forward for "native" support of F# in ASP.NET 5 so we can leverage the greater web community for building middleware that works for both F# and C# based web applications. (I know this is not a post about that topic :))

my singing monsters
June 08, 2015 14:12
I have been using the Service stack framework to build more traditional apis, with a html/js frontend. Thats how I build apps most of the time anyway, foregoing much of the asp.net mvc model.

Erlend Wiig
August 06, 2015 18:18
Another great news for today after i heard that this service is going to provide discounts for students of first course.