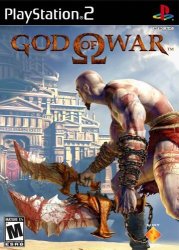 I don't play a lot of video games, and I rarely "finish" one. In the last few years I've only finished both Halos and the Splinter Cell series. Usually I get a few hours into a game, I think "OK, I get it" then I'm playing against the developer of the game and not the game itself.

Although I'd love to finish Prince of Persia and others, their levels and play-style just don't propel me forward with enthusiasm.

A while back I read an article on the best games of 2005 in Play Magazine. Each reviewer/editor put God of War in their top 5 games, as well as the #1 Action Game on any platform. I didn't have a PS2, and have not been impressed (at all) with the graphics of the console. I've been an Xbox guy since day 1. I was into the Dreamcast, then there was a lull until the Xbox.

Anyway, I asked around and Greg Hughes was kind enough to give me an older-style unused PS2. I picked up a copy of God of War for $19.95, got a few adapters and such from Radio Shack and hooked up the PS2 to my Dell 2001FP 16:9 monitor.

Of course, it's only 480p resolution, but once I got past the 'blurriness' of the graphics and into the game...this game is flippin' EPIC.

Not since Halo has a game literally pushed me forward, from level to level, amazing me at every turn. The fighting action is much like ballet with spins and turns and jumps, but there's also a juggling/combo element where you can hit enemies as many as 100+ times, often keeping them in the air for a half-minute or longer. There's also a very clever finishing move mini-game for each large monster that integrates pre-choreographed moves where you keep up by following onscreen prompts while the protagonist does crazy moves beyond the scope of the control scheme.

There's a battle about 3/4 of the way in with a 50-foot tall armored Minotaur that took me at least 20 tries to finish, but each try was as fresh as the first. The dramatic size differences between you and the bosses really give a sense of scale. You'll spend a time fighting another 6-foot-tall bad guy and you're both a reasonable size on the screen, then his papa shows up and the whole thing zooms out. There's been a number of "whoa" moments where even though the screen resolution is slow, it's clear there's some real bad-ass technologists behind this game.

It's not just walking and hacking and slashing either. This game has everything. Swimming, puzzles, some amazing climbing levels. There's a very long middle sequence where you have to find a Titan roaming in the desert with a castle strapped to his back, then you'll spend several hours inside the castle. I'd forgotten I was in a building on a beast's back until I had to head out a window and climb some more...the camera shifts and you can see the beast toes thousands of feet below, still wondering the desert.

The level loading is virtually non-existent which gives a very seamless feel to the whole world. Just as Oblivion sucked me in with its fantasy world, so did God of War. If you can borrow or rent a PS2, this is reason enough to give that aging console a try.

My only beef with God of War is its complete lack of support for Deaf Gamers and subtitles. I always turn the subtitles on in a game so I don't miss anything. The only game I've ever seen really support the hearing-impaired well was Half-Life 2 that not only included subtitles, but also on-screen prompts of audible cues.

This omission is particularly glaring during the Siren's in the Desert level where you have to use the multi-channel audio of the Siren's song to guide you through endless sands. For a hearing person this is a small thing, but the lack of support puts the full enjoyment of God of War out of the reach of the deaf gamer.

(Disclaimer: God of War is rated M, totally not appropriate for kids or anyone sensitive to violence or nudity)

Comment on this post [15]
Share on Twitter or Facebook or use the Permalink
June 04, 2006 4:20
I too normally turn subtitles on so I don't miss any dialogue. Seeing a game without the option slightly ticks me off too and ye disabled gamers do get a very raw deal. Doesn't need to be like that, but it is. The default output of the PS2 is 640x440i so not sure if the game is even 480P or not. God of War 2 should be out sometime February next year for the PS2 so you might want to hold onto it.

I also concur with the use of subtitles not only so I don't miss anything, but also because I often play while my daughter or wife are sleeping so I have to keep the sound turned down.

I mean, I empathize with the blind, but the fact that they can't play God of War doesn't really register for me. I'm not going to randomly demand a braille version.

Jeff Atwood
June 04, 2006 12:11
What's that Jeff? Could you speak up? I study/studied ASL and we are teaching Z ASL. I have a great deal of respect for Deaf culture, and I think that subtitles (virtually required for all TV shows and DVDs) are a small thing to expect in a multi-million dollar Sony-produced video game.

I'm not worried about the blind playing God of War, but they can play Doom: http://www.gmagames.com/sod.html - check it out.

You might give it a try. Empathizing is important, but install a screen reader (I use JAWS) and turn off your monitor and compute for a few days. It's an eye-opening experience. I did it while researching Section 508 compliance for a large east-coast bank.

Scott Hanselman
June 04, 2006 12:34
Jeff: I think, more than anything, it's because captions and other sound-limited options for video games are a no-brainer. They're *video* games, not audio games, and by that nature, audio should be more of a secondary function. There are lots of reasons why games should have captions, not just for deaf gamers.

I can think of plenty scenarios where it's not practical or possible for audio to be heard, yet some games assume that you have the ability to hear the audio (cut scenes, voiceover instructions, etc.). In Scott's example, it may just be that he wants to keep the noise down so his wife and baby can sleep. Should he have to guess what the characters are saying when it should be such a simple thing to provide captioning?

Personally, I always turn the captions off. I try to go for the more "cinematic" experience. But I do see the benefit to having them.

Tod: Dang, had to get my hopes up. As Scott pointed out, Gears of War is a different game, different genre. Supposedly it's going to be a must-have for Xbox 360. Since I don't have a PS2 (yet) my fingers are crossed in hopes of a PSP version of God of War.

Scott: What's on your PSP these days? Anything (I mean, besides the usual movies and pix of Z)? While I was in Hillsboro I took advantage of OR's sales tax (none) and picked up Field Commander. It's a really great little turn-based strategy, once you get past the awful voice-acting and storyline.

tod hilton
June 05, 2006 0:10
Scott, you need to stop this. You have cost me countless hours of my life due to your review of Oblivion. Usually your software recommendations take me an hour or so to download, setup and learn, but they pay off in increased productivity. Then you get started on game reviews and my productivity goes to zero. It is like you cast a Damage Productivity spell on me and I am fresh out of Restore Productivity potions.

Will you also demand a version of God of War that supports alternative input for people who don't have the use of their hands?

Where does it end?

Will you also demand a version of God of War that supports alternative input for people who don't have the use of their hands?

Where does it end?

You need a ring of damage productivity resistance. I know a halfling with a ring, but I don't know if it's got the enchantment you need... :)

Cam
June 05, 2006 18:17
I haven't played GoW, but if you haven't played Ninja Gaiden Black for the original XBox I highly recommend it. Reading through your review I saw a lot of similarities to NGB. The game play rarely gets repetitive and the difficulty level is very refreshing. I haven't died so many times in a game since the Mega Man series on NES. I'd be curious to see a side by side review if you get a chance to play NGB.

Bill Pierce
June 05, 2006 19:17
I noticed the sound thing, too. I played on a TV with not-great sound and the desert level was a huge pain. (Though the stupid jumping puzzles in the Hades level were actually more troublesome than that. I hate jumping puzzles.) I turn on subtitles on all of my games, too.

God of War 2 has been announced for February 2007. That's going to rock. http://www.gamespot.com/ps2/action/godofwar2/index.html

Travis Illig
August 03, 2006 20:33
I'm not that impressed. PoP Sands of Time is better, as is Baldur's Gate Dark Alliance. The view is not something the player can choose; I mean the " camera" angle. I miss this a LOT. How much rolling do you have to do in this game? Yet it takes up one of the 2 joy sitcks.
The acrobatics are not nearly as tough as PoP, the save points and "goodies" in the chests are located poorly, and "life" can't be stored beyond a certain limit; you have no "carrying capacity" nor can you look and see what you're carrying. You can upgrade attacks but who can remember the complicated combinations to use them???? Why must it be so hard to use your improved weapons? Keep the same buttons and give me better damage points. End of story.
I like the story and the mythology references are educational. Otherwise it's just another slash & bash game, with over-the-top gore. Most of the foes are killed too easily & the others are too hard with carpal tunnel not far off. Who in the heck can hit the buttons that fast, or follow a 7-step sequence of joy stick maneuvers (to kill the armored minotaur)? Idiotic.