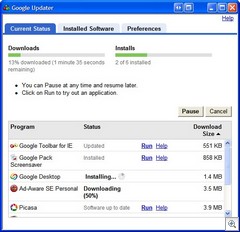 Via Greg, Google's released the Google Pack, a nice collection of fairly established software along with their own updater. I think this would be great for my mom, although RealPlayer is Satan.

It's easy to see where this is going, of course, as Google will likely start charging for the prime real estate on their own Add/Remove Programs page. Still, I dig it, and I hope it starts serving up a bunch of Open Source software. This may turn out to be a standard thing I will install on my relatives machines.

Krishna
January 07, 2006 12:45
Krishna, I tried to do that, but some how ended up with EVERYTHING installing immediately. Not sure how that happened.

Scott Hanselman
January 07, 2006 15:21
Scott, I was wondering what the two extra icons are for on title bar of your window in the screenshot? Are they from some other tool you have installed?

Eric
January 07, 2006 22:50
Eric, those are from Ultramon from Realtimesoft.com. They are for moving windows between monitors.

Scott Hanselman
January 08, 2006 3:09
I use Spybot and Adaware. It works great that way. I wish they would have included OpenOffice in the pack. I was definitely surprised to see RealPlayer in the pack.

Megan
January 08, 2006 11:51
I happened to use Google Pack yesterday and it was great to find Google Pack Screensaver. My wife likes it too because it shows the pics we take and pops them up all over the monitors. That's right, it's multi monitor aware. I got two monitors, and it pops it up quite nicely between both monitors.

vbNullString
January 10, 2006 12:12
I'd like to use the Gizmo Project instead of Skype. Have you tryed it? It looks promising.
http://www.gizmoproject.com/