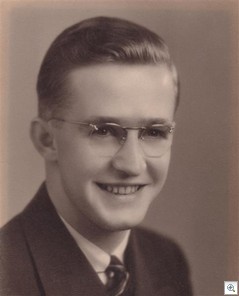 Forty-three years ago today my grandfather, John Joseph Hanselman died after a long struggle with MS. He was bedridden and in the hospital for 11 years, nearly silent until a final day of nearly complete lucidity before slipping away.

My grandmother, now 90 and a joy, saw my grandfather in the 7th grade and announced to her best friend that she would marry that man right there, and she did. They had three kids, Michael, David (my father), and Susan who died after a struggle with MS as well. 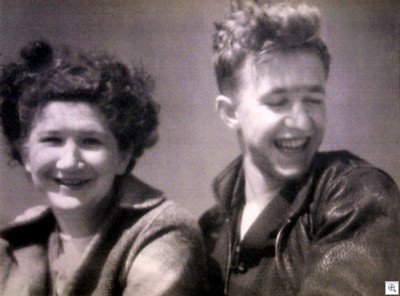 I often look at his face and think, what a kind man this fellow seems. I am proud to - as some have said - share my grandfather's face, if only in a small way.

My dad is now a Grandpa himself and although my parents live quite a few cities away, he's up playing with Z a couple of times a week at least.

He can't begin to imagine how much that means to me, for Z to have a Grandpa when I didn't. He can't begin to understand what at fine job he and Mom did raising my brother and I. Every few years, usually around the Holidays he says something like "You're both great boys, you're not on drugs, and you're doing what you love."

Some of my earliest memories of my dad were of him telling my brother and I that if Ditch Digging was our passion then we should dig the best damn ditches we could. He told me to open doors for women and treat them with respect.

When I wanted money, he encouraged me at 14 to get a job, and I did, folding shirts at Nordstrom. When I asked for a car at 16, he said "good luck with that!" but when I did buy my $300 Datsun he helped me fix it up. He always had that way of pushing without shoving, enabling without being a crutch.

I was a fantastic nerd in school (Scott? No, really? You don't say? Please, go on...) but when my Dad showed up for Show-And-Tell with the entire Fire Engine and dressed up my 4th grade class in all things Fire-Bureau, for a day I was the coolest kid in school. Dad does stuff like that. He's always thinking of others; what he can do for others.

Sometimes I'll see a shadow or a glimpse of my Dad in a window as I pass, and when I turn to greet him, it's me. Sometimes when I'll ask a sick child "You feelin' a little punky, kiddo?" and I hear my Dad's voice in mine.

When I stop by a local Fire Station to visit my younger brother, a fire-fighter like my dad was for 30 years, the old timers at the station squint and me and announce, "You're Hanselman's kid, right" before I open my mouth and I smile and ask "Is it that obvious?" (Of course, then next query is always "Are you the Computer One?" and my smile quickly fades, but that's another post. ;) )

My Dad didn't know his Dad, didn't have a father for nearly long enough. He was robbed of a Father and it makes me heartsick. But he persevered, raised in the 60's by a single mother when it wasn't fashionable - and it certainly wasn't easy.

I am so happy to have these experiences of my Dad and I forget how blessed I am every day that he's in my life, and now in my son's life as uKhulu kaZ*.

Thanks Dad for being a Grandfather to my son, a Father to Josh and I, and more and more, my Friend.

*The Grandpa of Z

Comment on this post [15]
Share on Twitter or Facebook or use the Permalink
September 07, 2006 10:01
I must agree with you - Dave sure is a keeper! Whether he's playing with Z ("Hey guy, it's Grandpa!") or trying to feed him ("Nummer, nummer!") we are lucky to have him in our lives. After giving it some thought I've decided I won't trade him in for a younger, newer model: we love this vintage Dave just the way he is!

I have been following your blog, dev-endeavors, and musings for over a year now. I always enjoy your insights to all things geek (I mean that in the best of ways), but this was truly warming to my heart.

May your Z know, love, enjoy, and model you and your father. For that (at least to me) is what eternal life is all about.

Robbie Coleman
September 07, 2006 11:21
Scott, your post really goes to my heart! Most of the time we keep on working and often forget the really important things in life, sometimes until its too late. My father died a few months ago at age 66. My two boys will grow up without ever getting to know him and my life will never be same as well. I am very thankful for the time I have with my family and like you say: I truly feel blessed for this gift.

Marc Hoeppner
September 07, 2006 11:32
Thanks for sharing this personal stuff as well, it's a nice break from all the computer stuff ;).

Sometimes I'll see a shadow or a glimpse of my Dad in a window as I pass, and when I turn to greet him, it's me. Sometimes when I'll ask a sick child "You feelin' a little punky, kiddo?" and I hear my Dad's voice in mine.


That's scary isnt it ? The first time I noticed this was a particular cough my dad has in the morning. One day I realised I do the exact same thing o.O.

Eric Schoneveld
September 07, 2006 16:45
Scott, I loved the pictures and the story. Grandma sounds great. My wife suffers from MS as well - not the progressive kind luckily. Appreciate the post.

Thomas Wagner
September 07, 2006 17:28
Thanks for a post that makes us all feel a little more thankful for the people in our lives. I lost my dad one month ago to Pick's Disease - similar to Alzheimer's, but more aggressive. He was 55. None of his 3 granchildren, all born since he was diagnosed in 2000, never really got to know their grandfather. I couldn't have asked for a better example of a husband and father to follow than my dad. Thanks again for a touching post.

Rob Bazinet
September 07, 2006 20:02
Scott, thank you for reminding us that there is an important life outside of computers. This was a truly heart warming story.

I was informed of your blog at our local .NET users group the other night. And what a suprise! What a great post, as my mother was diagnosed with MS 20 years ago I can relate in a way. Although she is bedridden, fortunatly she is still with us. Keep up the good work and *great* posts.

I really enjoy your family style, I know Z is loved and I thought that this article would be a nice read: http://www.watchtower.org/library/g/1999/10/8a/article_01.htm

(Met you in Plano, TX, I was the xsd guy...I still haven't bought code-smith, or code rush)

Phillip
September 08, 2006 9:15
That's a great tribute to your dad and a wonderful expression of family. Thanks for allowing us to be part of your gift to your dad, grandmother, and your son.

just kidding - great post and quite a testament to your father. He must be proud.

>>Some of my earliest memories of my dad were of him telling my brother and I that if Ditch Digging was our passion then we should dig the best damn ditches we could.

Ha, two of mine are:
- money doesn't grow on trees
- I'm taking 10% tax from your allowence

Vic Berggren
September 14, 2006 18:28
Very nice post, Scott. Your sincerity is part of the reason why I enjoy reading your stuff, both technical and non-techie.