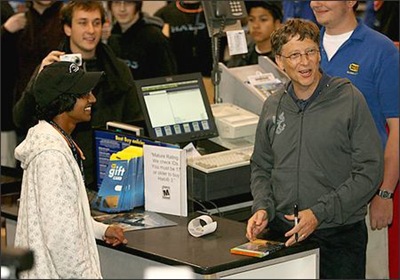 That's pretty cool, Bill Gates sold the first copy of Halo 3 to a 17-year-old in Bellevue at the Best Buy. Why did I think of that - standing in line for 10 hours to meet Bill. Darn. I'll need to be more creative.

Fortunately, as you know, I went to work for Microsoft for one reason. Was it to "influence millions of developers?" Please. It was to get a cheap copy of Halo 3. Home delivered. Yesterday. To my home. Thank you Company Store. I can quit now.

Seriously, the wife was kind enough to let me encourage me to play "that damn game" last night from about 10pm to 3am. I don't play a lot of games, so this was a rare thing. I started on the Solo Campaign - I never start with Multiplayer, I want to get my bearings first - I did that for about four hours. I then did the Multiplayer Matches for the last two.

It looks like Halo. Maybe I've forgotten what Halo 1 and Halo 2 look like, but Halo 3 looks like those, except bigger and sharper. The graphics aren't face-meltingly awesome like BioShock or Gears of War. I didn't go "holy crap, look at that water" or utter any "wow's" that I can think of.

However, it's smooth. It's calm. The framerate is clearly the number one priority of their graphics engine. You can feel it as you walk around. There's no tearing, no drops, no slowdown. It's just buttery smooth. I'm not saying that they've sacrificed visual quality for framerate, I'm not qualified nor do I have an eye for such things. I am saying that you WILL notice the smoothness. I did like the Spartan (no pun intended) opening menu. No nonsense. Gets you right into the game.

The story picks up literally minutes after Halo 2 ends. This of course means that you should familiarize yourself with the story if you want the cutscenes to make sense. I had to read Wikipedia on Halo 2 before I went "oh! THAT was who that dude was." Then again, I have a memory like a sieve. Frankly, now that there are THREE I want to go play Halo 1 and 2 through on Single Player again for some reason more than I want to play #3.

So far the same has been very easy on Normal mode, so I think I'm going to pump up the difficulty as soon as I can. I would probably think that "Heroic" difficult would be a good default for folks who made it through the first two games.

The dual wielding (two guns) option, combined with the addition of a pile of new weapons makes the mind work much more than with Halos 1 and 2. You're constantly asking in the back of your mind, "is this the right combo for what might be coming." Also, you'll need to watch the reaction of the enemies, as they are distinct. I never thought I'd choose a Shotgun to go after a Brute, but frankly, not only is anything better than the standard gun, the Shotgun just works. It becomes clear which weapons work against which guys and each weapon has it's reason for being.

The story really has you on rails. After playing BioShock, another FPS that is slightly less structured (but still on rails), I had forgotten how I didn't like games that walk you from level to level. Don't get me wrong, the level design is lovely, but there seems to be a pattern just in the first few hours of walk, walk, walk, fight, fight, go back to the main area urgently!, run run run, fight fight, new door opens up, walk walk walk. We'll see if there are surprises coming that will blow my mind like the the introduction of The Flood did.

My ONLY complaint (and it's a lame one) is that the dude is just so jumpy. After playing Gears of War and being stuck to the ground with no jumping at all, the Master Chief in Halo 3 seems like he's running on the Moon an can leap really high and really slow. It's a little confusing for me, but I'm getting used to it. Pretty lame that's my worst complaint. ;) It's a really solid game.

Oh, one other thing you can do Single Player is you can play cooperatively single player online. If anyone sees me online in Xbox Live I'm "glucose" and I'm happy to play if the family is asleep. If you haven't played a single-player game as a team with someone in another timezone, do, it's a treat.

So balanced. I just hate getting beat on in Multi-player games. Seriously. It's depressing. I suck and I know it, so I want to be paired with others who suck equally. How hard is that? Well, apparently it's so hard that it takes three versions - but they nailed it. You really do get matched to folks that are challenging, but not punishingly so.

There's a ridiculous number of options and choices in multi-player and if Bungie continues to offer maps (which I'm sure they will) then it will continue to stay fresh. They've even included an object placement/map editor called the Forge. You can't change terrain, but you can move stuff around and buy and place weapons.

Last night when I was playing there were about 90,000 people online. Right now there are:

It looks like there are at least a half-million folks for us to play with. :)

Is it the greatest game ever? Probably not, but I'm only 4 hours into the single player mission. It might turn out that way. It's clearly different from Bioshock (which may well be the greatest game ever) and Gears of War, but if you like the FPS (First Person Shooter) genre, then all three are distinct flavors worth tasting.

It's really fun to play, though, no question. As I see it:

Should you buy Halo 3? If it make you happy, yes. It is a very pretty, very balanced game. I expect I'll have a lot of fun with it.

Comment on this post [18]
Share on Twitter or Facebook or use the Permalink
September 25, 2007 19:55
Counter-Strike:Source kicks Halo 3's ass. The graphics are so unbelievably detailed, my friend puked all over his keyboard. His brain literally thought his body was moving, causing the nausea. BOOM HEADSHOT!!

Josh Stodola
September 25, 2007 20:15
Actually the nausea is due to source engine games tending to use FOVs in the 70-75 range. It's not the detail causing the nausea, it's the movement not "sitting right" with the brain.

I still prefer the PC experience with FPS gaming, lately the TF2 beta. I never did get the hang of using relative positioning (joystick) vs absolute (mouse). But maybe thats because I haven't spent hours playing on consoles. :)

I have vicariously seen a fair bit of Halo and Halo 2. They did seem to care about the story reasonably and to keep the game focused. I hope Halo 3 lives up to peoples expectations.

That's said, I AM psyched to play this game. I'm stoked about Bioshock, too, but just haven't had a chance to play it yet.

Coleman
September 25, 2007 21:13
Ya know, a store in the UK leaked Halo 3 over the weekend so a LOT of people have been playing it for a while already!

Scott Hanselman
September 26, 2007 2:01
I was a little dissapointed with the game as well, I was expecting more.

Al Pascual
September 26, 2007 12:43
The only way I'm going to get to play Halo 3 is at a friends or relative that has an XBox360 and Halo 3. I've been able to the original and 2 on the XBox (back when game systems were affordable) but now the price of PS3 and 360 have made it an either/or deal and not both. I had to chose a platform and it was the PS3.

I hope it eventually comes out on windows, and not with the long waits Bungie and Microsoft are good at.

Joe Chin
September 26, 2007 20:27
I started playing Bioshock and I love it. But, two days later I picked up Metroid Prime 3 Corruption for the Wii and my 360 has been collecting dust since. Getting back to Bioshock is definitely on my to-do list once I'm done with Metroid (about 90% completed), plus we have a baby due in late October, so Halo 3 is just going to have to wait...

Scott Hanselman
September 26, 2007 23:00
It is as good as they say. It's very intuitive, and I think other game developers can learn a thing or two from it. The Wii remote is so different from anything else that came before it, I guess it takes games like Metroid or Zelda to show what can be done with it.
One thing I've always like about the Metroid series is the way it encourages the player to explore. With new abilities, the player is able to go to places that were previously out of reach, and you're rewarded with more powerups (Energy tanks, Missles, etc). I never finished Gears of War or any of the Splinter Cell games because it seemed so station-to-station, and I could never see the light at the end of the tunnel.

Vlad
September 27, 2007 14:15
If you're looking for an open-ended FPS and don't mind playing it on your PC, I can't recommend STALKER enough. It's ferociously large, creepy and gorgeous. There's jillions of quests and things to go and see and packs of dogs to get eaten by.
It's got some awkward mechanics to it (AI can have some telescopic x-ray vision, weight limit, gun accuracy) but that can be modded out with a few downloads.

Dave Solomon
September 27, 2007 18:32
Halo 3 singleplayer is competent, but what makes Halo good isn't the story. A game like Bioshock is clearly much more sophisticated in terms of narrative, art design, thoughtful themes, etc. But in terms of raw gameplay options its hard to beat the value you get in Halo. I'm most excited about the Forge. A level editor that you can 'play'? I haven't seen that before on consoles. The videos make it seem like it captures the fun of Gary's mod (a level editing half life mod).

Jon
September 28, 2007 21:02
Dude...
I just found out that you left Cori... I too am playing Halo 3 and loving it. (Actually, Just finished it) It is nice end to the series. It almost makes me sad to see an end of the era. But, I am sure that Bungie (MSFT) will have even bigger and better things to come. Love to hear from you sometime, just drop me a quick note. How is family? Good I hope.
Laters
Steve

I just got my copy of Halo 3 and tried to add you as a friend on xbox live but your friends list is full.

Now that your an MS insider maybe you can get them to up the limit for you :)