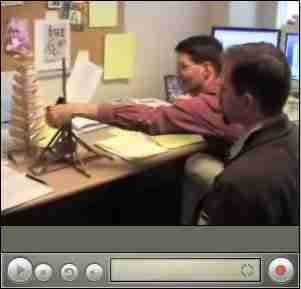 It's Video #2 in the Hanselminutes on 9 series.

Rory and I did a few videos together a while back to promote TechEd 2005. (Baby Carrots, Designing Software) They kind of worked, but were perhaps a bit forced. We thought they'd be cool at the time because when Rory and I hang out and just riff, we're a hoot. A hoot and a half, even. So, the Rawdawg got the idea for he and I to wander around Microsoft's Building 42 (Developer Division or "DevDiv") and simply pop in to folks offices and ask them "What are you working on?"

For me, I wanted to get back into the "Roots of Channel 9" - raw discussions, preferably with folks who know what they are talking about.

Here's video #2 in our travels through Building 42 on the Microsoft Campus. We didn't plan anything, nor did we warn folks we were coming.

In this short video, we interviewed Vance Morrison, an Architect on the .NET Runtime Team, specializing in performance issues with the runtime or managed code in general.

We actually stopped and bothered Vance because he had a trebuchet on his desk that we saw through the window. We had to stop.

Vance does some pretty amazing stuff around Managed Code Optimization. Take a look at the micro-optimizations around typeof() calls over at his blog. Vance is a busy guy so this video is only six minutes long.

The first video in this series is still over here: Hanselminutes on 9 - #1.