How to attach MP3 sound effects to PowerPoint animation elements 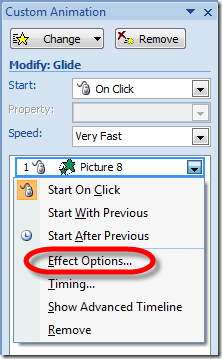 I'm working on a presentation for the DE (Developer Evangelists) the day before Mix. Since so many MSFT folks are getting together in one place, we usually take advantage and do some side meetings, etc.

I'm doing this cool slide (at least I think so) and I added a small animation as picture comes in from off screen.

I wanted to add an MP3 to that effect so that it'd play as the animation happened. I wandered around the UI for a white, trying to figure this out.

It's a little counter-intuitive, but each Effect Element can have its own sound attached, so you have to Right Click on the Element in the Custom Animation Pane, as seen at right. 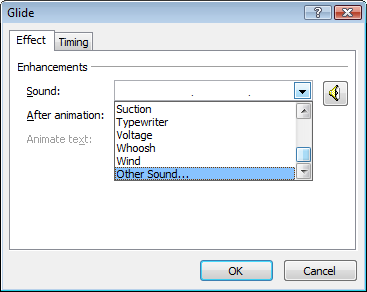 When you select Other Sound... you'll get a File Dialog prompting you for a WAV file. Here's where I got stuck for a moment. It ONLY allows WAV files and I wanted to play an MP3. Well, I could have converted the MP3 to a WAV, but not only would it have made the file a lot bigger, but I would have had to go looking for a converter.

It turns out that the WAV format can support MP3-compressed audio as long as the WAV header (wrapper) is correct. So, rather than "uncompressing" my MP3 into a fat WAV (using RAW PCM Audio), I can just run this little command line app "MP3 Decoder" and it will create a .WAV file with the MP3 inside.

Run the little app by Niklas Beisert and you're on your way. The file will be roughly the same size (still small!). Attach the "now WAV" to your animation and you've just successfully attached an MP3 to an animation in PowerPoint.

Scott Hanselman
March 03, 2008 5:20
I believe there is actually a licensing fee to use mp3 files, so I can see why mp3 might not be supported, but WM* is a Microsoft created format on a microsoft product; would seem like a no brainer to me.

Just kidding! Every one of us has to do a presentation at some point. It's good to know the little "quirks" of Powerpoint. Thanks!

Thiago Silva
March 04, 2008 2:22
Apparently it's creating a WAV Header and putting the MP3 inside it. It's more than just a file rename (I tried that and it didn't work).