I love dashboards. I love Raspberry Pis (tiny $35 computers the size of a set of playing cards). And I'm cheap frugal. I found a 24" old LCD at Goodwill (a local thrift shop) and bought it but it's been sitting unused in my garage.

Then I stumbled on DakBoard. The idea is simple - A wifi connected wall display for your photos, calendar, news, weather and to-do.

The implementation is simple genius. It's a browser that starts up full screen (kiosk mode) and just sits there and updates occasionally. DakBoard provides the private webpage and tools to make that happen. You can certainly build this yourself with any number of open source tools. I chose DakBoard because it was simple, beautiful, and I was able to get the whole thing done in less than an hour. I'm sure I'll spend many hours tweaking it through. There's also the very popular MagicMIrror platform, so lots of choice and power in this space!

What are some considerations?

Someone asked me - "What would I want to put on my dashboard other than a calendar? I don't see why this is useful."

What would you put on a Glance-eable Display? 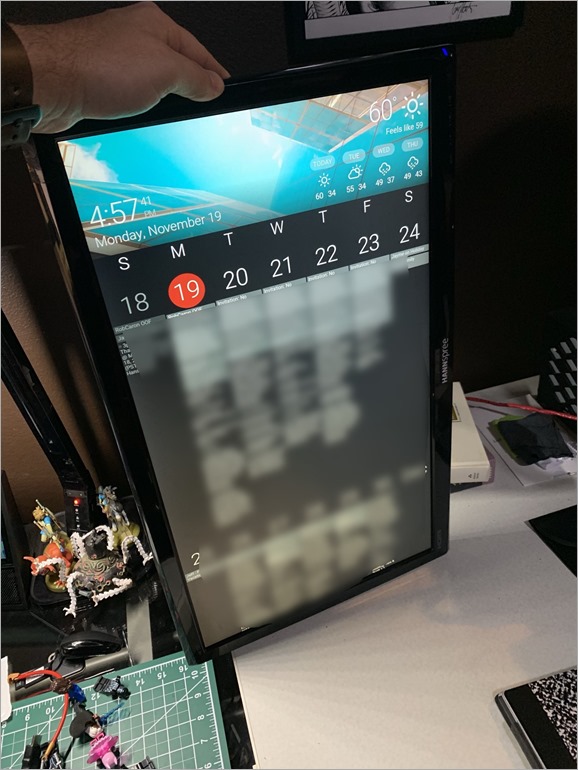 You'll want to ask yourself, is this just an iPad on the wall? I'd propose not. In fact, I'd say this is a Wall Mounted Glanceable Display - a personal dashboard - not an interactive thing. I want the family and kids to just stop by, note important information and move on.

It's also worth pointing out the a horizontal monitor on the wall looks like, well, a monitor on the wall. But somehow when it's Portrait it's dramatic. It's not something we are (yet) used to seeing. I may try this out in a few ways, or even make a few of these displays!

How to Build a Raspberry Pi-based Family Calendar

It's pretty easy! I used the DakBoard Blog but I had most of the stuff already.

Install Raspbian on the Raspberry Pi. I use Noobs to bootstrap my install as it's super fast and easy. Go through the standard setup. Make sure you've set up:

Then you make sure that Chromium starts up full screen, the mouse is hidden, and we're looking at the dashboard! It's super important you don't have to touch it. It's an appliance, right?

Then you can set up a cronjob if you want to turn the Pi's screen on and off on a schedule. Using rpi-hdmi.sh you can make a crontab -e that looks like this:

My family uses Google Calendar (GSuite) to manage hanselman.com, but I use Outlook at work. I also have a lot of business/work crap in my calendar that the family doesn't need to see. So I have two problems here, filtering, and appointment movement between Work and Home.

My wife and kids use Google Calendar and it's their authoritative source. My work calendar is MY authoritative source, so I want to sync Outlook->Google but ONLY including Personal/Podcasts/Travel categories. I categorize in Outlook at work, and then those appointments that are appropriate for the family calendar get moved over. Then the Family Calendar dashboard includes color coordinated items for Mom, Dad, Kid1, Kid2. The kids include homework that's due as appointments.

I use the Outlook Google Calendar Sync open source project to do this calendar movement for me. It does require Outlook and is a client solution so if you have a better idea let me know.

GOTCHA: I have been using Google Calendar for YEARS. I have also been using sync tools like this for years. As such, I was noticing that sometimes DakBoard would timeout asking for my Google Calendar's ICS file. It would take minutes. So I requested it myself and it was 26 megs. It's clear that Google calendar doesn't care deeply about iCal and that's disappointing. This could easily be solved if they'd support some kind of OData like URL-based query for fromdate=, todate=. In this case, the DakBoard was getting 26 megs over and over to just show a few weeks of appointments. I literally had appointments from 2005 in the calendar. I decided that since I'd declared Outlook my authoritative source for my calendar that I'd take an archive (one time snapshot) of my iCal and then delete all my calendar items from Google Calendar and re-sync, one way, from the authoritative source, going back 1 year. I'm likely a rare case but it's worth noting in case you bump into this.

All in all, this can easily be done in a short few hours if you have a Pi and a monitor. The time will be spent making it "sanitary." Making the cables perfect, hanging it on the wall, hiding the cables, then tweaking the screen to be perfect.

DakBoard has a free option that works great, or a Premium subscription that gives you even more control. Again, it depends on your web/art ability, and your patience. This is a fun new world that I'm excited to get involved with and my family is already stoked about this new display as we enter the holiday season.

Eric James Soltys
November 21, 2018 7:39
If the cron job is turning off the screen, and the screen is powering the Pi, would the Pi turn off as well, or is it just the display panel in the monitor that's turned off? Alternately, is there a command that turns off the backlight while leaving the LCD on?

1) RPis are surprisingly sensitive to power glitches, and will often corrupt the SD card. Create a backup image.

2) You can save power & money by using an Pi Zero W instead.

3) This is likely overkill, but I took the time to get the Pi Zero to mount the SD card read-only and do all the writes to a RAM disk.
The best link I found is this one.
After mounting the SD read-only, my DakBoard has been running stably for months; before doing that, it corrupted the SD card within 6 weeks.

thanks for the writeup! One question though:
You showed several layouts and orientations in the pictures - do you change them? Or did you choose one final layout and leave it as it is now?
Maybe another cool addition would be a movement sensor on that thing so it would turn on the screen when there is actually someone to look at the screen, save energy and money!

Sebastian
November 21, 2018 19:04
I have been trying to motivate myself to build a Magic Mirror for over a year now and this post only makes me want to do it that much more. I like the idea of the MM being able to use facial recog on the individual and show personalized info for example.

On a similar note I have some "plugin" ideas I'd like to build for the MM (or DAKBoard if it is "easy" to integrate with).

One way or another though I'm saving this into my "pending reads" folder and when I get around to buying a spare LCD monitor I'll finally sit my butt down and see about spinning one up.

As always, thanks for somehow knowing what's on my mind and posting about it.

You mention the free version, but it mentions only 2 calendars (and you mentioned you, wife, kid1, kid2).

Eric Burdo
November 24, 2018 7:06
I bought the SD card and Raspberry Pi 3 from the links you provided, but it turns out I should have bought a *micro* SD card instead.

Fernando
December 01, 2018 2:29
I was given a rather large heavy touchscreen display that was being tossed from my friend's medical office. It's missing the power supply, but that's replaceable. I was thinking of doing a project like this with it, and now I'm pretty sure that's exactly what I'm going to do.

Also, as I went to make this comment, anytime I click on any of the fields for the comments, I get redirected to a page about calendar quickstart, even though I get the text select cursor, and not the link select one. I had to tab through everything on the page, to get to the text boxes. :) It looks like there's an anchor tag surrounding your comment box. I'm in Chrome, if it helps.