HOW TO: Debug into a .NET XmlSerializer Generated Assembly

The XmlSerializer is a much maligned piece of software, but I have to tell you, it's the bomb.  We use it a lot here at Corillian. Recently we had to debug a pretty funky problem where an enum was writing out to an XML file, but wasn't reading back in. We suspected it was a namespace thing, but the XmlSerializer is such a black box, a lot of people really have trouble dealing with it. It inspires a trial-and-error style, while I prefer to debug and step around myself.

Here's how to debug into a generated assembly from the XmlSerializer.

3. Compile and run and step up to the line where the XmlSerializer is constructed, and step over that line.

4. Go to c:\documents and settings\[username]\local settings\temp and look at the most recently created *.cs file. Open that file, it will have a name like asdasdfs.0.cs. Note that there are *.pdbs in that folder as well.

5. Set a breakpoint anywhere in that generated file.

6. Debug to taste (see screenshot below) 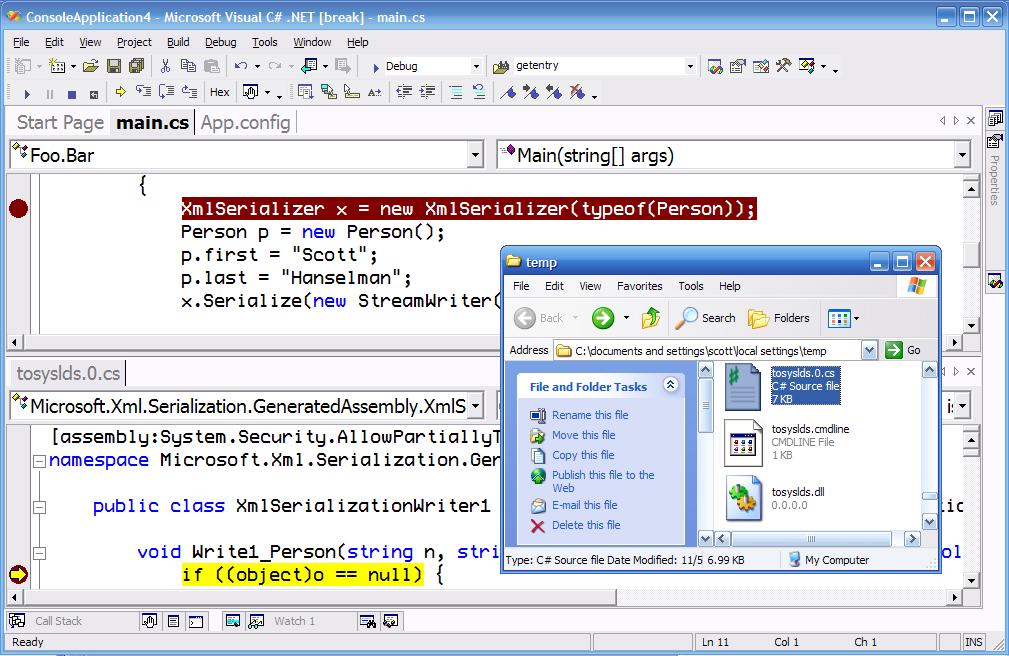 Scott Hanselman
November 08, 2004 20:36
Wierd coincidence, I helped someone debug a related problem last week; it turns out that this trick comes in handy if you generate a proxy for a WSDL that has a bad schema. This will manifest itself with a System.IO.FileNotFound exception when you hit the asmx page, what it's telling you is that the serializer tried to generate code for the schema but failed. KB article 823196 documents all this.