If you love your family and your kids, do not play Elder Scrolls IV: Oblivion - It's that good 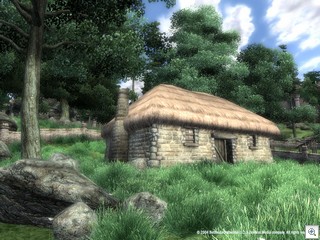 Darn that Phil Haack, he wrote a post on Oblivion as I was writing one on a plane yesterday. If I only had connectivity at 30,000 feet.

The Elder Scrolls IV: Oblivion is simply one of the best role-playing games ever made. [GameSpot]

Others are having similarly disturbing experiences:

Because the game is so damned addictive that when you're not playing, you wind up looking outside and thinking "man, that lighting model is really realistic!" before you remember you're not actually playing at that particular moment.

Even my wife has sat and played it with me for upwards of 30 minutes, which is a huge accomplishment if you ask me. However, "playing" the game with Mo meant "going for a stroll and looking at the scenery" which is something that you can really do for hours. I walked up a mountain over the course of two days, as I did the sun went down, dusk came, then the stars came out, then it started to rain. As we go towards the top of the mountain it began to snow.

There's been so many amazing moments. Once I found an empty camp and decided to sleep there and left my horse outside. I was awakened by a bandit whose bed I was apparently sleeping in. He had already killed my horse, the evil bastard. There's been times I've met a character I'd seen before and he's said "Oh, you again. How are you?"

There's such a sense that you are a part of a larger world that will (and does) continue without you. I've literally watched fights break out in front of me in a bar when some guy decided to pickpocket another. It wasn't scripted, it just happened.

One aside, to the mad fools who paid $500 for a new video card just to play this game, or just bought a whole new machine, seriously, please, get an Xbox360. Playing Oblivion on a 40" HDTV is just amazing. It's never crashed, no problems at all. I would be pretty frustrated if it were crashing often on a PC as some folks are reporting. (Interestingly enough, I've never had Guildwars crash on my PC...)

If you're playing Oblivion, leave a comment about something amazing or surprising that you've seen while playing the game. Here's an article called 64 Most Amazing Oblivion Moments.

World of Warcraft (in fact just about any MMORPG)
Sid Meiers Civilization Series
Practically any video game with the "RPG" tag attached to it, as this genre of videogame doesnt lend itself to the "pick and play for 10 minutes and then do something else" style of gaming

I was in a bar area and this woman walked past me, a cloud of smoke appeared with a small poof sound, her outfit changed to something wicked reminding me of a Samurai suit.

She sliced some dude up and jumped through the window and off the balcony.

Totally flipped me out.

Because I have a display device that'll do far beyond HDTV resolutions right in front of me. ;)

Brook
May 12, 2006 3:10
The defining moment for me was a quest in which I had to steal a ring from a Countess. After digging around and sweet talking her maid, I found out she keeps it in a jewelry box.

So I wait around and follow them as they go to bed. When they go into the room, I sneak in and hide in a dark corner. The Maid leaves and the Lady goes to sleep.

I make my move. I pick the lock and grab the ring from her box. As I leave I notice the count down the hall. But I haven't been spotted, so I go hide in the corner.

He comes in and goes to sleep. I try to leave again, but I see a guard on patrol down the hall. I close the door. Wait.

Open. He's walking away from me. I follow behind him and duck into a side hallway.

He leaves and comes back and heads back towards the room. When he's passed me, I duck past him and out the main door, pulse pounding and ring in hand.

I just love that sort of gameplay where I can rely on stealth and intrigue and not just swing a damn sword around.

Jokes aside, I religiously refuse to buy a XBox 360 or PS3 (I want both HD-DVD and Blue-Ray to die). PC games (and Nintendo) FTW!!!

Eric Lau
May 12, 2006 4:55
A complete "Oh Wow!" moment for me was when I was walking around the country side at night and came across a bandit who was attacking a courier for the newspaper who was travelling between cities on a horse. Astonishing! And this doesn't even talk about the glories which are the inside of the Oblivion Gates.

Tim Rayburn
May 12, 2006 5:12
My experience hasn't been quite so pleasant, having to fork over serious $ for video card upgrades on my PCs (I have to make sure BOTH my boys can play simultaneously). I haven't even had a chance to play yet other than to get in and verify that I've got acceptable frame rates.

Almost makes me want to go out and get an XBox...

Chris Brooks
May 12, 2006 16:04
Well this game is so DAMN buggy that i can hardly play for more than 15 minutes without it crashing or restarting the pc. I've read thru lot of posts and try to fix some issues with codecs and so (i've even installed the BETA patch) but crashes continue. ?'m sure the game doesn't like my system (AMD64 3200+, 1GB RAM, RADEON x800 XL) for whatever reason.

Ismael
May 12, 2006 18:52
Well I guess from reading this and the comments time to go get some more addictive games. As for the first comment WoW, World of Warcraft, is definately something you want to get into if you don't want to dumb massive hours and days of your life into it. Now I just have to decide if I want to buy something from Microsoft or just get it for PC and deal with the problems people get. Also anyone know if it is the same ATI bug that a lot of other RPG games are having issues with?

Darren Kopp
May 13, 2006 0:41
The wow moment for me was when I tried to assassinate an officer by sneaking into the barracks, I noticed a thieves guild member sneaking and stealing. I tried to pickpocket from him, failed, and we both got chased by the guards LOL!

However, being both an owner of the Xbox360 and an avid PC gamer, I disagree about the Xbox 360 part simply for one main reason, the mods. $2 for some silly looking, useless horse armor? meh.. How about game enhancing mods like Illumination Within, texture packs, user generated quests, and UI enhancements that will never see the green light of the Xbox 360.

Let's not forget about the Oblivion Construction Set that allows you to modify every part of the game to your liking. Some bad such as the nude textures that pinned the M rating on Oblivion to creative mods like the Magic Words mod which uses .NET and the Speech SDK to allow you to cast spells with your voice.

Alan le
May 13, 2006 3:15
As if this game didn't take up enough of my time. Now there are mods to contend with: http://planetelderscrolls.gamespy.com/View.php?view=Articles.Detail&id=41

Haacked
May 13, 2006 9:08
I have about enough time to get in and play for 30 minutes at a time, which really isn't much. However the first 30 minutes were spectacular. I looked up at the stars and watched as night turned into day. Yes, 30 minutes lost watching sunrise, but it was the best damn sunrise I've seen in a video game hands down.

Bil Simser
May 16, 2006 18:01
I've been playing it for about 2 weeks on the 360, and initially had a horrible experience. It would hang for a minute or more just loading areas. And going through the menus was a complete disaster. Then I found the rebuild cache trick. Hold down the A button while it's loading and it will rebuild the cache on the HDD. Before I did that, I cleaned up some junk from the marketplace I had downloaded and since then its been fantastic. (I will still hold the A button ever other day or so...)

Last night I saw to Legion Forrest guys (not sure if that's their correct name) have a fight to the death west of Bruma. Crazy stuff.

I have a general 360 question, though. When I was cleaning off the drive, I noticed that a large portion was reserved. That didn't surprise me, but it made me wonder something... Does this section include in game cache? Or is this section strictly for the system and the games have to fight with the user section of the disk?

Tim Coker
May 16, 2006 23:46
My Oblivion moment was the first time I went up to the citadel at the top of the mountain in the north of the map. I walked out to the overlook at dawn and was able to see the sun cast its first rays across a most incredible panorama of lakes, waterfalls and alpine meadows. Then wandering down through the fields, collecting new herbs and enjoying the sunshine. If you haven't played Oblivion yet, it's quite something!

Tim Sneath
May 17, 2006 17:20
Oblivion is such a bad game, it's amusing. This is no different than all the Halo loving that went around. If you're new to gaming, Halo and Oblivion are AMAZING. If you've been around for a decade, all you can think about when playing Halo is how bad a wolfenstein/doom/doom2/duke nukem 3d/quake/quake2/quake3/half life/unreal/tribes it is. Oblivion is just a bad FF3/FF7/MorrowWind/WoW/diablo/SpaceQuest.

people say how open ended the game is. But it isn't. You can't kill major characters and you can effect the world at all. Go into the university, port to the head chamber, steal the staff from the head guy. Repeat a couple days later, because the staff will just come back. Can you slay a king and take over his city? nope..*yawn*.

What makes it worse is the combat. The game is incredibly easy...and that's what appeals to people. If you use a bow or magic, put your points in speed and you'll _never_ get hit. Improve your sneak and you can stay in the shadow and kill anythying. The AI is sooo dumb.

It's great if you're a console player...but PC gamers have been playing this type of game for decades - we've moved on. Make Oblivion a multiplayer game (even just 4-16 players) and then you've got something - otherwise, Lerroy j0wns u.