Recently in on a post on the RESTful ASP.NET Web API framework I used curl to post JSON to an HTTP endpoint:

Curl is lovely and should be in your c:\utils folder and more importantly in your PATH. I have a UTILS folder in my Dropbox and in the PATH on all my machines. Whenever I find a useful no-install utility I put it in there.

Curl is great but it's still confusing enough to me that I don't use it enough. It's slightly obscure command-line switches are keeping me from using it on a regular basis.

For HTTP work there is a better utility called HTTPie at http://httpie.org. (It has nothing to do with IE (Internet Explorer)). For Mac and Linux folks who use Python all the time, it's easy to install, you just

For Windows folks who don't use Python it's a little harder to install, but it's worth it and I recommend you take a moment and set it up. You'll wonder how you lived without it.

First, go download Python. I got the x86 version of Python 3.2.3 cause it was the latest and I didn't think I needed the x64 one.

I then added c:\python32 and c:\python32\scripts to my path. I do this by hitting WinKey+Break, then Advanced, then Environment. 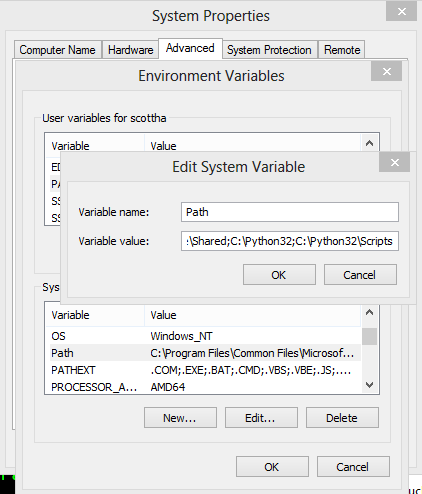 Second, download CURL. Yes, I realize the irony, but it's still a VERY useful tool. I downloaded the 7.27 binary SSL Win32 version, unblocked it, unzipped it and put it in C:\UTILS so it was automatically in my PATH.

Third, run this from an Administrator command prompt. Note again that it needs both curl.exe and python.exe in the PATH to run as it is. This should run without incident.

This should end with "successfully installed pip."

Pip is a Python package manager.

I'm recommending you install the development edge build of HTTPie rather than just "pip install httpie" as the developer is actively fixing Windows issues and just recently helped me with one.

So, to sum up what you need to run, in four lines, assuming curl.exe, python.exe and python scripts are all in your PATH.

You'll know it works if you can run "http" from the command line and get this output:

Here's where the fun happens. The syntax is VERY intuitive. Here I post some JSON to an endpoint that will echo it back.

It's just like using HTTP itself, except from the command line. The best part is that it will take name=value for strings and name:=value for non-strings and turn it into JSON!

There's lots more examples here https://github.com/jkbr/httpie/ and I encourage you to check it out. I'll leave you with a lovely PowerShell screenshot showing that HTTPie also does syntax highlighting at the command line!

Awesome. Expect to see this tool in all my Web API and JSON demos. Go get it and star it at GitHub.

Eric Falsken
August 17, 2012 22:57
Hey, this looks like a great tool and a great tutorial on setting up cUrl, Python via command line. But why not set the environment path variables via the command line as well? Here's some ways to do it: http://stackoverflow.com/questions/714877/setting-windows-powershell-path-variable

Mike Richter
August 17, 2012 23:14
Scott, doesn't Python on Windows come with easy install baked in? If so, you can "easy_install pip" to get pip. You can also probably "easy_install httpie" directly (but not the dev edge version).

Doug Finke
August 18, 2012 0:04
Check out Fiddler's Composer tab for similar functionality. It doesn't have the cool pseudo-JSON syntax, but I find that copy-paste-modify from previous responses is quite easy and reduces errors.

John Peterson puts this technique to great use in his aspConf Intro to Web API session. Specifically, check out 40:25-43:00 where he GETs a resource, copies the JSON response, tweaks it and PUTs it, and then GETs it to show that the changes worked. Earlier in the session (32:20-34:20) he also shows tweaking the Content-Type header to toggle between XML, JSON, or whatever.

Oran Dennison
August 18, 2012 0:14
Whoops, I see you're already familiar with using Fiddler's Composer to post JSON here! Regardless, I hope this helps someone discover another one of Fiddler's under-utilized cool features.

Oran Dennison
August 18, 2012 0:26
Haha, and then I just now watched your 6-minute ASP.NET Web API video and you used Fiddler's Composer to do the exact same things as John Peterson (Accept/Content-Type and reposting modified JSON), but in a more compressed "Hanselminutes" manner! Awesome! I recommend folks check it out, from 3:30 until the end.

Oran Dennison
August 18, 2012 1:33
Steve - easy_install is on the way out and pip is recommended going forward so I thought I'd encourage folks to use the right stuff.

Mike - I wanted people to add it to the SYSTEM environment and not just their PowerShell profile.

Scott Hanselman
August 18, 2012 7:09
I you're using Chrome, there's a pretty good plugin/app/thing from Play Store (no idea what the correct nomenclature is) called Advanced REST Client that let's you do similar stuff.

It's not got the chic appeal of command line but is useful if you tend to do your debugging in Chrome.

Kevin Wilson
August 18, 2012 17:14
I used the Cygwin installer to get curl and python. This tool is awesome. Thanks for sharing!

William Wingler
August 18, 2012 17:48
Now with the Invoke-WebRequest, and Invoke-RestMethod in PS v.3 we will be able to replicate most of curls functionality. Get busy Doug Finke, : )

...along with many other goodies.

Personally, I just went through a fresh install of Windows 8 and had to update everything, and I do all this from the commandline. I don't use curl anymore, since

does the same thing.

Matt Oswald
August 20, 2012 7:12
We use webforms. We're pretty much stuffed for either curl or httpie correct? (At least with respect to put/post requests).

Trying to automate a smoke test has lead me to driving IE via automation (selenium), which is pretty painful.

Josh
August 20, 2012 13:47
Yes, pip is in the process of replacing easy_install, but the accepted way to bootstrap pip is still to easy_install pip (then never use easy_install again).

Another good alternative on Windows would be to use Chocalatey:

Certainly the combined installation of both Chocalatey and then pip from the command line is a shorter, subtler two line dance:

Note that the cinst pip would also install Python as needed.

(Also, I still find it fascinating the way Chocalatey uses powershell as its CURL and script engine all in one CMD command line.)

This is awesome. Scott, thanks for the tip.

Joel Kauffman
August 20, 2012 16:31
@Josh - Yeah, I'm suffering the same issues - it looked like the "session" option might work, but no luck with forms-based authentication. Or at least I couldn't get --session to work with --form POST. If someone does know of a way, that'd be awesome....

Scott Frost
August 20, 2012 20:03
Any suggestions on how to get this to work behind an NTLM proxy? I was able to get curl to work, by setting a proxy in the environment setting and passing my username and password. However, running the python script failed at create connection since the proxy server refused it.

Robert Edwards
August 21, 2012 11:39
Another great alternative for editing your Env Vars is a free Rapid Environment Editor at http://www.rapidee.com/. I sure have that in my c:\utils.

Your Curl link seems a bit off.

Matthew Erbs
August 22, 2012 11:34
You can also just, you know, use a browser to download distribute_install.py and get-pip.py :) (just dump those links into an address bar). Didn't know easy_install will install pip, though, that will save me some time in the future!

Scott Hanselman
August 23, 2012 6:53
I do prefer to use Poster, which is a Firefox plugin and makes creating HTTP request easy. Fiddler also rocks.

This is a really great article! That is all. :)

Dan Atkinson
August 25, 2012 6:29
I dont want to install python on my machine - as this is so Un-Windows :-)
But I also would like to use that tool.
Therefore I started a .net port of this tool on github

BTW, I believe that it should have been C:\Python32\Tools\Scripts instead of C:\Python32\Scripts.

Tugberk
September 27, 2012 15:42
@Robert I managed to get this working behind our proxy, as detailed below. I don't whether this approach can be easily adapted to cover your particular case, but even if not it may be of some use to others.

and added the following lines to the beginning of the download_setuptools() method before running the script using python dist_setup.py:


I then downloaded the second script using
curl -x [proxy ip] -k https://raw.github.com/pypa/pip/master/contrib/get-pip.py > get-pip.py
and similarly inserted the same lines above to the beginning of the unpack() method at the end of the script. Running the modified script using python get-pip.py successfully installed pip.

Finally, I provided the --proxy parameter to pip to successfully complete the install of httpie:

I've been using Chrome's Advanced Web Client with much success but I find it's lacking a good request library to organise those large numbers of sample HTTP requests what are a typical by-product of a RESTful based dev project. HTTPIE gives me much more flexibilty in this regard.

By the way, the Pip installation failed to work for me using Python 3.X (Windows 8). Not to worry as I sailed through it after a quick install of Python 2.2.7. I would recommend this well written tutorial for those who run into similar installation difficulties.

Reuben
December 03, 2012 2:25
Scott, I still cant get why are you using curl if you have fiddeler installed?

How did you get the highlighting to work in your powershell console? When I run *http* in a PW console, I see ASCII gibberish like below:

Cosma Ioan
April 24, 2013 6:21
Anyone from you tried portable version of python and httpie? Asking because my colleague wanted to use httpie and ended at last step (some error, don't remember). So I decided to install httpie on my computer and commit to svn so everybody in our team can use it without installation.

Didn't succeeded, because easy install writes full absolute paths to python script. One quick workaround is to remove the line with absolute path, but imo it is not bulletproof generaly.