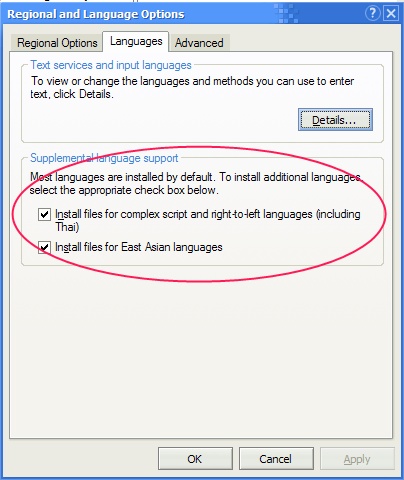 A good reminder from Michael Kaplan on international support in Windows.

One of the first things I do when I install any english version if Windows is to head to Control Panel|Regional and Language Options and tick these two checkboxes. It's a great way to get right of those pesky black squares.

"Every version of Windows 2000, Windows XP Home, Windows XP Professional, and Windows Server 2003 contains all of the international support"

I've got lots of friends who's parent or parent would really prefer to surf and email in their native language, and they don't realize their language may be a checkbox or font away.

P.S. Some folks don't realize that the reason folks says "i18n" is because there's eighteen letters between the i and n in internationalization. ;)

RichB
March 31, 2005 15:06
While I would agree that international support in Windows XP is miles better than previous versions, I don't understand why Microsoft doesn't provide multi-language support for the operating system out-of-the-box like Unix and Mac systems. I've got Japanese Windows XP installed on my machine and, while most of the time it doesn't cause me too many problems, there are times when I would like to able to change the operating system's base language to English (e.g. when troubleshooting a problem). This sort of thing is possible on English Windows XP with the MUI (http://www.microsoft.com/globaldev/DrIntl/faqs/muifaq.mspx) but, as far as I know, is not possible with any other language version of Windows XP. Is that correct? Of course, even if it was, the MUI is not available for retail purchase by individual customers! I can't figure out that one either.

The bottom line is, in this day and age, this functionality should be available out-of-the-box as a standard component of the operating system.

travis
April 01, 2005 0:48
Yup, that's the first thing I do when I install Windows! And for Asian languages, IMEs are available, so you can even input double-byte language using English Windows. How excited I was when I first come across that with Windows 2000!