There's been a lot of enthusiasm lately about the direction that ASP.NET is going lately, and rightfully so.

However, while ASP.NET 5 is cool and exciting, it's also not yet released (at the time of this writing, Beta 8 is being worked on). There are very cool things happening around ASP.NET 4.6 which is released and ready to go live today. Something else that's VERY cool that I want to explore today is ASP.NET WebHooks, which just came out as a preview and is being actively worked on.

Just as there's Web Forms, MVC, SignalR, Web API and they are all components within ASP.NET, you can think of Web Hooks as another member of the ASP.NET family of technologies. When you want it, it's there to plug in. If you don't use it, it costs you nothing in weight or runtime.

Let's start with the What Are They part of the conversation. WebHooks are a convention. They are HTTP callbacks. Moreover, they are "user-defined HTTP callbacks." You and/or your app signs up for notification when something happens and your URL endpoint will get an HTTP POST when that thing happens. WebHooks can and should be RESTful as well. That means if you have a nice RESTful Web API then adding WebHooks to your application should not only be easy, it should a natural and clean extension.

So what? Why do we need a library for this?

Technically you don't, of course. You could theoretically implement the WebHooks pattern with an HttpHandler if you felt you had something to prove. You could more reasonably do it with ASP.NET Web API, but the general thinking is that if there's a clear and common pattern for doing something then it should be made easier and codified for correctness.

Even more, since WebHooks is such a common pattern and it's being used by folks like Dropbox, GitHub,MailChimp, PayPal, Pusher, Salesforce, Slack, Stripe, Trello, and WordPress then it'd be nice if ASP.NET came with support for these right out of the box. And it does. Support for receiving all of these and more is included.

There is also a need for easy ways for your applications to send events as WebHooks. In order to do that you need to manage and store subscriptions, and when the time comes to correctly make the callbacks to the right set of subscribers.

ASP.NET WebHooks is open source, being actively developed on GitHub and is targeting ASP.NET Web API 2 and ASP.NET MVC 5 today. It helps deal with the administrivia involved in dealing with WebHooks. It was announced on the Microsoft WebDev blog (you should subscribe) a few weeks back.

There's some great docs already being written but the most interesting bits are in the many examples.

When you install ASP.NET WebHooks you get a WebHook Handler that is the receiver to accept WebHook requests from services. Using a GitHub WebHook as an example, you can easily make a new project then publish it to Azure WebSites. GitHub WebHooks are required to use SSL for their transport which could be a barrier, but Azure WebSites using the *.azurewebsites.net domain get SSL for free. This will make your first WebHook and testing easier.

A good starter WebHook to try creating is one that gets called when an event happens on GitHub. For example, you might want a notification when someone comments on a GitHub issue as a first step in creating a GitHub bot.

The default routing structure is https://<host>/api/webhooks/incoming/<receiver> which you'll put in your GitHub repository's settings, along with a SHA256 hash or some other big secret. The secret is then put in a config setting called MS_WebHookReceiverSecret_GitHub in this example.

In this tiny example, the "action" string will contain "issues" if someone comments on an issue (meaning it's an event coming from the "issues" source).

Once you've been triggered by a WebHook callback, you can decide what to do about it. You might want to simply respond, log something, or start a more sophisticated process. There's even a way to trigger an Azure WebJob with this new extension.

Sending WebHooks is similarly simple and there's already a great post on how to get started here. Finally there's even some skunkworks tooling by Brady Gaster that plugs into Visual Studio 2015 and makes things even easier. 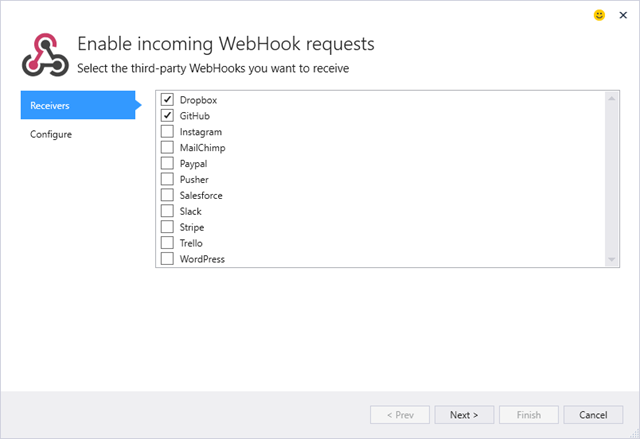 Go check out ASP.NET Web Hooks and give your feedback in the GitHub issues or directly to Henrik or Brady on Twitter!

Sponsor: Thanks to my friends and Infragistics for sponsoring the feed this week. Responsive web design on any browser, any platform and any device with Infragistics jQuery/HTML5 Controls.  Get super-charged performance with the world’s fastest HTML5 Grid - Download for free now!

Comment on this post [15]
Share on Twitter or Facebook or use the Permalink
October 03, 2015 4:30
This seems like a really interesting (and unexpected?) trend that is developing. It's almost as if it's a new type of web service -- out of the blue. Of course, there are REST services and SOAP services. But this appears to be a cross between that and a Pub-Sub model? I have been watching the very active posts from the ASP.NET blog around this topic. Seems really cool and well-made. It will definitely be worth a look into it to really start seeing the benefits and implications. I am also thinking it would be great to have a resource that looks into and compares/contrasts the different types of inter-service communication and see how they all line up, as there does seem to be some overlap (when you start to consider EventHubs, SignalR, etc).

Mike-EEE
October 03, 2015 5:49
I'm really happy to see this. I started using MailChimp WAY back when they first started and had to just use a custom coded .ashx file to be the receiver. It'll be nice to have a little more standard convention around it so I don't have to do as much of the work.

Kevin
October 03, 2015 12:24
Web hooks or Web Sockets? Web Sockets would seem to be the more robust technology choice which doesn't require bespoke client implementations to take advantage of the technology. Are Web Sockets supported in ASP.NET 5?

Vince
October 03, 2015 21:58
Mike - there's definitely echoes of the past but the key differences IMHO is embracing how HTTP and the web *wants* to work. REST isn't just a buzzword. SOAP and WS-*.* buried a bunch do stuff inside the body of the message.

Vince - yes we can do web sockets. See SignalR. But you're, respectfully, mixing apples and oranges. Web sockets are best for signaling over a persistent connection. Web Hooos are for pub sub that gets set up and may not be called for days or weeks. When they do get call, it's likely a little here and a little there. They are very different patterns.

Scott Hanselman
October 05, 2015 11:53
This StackOverflow question Difference between ASP.NET WebHooks and Signal-R is worth a read.

Rehan Saeed
October 05, 2015 15:52
Very interesting stuff. Push notifications to your web application out of the box. Happy we don't have to wait to ASP.NET 5 to see this.

Miguel De La Rosa
October 05, 2015 19:59
Gotta be honest, WebHooks feels brittle to me, like integrating systems with duct tape. It's unreliable messaging with at-least-once delivery and no standard around retries.

I guess as long as I'm ok with things working most (but not all) of the time then WebHooks are better than nothing, but this isn't something I'd use to build, say, a banking system.

If you can't afford to lose data and want asynchronous events, then you need to use a queue with durable messages.

On the sender side, WebHooks are typically retried several times until a 2xx status code is received. This can be made as reliable as you want. For example, Paypal and Stripe, both payment systems, do this thoroughly but most others do it well too.

On the receiver side, you can enqueue the incoming request and persist it until it has been processed so that nothing is getting lost. We help you with this by making it easy to enqueue incoming requests using a special handler called QueueHandler which is described [1].

Finally, the WebHooks request themselves typically have a unique ID so that you can keep track of which ones have been processed.

All in all, there are plenty of ways making this as reliable as you need/want :)

Henrik Frystyk Nielsen
October 06, 2015 6:32
@Scott/@Henrik this would be awesome to get WebHooks into Yammer. Who is best to get in contact with?

Neel
October 17, 2015 3:31
Hope to see webhook support from Office 365. Currently, the streaming subscription API in EWS is not easy to use.

WebHooks and SignalR as both use for event notification. Than which is more useful if we need to build windows or web chat like application. for me its really confusing to choose from one of them. Can any one please suggest which is better to use.

@ashish
October 18, 2015 14:00
What is the advantages of using Webhooks over webservices or ordinary http requests ?

Ahmed Said
October 21, 2015 5:15
Hello,
I just took some Microsoft C# classes, and I wrote my first app. However now I need to implement webhooks. I have someone sending them to me, so I need to make a receiver.
I am a little unclear on how to proceed with this. The asp.net site has tutorials on forms, pages, MVC, web api, etc etc. It seems from what I have read, I should be using MVC, but all the tutorials have me making a movie website with a SQL db in the back. While interesting, I am left wondering what I need to read up on next, or what tutorial to take so that I understand how to implement webhooks.
I'd like to have a site that is on a server, which is listening for webhooks, and when I get one, read in the json, and pull out some data. From there I'll query SQL and create a new output file which will contain some information from the json and the SQL db query.

There are so many technologies, but it seems like MVC is the direction all the tutorials are pointing. Then I see someone made webhooks on youtube (but not for a custom thing) and they create a demo making a web api site.

Anyway I'd love some direction on what to learn next, so I can understand the correct technology to use webhooks with, and then read and take the correct tutorials so that this page here makes sense to me.