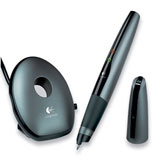 I really respect a company that not only releases a great product, but also updates it to include new functionality. Especially with just new software. The Logitech IO2 pen is a really cool idea. The original IO was ahead of its time, but I loved using it. I actually sold it on eBay and now use the Logitech IO2.

The new IO2 is smaller, has a longer battery life, more memory, and more importantly it's more pen-like. I recently updated from version 3.3 to 3.5 of their software and it includes very clever new technology they call "ioTags." My first thought was, hm, smart tags for a pen? This is actually cool because it works the

way my brain does. I typically cover a page in notes and then only a section of the paper needs some action - an email, a calendar appt, etc. Their tag concept has you circle a capital letter (the action, like "E" for email) and draw a vertical line down for context.

I also noticed that they have released a Google Desktop Search Plugin that makes their .PEN files searchable via Google's local search. It looks like Google Desktop Search is so popular that you really MUST release a filter for your file's format or you'll be left out in the cold. All the better for the user.

Not only that, but they have a .NET SDK available to extend the pen! It's been on my queue for a while, so long in fact that it's embarrassing.

I'm writing an upcoming article for MSDN's Coding4Fun where I extend the IO2 Pen with direct support for blog posts from the pen. I hit a snag with all the .NET 2.0 betas on my system, but I'm back in business. What better combination but blogging and a digital pen?

IDEA: Can we extend PocketMod with Anoto paper/pattern support for pens like the IO?

Comment on this post [2]
Share on Twitter or Facebook or use the Permalink
October 31, 2005 13:42
Another idea would be to add OneNote support. Maybe have it sync everything since the previous sync to a new OneNote page titled with the date/time. I don't own the pen and haven't looked at the SDK yet, but would it be possible to export the strokes to OneNote without it parsing them into text? I also like the idea of extending PocketMod with the Anoto paper/pattern. If these two ideas were implemented I think I'd have to buy one.