Many Raspberry Pi projects - How can you not love a tiny computer? 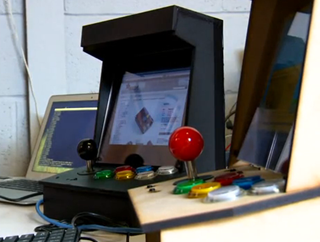 How can you not love a tiny computer? I posted about Top 10 Raspberry Pi Myths and Truths and since then I'm up to four Raspberry Pi devices. The most recent is the new Raspberry Pi "Model B" that includes 512 megs of RAM.

Sure, Raspberry Pis aren't fast, but what they lack in performance they make up for with chutzpah. They have a nice GPU as well which will decode 1080p MP4 video in hardware and play it just fine. Even better, for about $4 you can get a license to unlock MPEG-2 or VC-1 decoding in hardware.

I also have a Netduino and Netduino Plus as well as an Arduino that I use with the greatest FPS Controller in history, the SpaceTec SpaceOrb along with a custom OrbShield that provides a bridge between the RS-232 Serial Port and the Arduino.

All these devices are very reasonably priced and a great fun for kids or adults.  Next I'm looking at the PIX-6T4 "game console" that lets you write tiny games in C# on a Netduino Mini or perhaps a Netduino Go.

Don't listen to the folks who write negative headlines about the Raspberry Pi. Sure, it's the wild west but with a little patience you'll do fine. There's an amazing community around the Raspberry Pi.

The amount of excitement around these tiny machines is amazing. There's even a Kickstarter for a "Picade" tiny arcade cabinet.

To make things easier once you get your Pi, I do recommend the Adafruit Raspberry Pi Budget Pack if you don't want to go hunting for parts. This kit includes a great little clear case, a 4 gig SD Card (actually a mini with an adapter, which is great since the Netduino Plus has a mini SD slot), cables and power, but best of all, a breadboard, wires and a lovely little ribbon cable and "cobbler" that makes it super easy to keep things tidy while still messing with the Raspberry Pi's GPIO (General Purpose Input Output) connections. 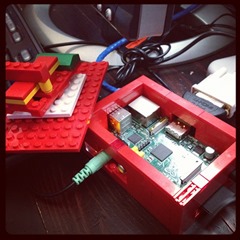 What's great about the Raspberry Pi and small devices like it isn't the price -although that's great - it's that the Raspberry Pi has a GPIO and HDMI. This means it's the easiest and cheapest little PC that can talk to the outside world's many hardware devices. Having the combination of  HDMI out (for your TV) and GPIO (for everything else) means it's extremely accessible to the beginner.

So I've got four now. Some friends have tweeted me saying that they bought one Raspberry Pi and haven't gotten around to doing antyhing with it, usually because they aren't sure WHAT to use it for.

Here's what my Pi's are currently doing:

I'm sure there are more reasons to buy more Raspberry Pis. Here's a few.

These are some exciting and fun projects for you to explore with Raspberry Pi that might make your Pi feel more useful and get you playing today!

Be sure to check out the Element 14 Community Site for Raspberry Pi. I also love AdaFruit and their Pi-related products like the Adafruit Pi Box (I have 2) or the Budget Pack (I have 1).

I used my first one so hard that it broke. I bought a second one, and then support for it dried up, and then it disappeared from the planet, and I moved on to other things...

I even had a PS2 controller of the same style, and a usb ps2 adapter so I could use it on a computer. but it just wasn't the same as the sporb was.

John Gardner
November 09, 2012 5:09
I didn't realize you have to buy licenses to decode media. How come ffmpeg and VLC can do it on my machine when I've never paid a cent?

I've already bought one Raspberry PI to act as a media center, and it's on its way now. If it works as nicely as I expect, I intend to buy at least 3 more, as media centers for the other 2 TVs at home and one to play around with. And probably one to act as my home server. I just have to find a way to wire up the entire place for ethernet without making too much of a mess.

configurator
November 09, 2012 5:26
You mentioned that you use RaspBMC as your AirPlay catcher to play videos. I do the same thing, but I find that the performace sucks: it takes a while for the video to start and once it starts, it sometimes stutters. Now, for audio and swiping through photos it's perfectly reasonable.

Do you have these issues as well? Or is it just me?

Giedrius
November 09, 2012 12:07
Unfortunately Mono on the Raspberry is a bit broken. It's something with the hard-float ABI. You can try easily see it if you open the interactive shell. Try "csharp", wait till the prompt opens and type "DateTime.Now();". Tried this on both latest Raspbian with hard-float and latest ArchLinux with hard-float. The Debian Wheezy soft-float (armel) seems to work, but I had lots of problems with apt-get.

Jan
November 09, 2012 20:33
I am supporting the Eve Alpha Kickstarter project as it looks a great way to add a range of remote sensors to a Raspberry Pi via radio links - take a look at Eve Alpha. My plan is to explore the interaction of multiple sensors.

Mike Griffiths
November 09, 2012 21:02
Another cool thing you can do with it is Phidgets . Super easy interaction with USB connected sensors and controllers and things.

Matthew
November 10, 2012 1:35
You should definitely try RiscOS for the Pi - it's where Microsoft nicked the taskbar from :)

To clear up any confusion, Netduino Plus 2 is definitely the best bank-for-buck of any NETMF board out there. We have a much different "marketing style" than other board manufacturers which may lead to confusion about price vs. performance/quality.

I don't want to put down any other NETMF products as we love NETMF, so let me give you a few points of differentiation instead...

There are a lot of features we've included on the boards but don't advertise. Things like ESD protection, power FETs to let you turn on/off power to shields, and Arduino shield compatibility.

On your last point...it's important to note that Netduinos are 5V tolerant. So simply plugging in an Arduino shield won't fry your Netduino. This is a major thing.

Netduinos are also designed for premium user-experience. There are no vestigial features which look like they're supported but which you can't use. There are no de-rated pins. Netduino "just works."

And we include all the premium features--both hardware and software--with every board. For us the most important thing is to focus on what is best for the user--which we believe is why Netduino is the most popular NETMF board.

I really appreciate your enthusiasm about NETMF. Whatever board is right for you, I look forward to seeing your NETMF creations.

The SpaceTec SpaceOrb 360 Controller! How did I miss your article, making it work with Windows 7?

Awesome. I see that Pete Brown is working on getting his Atari and Nintendo gear working too...ah, the memories :)

Thanks for sharing your hardware passion with us, Scott!

Chris Walker
November 12, 2012 13:03
Chris, thanks for you explanation and I think you should put such information on your site that newcomers as I am would know what the difference is (although I'm missing small board version (something like Arduino nano) in your product range, any plans to have one in near future?).

There are other similar systems too. One being the BeagleBone. And we use the BeagleBone to build an Remotly Operated Vehicle (ROV) to enable people to explore the waters.

OpenROV is a DIY community centered around underwater robots for exploration & adventure.
We're a group of amateur and professional ROV builders and operators
from over 50 countries who have a passion for exploring the deep.

Dominik Fretz
November 15, 2012 20:39
i have installed yate on my rpi and it works great as a SIP-google voice gateway.

plan to get one more to install openelec on it...

sriram r
November 16, 2012 17:20
I am currently building an easy to setup-box to take analog and digital inputs on my RPI-Extension-Board, packs a little lcd-display for important status updates, and is fully configurable in a browser.

You can watch ADC-Inputs in RealTime, and set a Pin of the Extension-Board to In/Out/ADC/PWM with just one click in the browser.

There will come possibilities to put in user-defined formulas to calculate metrics from ADC inputs, and to define simple if-then-else constructs.

I am currently looking for some people that would like to join the project, as I have little time atm.

Finally got around to setting up RPi for 5yo and 6yo. Can you recommend any games that work for your boys?

I'm also getting some laggy performance using AirPlay. From the comments in the raspbmc distribution suggest it's already been setup to take advantage of turbo mode. Did you tweak it further? If so, what values did you use?