Media Center Extenders and the Xbox 360 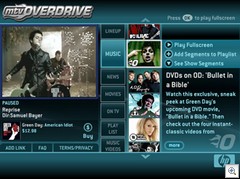 Just wanted to expand a bit and pull in information from a number of places on how the Xbox 360 displays the Media Center UI. This is a point of confusion for a lot of folks (myself included) and it's a darned interesting thing. The Media Center Sandbox blog has lots of great info on developing on the MCPC, not just now, but in the Vista timeframe. Michael Earls has a nice article on developing Add-Ins with .NET.

Clemens is working on something very cool that's clearly HTML-based and will work great in my Xbox360 as HTML-based apps use Remote Desktop functionality to render themselves remotely. While the UI is cool, you'll be very interested to hear how the backend works.

The MTV Overdrive (download for MCPC) and VH1 V-Spot are pretty amazing examples of what can be done with an MCPC Application that uses only DHTML, AJAX, Flash and Video, and consequently be remoted via RDP to the Xbox 360.

Note: You need the Update Rollup 2 to use the Xbox 360 as a Media Extender.

Charlie Owen offered me this table to express "what's rendered how" and reminded me to check the Media Center "Online Spotlight" more often. It'd be nice if there were an RSS feed I could check instead. NewsGator has a pretty nice interface as well, but their site doesn't mention Media Center 2005 so I'm not sure that it's been updated lately. It works fine though.

Eric
January 19, 2006 12:12
In regards to creating an add-on for XM Radio...This sounds like a big waste of programming time. I have been listening to XM Satellite through the Xbox 360 since launch (as well as the Xbox 1). XM Satellite has always been listed in the Media Center Extender under Online Spotlight. Just go to Music > XM Radio and enter your password and username. Great UI. Works perfectly. And it's already built in.

Brian Kvalheim
January 19, 2006 13:39
Great post, thanks for the info. Now to find some good MCMCL resources for developing.. Any suggestions? Does the Vista beta SDK have it?