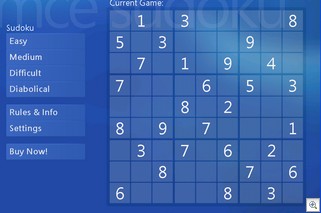 Russell Beattie has a interesting writeup on the whole "Casual Gaming" trend. Games delivered by browser are huge business. Last time I visited MSN Games site there were 200,000 people playing. Disney Channel has my niece and nephew captivated with cheesy, but free, Flash games.

Seems there would be great potential for games on Windows Media Center Edition. There's MCE Sudoku from at MediaCenterWare(KMS), and there's MCE Peaks from 10 Foot Games. BTW, KMS Software has released a number of nice titles for the Media Center.

Why aren't there more games for the Media Center PC? Perhaps ease of development? I poked around at the code for MCE Sudoku (review) and it's pretty hairy stuff. To be clear, it's a very nice implementation that was clearly written by folks who know and enjoy the game. However, the code involved, ActiveX controls, 22 javascript libraries - Media Center Development is AJAX. Sure, AJAX is cool, but let's be serious. It's hard. It's 1997. It's MacGyver Development at it's best, except instead of bailing wire and paper clips we use ActiveX controls and Javascript.

One of the surprises of the Xbox 360 has been the Xbox Live Arcade service. It, along with it's clever implementation of micro-payments and the often-updated blurs the usefulness of the slightly-less-often-updated Online Spotlight within the Media Center PC.

My conclusion: If there isn't an equivalent service like Xbox Live Arcade for the Media Center PC crowd, gems like MCE Sudoku are going to get lost in the shuffle. I'm actually a little surprised that MSN Games hasn't worked out a deal to create and distribute 10-foot versions of the myriad games available at MSN. They're mostly Flash, why isn't the Media Center an attractive option? Why write MCE applications in MC-HTML when I could port existing scalable Flash apps? I'd love to have a pile of Disney games for the kids to play, not to mention the strictly educational market.

Casey's got it right, what will happen is that there will be a lull (that's where we are now) then folks will start writing apps for the Media Center using WPF/WinFX and WinFX XAML Browser Applications and things will really take off. Until that day comes later this year, I will continue to enjoy Charlie's PDC Presentation that I sadly can't view via my Xbox 360 (I tried.) I'll get around to installing the February CTP and see how it goes.

casey chesnut
February 03, 2006 15:54
I would like to seem more party games for Media Center, KMS have a trivia game for Media Center that was great fun over Christmas with the family.
A proper Karaoke application would be good too.