This is a primarily technical blog, so I don't post pictures of pets (don't have any) or other personal bloggy things.  However, I am an Insulin-Dependant (Type 1) diabetic with an Insulin Pump and most folks know that, and I've blogged about Diabetes before: Scott's Diabetes Explained - The Airplane Analogy.

I've been diabetic for a decade, got it when I was 20.  It doesn't run in the family, nor do any of my relatives have Type I diabetes.  A few of the oldies have Type II, but these days who doesn't?  The theory is that I got the flu (possibly a coxsackie virus) and when it was all over I was left without a usable insulin-producing pancreas.

When I was diagnosed, my blood sugar was around 500 mg/dl and yours is probably 80 mg/dl.  (I currently aim for <= 150 mg/dl).  I had gone from 180 lbs to about 130 lbs because I was pissing away muscle.  We think I was uncontrolled as a diabetic for at least six month before folks noticed I was wasting away.  The weight came back on after I got under control.

Diabetes sucks egregiously.  It's the leading cause of blindness, kidney failure, and heart disease.  I have checked my blood sugar by pricking my finger between 5 and 10 times a day for the last 10 years (about 30,000 times so far).  Hurts every time.  Folks always ask "Does it still hurt?"  You get beaucoup callouses, but yes, it hurts.

I check my blood sugar (glucose) then make a decision based on some training they give you when you're diagnosed, some equations and hunches.  I took shots 4-6 times a day for six years.  Ironically, I hate needles and giving blood.  Go figure. :)

A month before my wife and I went on my first date I got an Insulin Pump, a Minimed 508.  It looks exactly like a pager with a clear tube coming out of it, except it costs $6000 US and delivers insulin.  (It does vibrate and have a remote control though.)

The pump doesn't know ANYTHING about my blood sugar, and there are no pumps on the open market today that can detect blood sugar either continuously or at an interval.  If you think your friend has one, you are either mistaken or they are in a clinical trial for something coming. I've done two clinical trials myself. 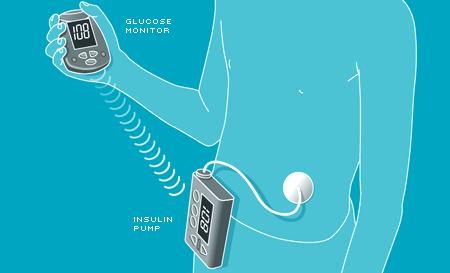 The pump is a one-way device - delivery of insulin only.  There is a small needle/canula that I stick in my side every 4 or 5 days.  I move it around; sometimes I feel like I'm putting holes in me faster than I can heal them.  It's a good thing though, as I used to have to stick a needle in me many times a day, now the needle and tube is in there all the time.  I keep the pump with me 24 hours a day, it can't be removed for more than a few minutes at a time (bathing, etc.)

Carbohydrates hit you fast - immediately and they spike blood sugar quickly.  If I ate that Granola Bar and didn't take any insulin, my BG would go to 200 mg/dl in short notice and likely higher.  Blood sugar is like a helium balloon, once it gets high, it likes to accelerate.

Protein hits you slow - in about 3 to 5 hours. Fiber will also hit you slow.  This is all that talk about the Gylcemic Index of food.  For example an apple without skin would hit faster than one with skin.  White bread hits faster than wheat.  You get the idea.  (Rice Cakes are horrible for you, by the way)

Now, let's say that dinner comes around and my blood sugar is 200 mg/dl.  That's too high and I'll need a "correction" as well as enough insulin to cover dinner.  I want to be at 100 mg/dl, but I'm at 200 mg/dl.  That's 2U (Remember 1U = 50 mg/dl) to correct, PLUS whatever I need for dinner. But, if dinner is at 3 pm for some reason, then I've still got some fractional amount of "active" insulin in me from lunch!  If I don't take it into consideration I could over correct and crash later.

Well, you get the idea.  Anyway, I got a NEW pump this weekend.  A Medtronic Paradigm 512 Insulin Pump with Wireless Blood Sugar Meter.  It's freaking awesome.

When I check my blood sugar on this meter, it immediately wirelessly transmits the reading to the pump.  (I "married them" with a dance of serial number registrations and encryption as a first setup step.)

The pump has a Wizard that I programmed earlier with all my details: Insulin sensitivity, type of Insulin, Carb/Insulin Ratio, etc.  The Wizard then keeps track of my blood sugar and active insulin.  If I count my carbs correctly, it will make a suggestion as to how many Units of Insulin to take.  Mind you, it's just a suggestion.  I have to make the final OK and/or adjustment for legal reasons.  God Forbid it should make a mistake, so I'm happy to be in the loop. :)

It works great.  Yesterday we went to the movies and I had an ENTIRE bag of Peanut Butter M&Ms (75g) and had perfect blood sugar afterwards.  This doesn't mean that I'll start eating crap.  Remember the Airplane Analogy - dramatic altitude changes are hard to control, steady and even is always the best bet.  But it was so much easier on the head to let a computer do the calculations that I've been doing 6 times a day in my head for the better part of ten years.  (Try not eating M&Ms for ten years, then see how YOUR demeanor changes. ;) )

For the next few years, the diabetic themselves will have to "close the loop" - but this pump and meter are a rockin' sweet next step and the coolest thing to happen to my diabetes in the last decade.

Comment on this post [6]
Share on Twitter or Facebook or use the Permalink
August 02, 2004 14:16
I feel your pain, dude. Literally. I’m still doing the shots for multiple reasons, among them being Bat Belt aversion. Yet another battery to worry about keeping charged.

I’d heard about the new Paradigm system, and it sounds cool. I’m not getting “pumped” about any delivery devices, however, until the loop is closed. I get excited every time I think about the Freestyle Navigator that’s in trial (http://www.biospace.com/ccis/news_story.cfm?StoryID=14521920&full=1).

Carry on, my man.

Nils Jonsson
August 04, 2004 14:18
So then does this do continous blood sugar sampling? You seemed to say that none did then mentioned this new pump which appears to...

Chris Kinsman
August 04, 2004 16:18
No, this just receives my blood sugar wirelessly at the moment I check it with the meter. Then it uses the information from the meter to run a wizard.

Scott Hanselman
August 12, 2004 3:00
I, too, have a MM 512 system. I think that it is great. I also think that your descriptions of IDDM I and your airplane analogy are the best that I have ever read. Thanks for putting words to my thoughts so eloquently! Great blog!

Your report on the Paradigm was GREAT -- I think you should publish it to the list!!! :-)

I usually read your technical posts but this is also up my alley since my wife is a Type I as well.