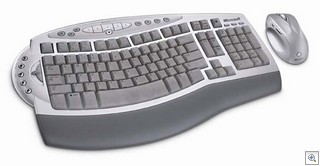 I was over at Office Depot today with a $15 off coupon in hand checking out printers. What I found, instead, was a deal on the usually overpriced Microsoft Wireless Laser Desktop 6000. Apparently it's being discounted deeply right now because it was on sale with a $40 off "instant rebate" (at the register, until 1/14/06) along with a $10 mail-in rebate (and I ALWAYS mail them in, as they always assume you won't) which brings it to a reasonable $49.99 which was made even more palletable with my $15 off coupon.

UPDATED: For the record, I completely agree with both Jeff and Diego that that greatest keyboard ever was, and still is, the Microsoft Natural Keyboard Pro. The fact that the lamer "Elite" version is still being sold is one of life's great mysteries along with Fox cancelling Family Guy the first time and Arrested Development this year. You can still buy the older keyboard, but you'll pay. One of the coolest features of that keyboard, other than the correctly oriented PageUp/Down keys, was the USB hub. It makes NO sense why you'd make a USB keyboard and not add a hub. Hell, why not add a USB port on the top so I can plug my USB disk into the thing straight up and down?

This new set has now replaced my Wireless Natural Multimedia desktop set which I'll likely give to my dad (He'll learn this tidbit when he reads my blog.)

If you can get this set for <$50, then I think it's a great deal and worth the upgrade. Overall I'm happy with it, and while I know that Logitech is coming up in the Desktop Set vertical market, I'm not ready to switch away from Microsoft.

P.S. Again realizing that you read this blog for the technical content, I am forced to bury pictures of my son in this post script to the post. Here's a shocking off-the-cuff bathtime photo of now-6-week-old Z. Also, for your enjoyment, I give you a complete list of Z's current nicknames. It's said, I know, but I'm told that most kids have at least a dozen good nicks going when they are this age. The current ones are, Zam-zam, Zamunda, Zamfransisco, Zee, Z-Money, Zippy (from Patrick Cauldwell's kids), Khulu (Zulu for Grandfather) and Poopmaster Flex.

Comment on this post [17]
Share on Twitter or Facebook or use the Permalink
January 09, 2006 11:10
I've been rockin' the Wireless Laser set for the last 3 weeks and it's pretty nice, I think. We've got 2 of them, actually. One for me and one of the wife and kids computer. My wife, at first, said, "you spent $70 on a keyboard and mouse?!" but said "oh ok, I see why this cost that much...it's REALLY nice" after using it for a few minutes. The mouse has improved just slightly since the original "wide base" design that emerged around late 2000-early 2001. I switched to it from the Logitech MX-700 mouse so you know I'm a spoiled mouse user.

There are only 2 things that annoy me with this keyboard/mouse set so far, and maybe you'll encounter them, too.

1. The "wireless signal is low/poor quality" dialog comes up on screen sometimes, even when there is nothing wrong w/ the signal at all and I haven't noticed any lapse in cursor movement/keystroke quality. Not sure why it does it.

2. Sometimes the "key up" signal from the keyboard doesn't make it to the receiver, so holding down the shift key to put one letter in caps ends up making the next 5-10 chars (depending on how fast you type) in caps also. Minor annoyance, it doesn't happen very often (maybe once or twice a day for me) but it's still something I noticed.

I agree about the right-click thing...almost makes u want to slam your finger on the right mouse button. I'll check back with you - I'm curious to see if you encouner the 2 things I mentioned.

David Hanselman
January 09, 2006 11:43
I'm not a big fan of wireless keyboards/mice, but the look of that keyboard is nice. The only thing it's missing for me is the standard 3x2 pgup/pgdn cluster.

I recently got the Microsoft Natural Ergo 4000 that Jeff Atwood recommended here:
http://www.codinghorror.com/blog/archives/000400.html

Marty Thompson
January 09, 2006 12:22
Jason - funny...I've been typing on this thing for about 4 hours now, and yes, I've seen BOTH of those things. I'm not sure I'm ready to check the box on the the "low signal" dialog to "never bother me again" but it's happened twice. The caps lock thing happened once. I was typing really fast and I suddenly was in CAPS lock mode. I figured it was me, so I hit CAPS lock, but that turned it on, so that means it was off earlier and the system thought that shift was held down.

How would we (two guys who have this happen) even start to compose bug reports back to Microsoft? I wonder if the keyboard folks (perhaps someone knows the Intellitype software/hardware guys and wants to forward a link?) read this blog or google for reviews of their stuff?

Scott Hanselman
January 09, 2006 15:00
> It makes NO sense why you'd make a USB keyboard and not add a hub. Hell, why not add a USB port on the top so I can plug my USB disk into the thing straight up and down?

The only keyboard with USB hub these days is the Logitech gamer-oriented one, the G15. At least that I know of..

I have the Logitech G5 mouse pictured in that post, but I don't have the keyboard (no need, since the MS 4000 is pretty much the BEST. KEYBOARD. EVER.) The G5 mouse, however, is inferior to the older MX518 IMO.

//Rutger
January 09, 2006 20:44
I have the Microsoft Wireless Desktop Elite.
http://www.microsoft.com/hardware/mouseandkeyboard/ProductDetails.aspx?pid=016&active_tab=overview

I love it, especially the scroll wheel built into the keyboard. I get a TON of use out of the media keys too. Since I use the calculator app about 70 times a day, that key comes in super handy, too. I can get a lot done with the keyboard without my fingers ever leaving to go the mouse, which is way cool.

Coleman Brumley
January 09, 2006 21:53
I actually hate this keyboard. For one, the breakdown of function keys in sets of 3 instead of sets of 4 (like on every freaking keyboard ever made) is mind-numbing to ridiculous. You'll be pressing F4 accidentally all day long, when you meant to press F5.

rizzo
January 09, 2006 22:38
I'm one of those that freak out with split keyboards :) I really liked the curvy layout of this keyboard when I experimented a similar model. There are a few things in MS keyboards that prevent me from using them at work (I have one at home)
- The stupid F key
- As rizzo said, the 3x3 grouping of F-buttons
- The weird (subjective) layout of the Delete/PgUp/PgDn group. I miss the extra gap between the ArrowUp and the End keys to find my way on that part of the keyboard.
- Also... Does anyone use that "Context menu" key? Take it out.

Sean Chase
January 09, 2006 23:35
Scott - That's a good question - I'm not really sure how we would compose bug reports on the product back to Microsoft. I wonder if maybe there is a feedback e-mail address for the intellitype software..?

Jean-Philippe Daigle
January 10, 2006 1:40
Jean-Philippe - it works just the same with a KVM because it still plugs the keyboard/usb plug directly into the KVM, so no worries there.

Scott
January 10, 2006 8:57
I really can't remember the USB hub on either of my two original Natural Keyboard Pros (one white, one black, the whte was destroyed by children and Coke [although I had done the same thing myself and washed it out just fine when I did -- I couldn't do the same after they did it], and the black was fine up until the Escape key stopped working, and I needed that to get into the BIOS to change a nagging parameter). I don't even think I had USB anything to connect with the first white one.

The Natural Internet Keyboard (which was the previous keyboard I used) worked great as a replacement. I remember it having a hub that I used for my memory sticks. Some of the special keys though stopped working for me (and it had quite a bit of age as well), so I found somebody selling the wired 4000 for only $55, and I used a $20 off coupon on that.

The 4000 feels just as good to type on, the arrow keys and the keys above the arrow keys are in their correct place (shocking after all the other keyboards I've seen come out of MS), although I really don't understand the point of the F-keys being special keys by default. At least it keeps the state of the function lock even between power ups.

I wish that I could use the zoom for scrolling, and I find the back and forward thumb keys to be... useless. If I could assign them to track forward and track backward in WinAmp, I'd be happy. :-S

Technically, that's an IRASER.
Infra Red Amplification by the Stimulated Emission of Radiation

David Totzke
January 11, 2006 18:28
Does anybody have experience using these keyboards along side IR headphones? There is interference and it seems related to mouse more than the keyboard. It's not so bad if I have the transmitter on the other end of the desk from the mouse, but I was just wondering if anyone has run into anything similar?

Coleman Brumley
March 17, 2006 14:05
I get the same thing with the low signal quality window popping up when theres actually nothing wrong. Has anyone else had issues with the software stopping their screensaver/monitor power saving working? Before I bought this set, my s/s would kick in at 10 mins, and the monitor would turn off after 20. Since installing this set, it does neither.