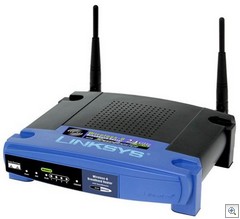 Just about two years ago Greg turned me on to alternate firmware for the ubiquitous Linksys WRT54G. This is the little router than could. You can pick these little guys up for a song but it's the thriving alternate firmware community that's so interesting.

LinksysInfo.org has the best listing of the different firmware projects available. If you concerned about compatibility, flip your router over, get the version numbers and check the matrix.

I've noticed some interesting stuff going on with Sveasoft, my previous firmware, so I started looking for an alternative. Sveasoft hasn't released a new version in a while and I've consistently had trouble VPN'ing back into my house from outsite. Additionally, the wife insists on 100% uptime with Vonage (as she should) so I really need the QoS (Quality of Service) to be solid. If I'm downloading 5 Gigs from MSDN at 800k/s over Comcast, I need her phone calls to NOT be dropped.

It was easy to setup and I was back in business and Mo was back on the phone in < 20 min. If you do use one of these firmwares, do use Kiwi's SYSLOG and turn on syslogd in the new Firmware, giving the IP address of the machine running Kiwi. This lets you see the router's boot up process and won't leave you staring at the lights (as I used to) wondering if it's coming back up.

Aside: There's even WRT54G firmware dedicated to sharing your bandwidth with other anarchists like-minded people. No one in my town though.

Comment on this post [5]
Share on Twitter or Facebook or use the Permalink
February 07, 2006 18:51
I use DD-WRT, too. It's worked great for me. The biggest feature for me is that the ability to pump up the transmit power from 35mw (the factory preset) to 250mw. That's still way under the legal limit, but now it reaches all over my house.

Jon Galloway
February 08, 2006 20:56
FON is a community that utilizes the DD-WRT image for free wireless access. They're selling the WRT54G for $25 with signup.
http://en.fon.com/shop/linksys-wrt54gl-router.php

Rich Moss
February 09, 2006 2:24
Greetings, my names Steve and i'm emailing you simply because you look like a clone of me! I've always heard the comment there's always a double of yourself walking around, guess I found you LOL. Anyrate here's a pic of me.

Stavos
February 10, 2006 5:52
Note that the V23 Final (12/25/05) release has a serious problem handing out DHCP addresses after 6 to 12 hours. I am having that exact problem on my WRT54GS v2.1 hardware with that release. You can read more about it at the forums for the dd-wrt release. I agree that the alternative fw is great but sometimes it is bleeding edge as well as leading edge.