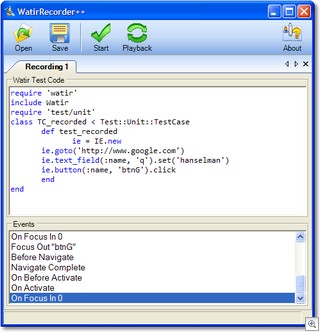 Rutger Smit has given the original WatirMaker an overhaul and we're re-releasing it as WatirRecorder++. Here's the original screencast if you want to see what it does. A roadmap will follow soon. Thanks Rutger!

This version compiles and runs under 1.1, but it upgrades smoothly to 2.0, so we'll probably do that one day. We're in the process of setting up an Open Source BSD Project at CodePlex.com so if you've made changes yourself, or you want to join up, now's the time. We'll get the source uploaded as soon as the permissions are setup. If you become a developer or want the source, you'll be able to interact with the Team System source control system using a number of clients. Be sure to read the manual.

UPDATE: We had some trouble getting everyone access on CodePlex so we're putting WatirMaker/WatirRecorder up on OpenQA.org, where Watir itself is hosted.

You can check out the source anonymously using the Subversion URL http://svn.openqa.org/svn/watir-recorder/trunk You can get the source by doing the following:

If you've never installed Watir, here's the easiest possible thing to do:

As an aside, keep an eye out for FireWatir. It's tricky to install and requires a number of bleeding edge things, but it's very shiny.

"This version compiles and runs under 1.1, but it upgrades smoothly to 2.0, so we'll probably do that one day."

Scott Hanselman
July 25, 2006 21:23
Thanks for this guide! It's just the hand-holding I needed to inspire me to take the time and see what the fuss is about.

Haacked
July 26, 2006 5:00
Love the new gui. I just installed watir last week to see if we can replace our nunitasp tests. Definitely will try watirmaker, Thanks!