Nintendo Switch and The Legend of Zelda: Breath of the Wild are an ABSOLUTE JOY

I bought a Nintendo Switch last week with my allowance and I'm utterly smitten. It's brilliant. It's absolutely brilliant. 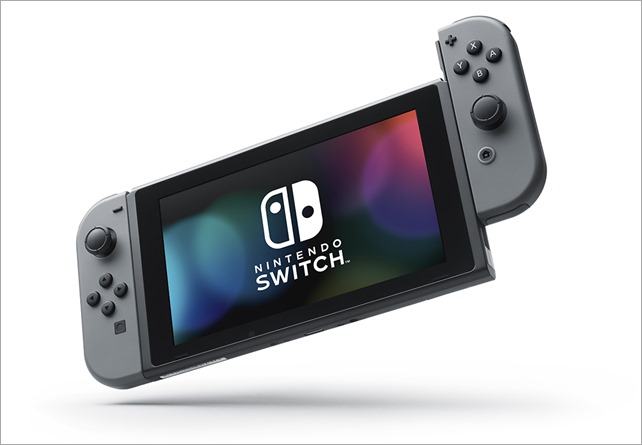 Now, to be clear, I'm neither a hardcore gamer nor a journalist. However, I am someone who grew up on Mario, enjoys Retrogaming and my Xbox One, and most of all, I know genius when I see it.

The Legend of Zelda: Breath of the Wild is a wonderful example of the very best that video games can offer as an art form in 2017. - Me

It may be the best video game ever. And it is because it borrows so much from the decades of refinement whose shoulders it stands upon.

Let's break this down into two halves. First, Zelda (which is available on WiiU and Switch), and later, the Switch itself.

If you don't feel like reading this, just trust me and buy a Switch and Zelda and bask in the hundreds of hours of joy and wonder it will bring you. It's the most fun I've had with a video game in recent memory. I also profoundly recommend the gorgeous hardcover The Legend of Zelda: Breath of the Wild: The Complete Official Guide Collector's Edition. The maps, the art, and the gentle walkthroughs are more fun than googling. The kids and I have enjoyed exploring the wilderness with the giant map unfurled in front of us.

Legend of Zelda: Breath of the Wild

It's HUGE. It's estimated at 360 square kilometers. They are saying it's 1.5x the Skyrim map and may be larger than Witcher 3. A cynic could call Breath of the Wild derivative, but an optimist like me says, well, they stole every game mechanic that was awesome over the last few decades, and made the near-perfect game. I love that this is a console launch game that is polished and has at LEAST 100 hours or more for the completist. 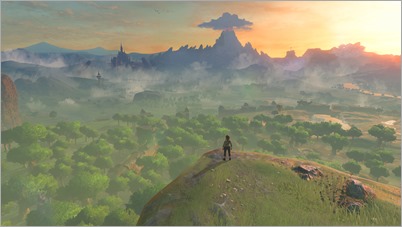 Complaints? Honestly, if I had to truly nit. And I mean really nit I'd say the durability of weapons, particularly swords, is annoying. I would make them last maybe 50% longer. Also, moving in and out of Shrines has a load screen that takes 10-15 seconds. But really, that's like saying "I wish Beyoncé was 5'8", not 5'7". I mean, REALLY. Beyoncé. Shush.

It's portable. Just like in the ad, you can pull the Switch out and leave. In my video below I also switch to portable AND have to re-sync the controllers, so there is one additional ceremony, but it's easy.

Short #video of my #nintendoswitch playing Zelda going from big screen to portable and back. pic.twitter.com/3a2yPtz01w

It feels like a console when it's plugged in. I've got it plugged into my TV and from my couch it looks as nice as any of my devices. Sure, it's not an Xbox One playing Tom Clancy: The Division. But it's a brilliant tradeoff for a device I can simply pick up and go outside with (which I've done, with considerable appreciation.)

I'm surprised that folks are complaining about the gaming resolution, frame rates, battery life, older processor, or said "it's just like an iPad with an HDMI cable." Here's why:

It's a fantastic device for the price and the promises, for the most part, were kept. That said, a few gentle warnings if you do get a Switch.

My Recommended Nintendo Switch accessories (I own each of these)

These accessories are by no means required (the Switch has everything you need out of the box) but these are all 4+ star rated and I've purchased them myself and appreciate them. Yes, I've gone overboard and my $300 Switch is now a $500 Switch BUT I HAVE NO REGERTS. ;)

My Predictions for the Nintendo Switch in 2017

I'm looking forward to seeing what the Nintendo Switch can become. I think/predict we'll see this on the Switch in 2017.

But at the same time, what's the nightmare scenario? Nothing happens. No games come out and I have a $500 Zelda-specific device. I'm totally OK with that give the joy of the last week. So between the worst-case scenario and the best case, no matter what happens it's awesome and I'm a satisfied customer.

* I've used Amazon referral links here. Please use them and you'll support this blog and my Amiibo Habit.

Sponsor: Get next level application monitoring with Raygun - The revolutionary software intelligence platform for your web and mobile apps. Take a free trial today!

David
March 12, 2017 3:39
Soooooo then, Mr. Hot Shot MSFT Exec Guy Who Loves Both Nintendo Switch and .NET... what you are saying is that we can build Switch games using .NET, and add to this Indie Game Community that you speak of???

OK so I wrote the above thinking that there is NO chance that Nintendo would support .NET, but now looking at their developer page, they support Unity...

And of course, Unity is supported mightily in Visual Studio. So is it actually already possible to write Nintendo Switch games using .NET?! THAT is the big story here, if so. :) :) :)

I was wondering how would the affiliate work with your allowance. If you get any money from this post could it go back to your allowance? Or does it end in the income part with everything else?
I guess it would be hacking/cheating the system :-).

Martin
March 12, 2017 8:28
Martin - It really is. As far as "bang for the buck" I'd say it's paid for itself already, so every hour beyond this is all gravy. Yes, I make some pocket money on the affiliate links but nothing to quit my job over. ;) I put it in the family pile and it's used for allowances.

Scott Hanselman
March 12, 2017 15:33
Liked your you tube presentation of 2015 November on iot and Machine learning on Azure on your data. Cool.. and came to your blog.
the key message of being in control of your own "Mydata" and learning insights can be hijacked. Yes you can figure out what causes you stress and who, by co-relating Calendar data with Stress. But on the flip side, how will you protect your data and such other Insights from your adversaries? Would using private access Handles be sufficient or can they be encrypted?
Above is just my thought, otherwise the use case is Great.
Cheers and Looking forward to hearing more on this.
Regards,

Debashis Mitra
March 12, 2017 16:22
The format of your review is incredibly well formed and easy to read or scan. Having spent most of my time on in code, google, and stackoverflow, I feel it's hard to read top-to-bottom anymore.

AlphaProspect
March 12, 2017 18:21
Looks fantastic! Been a huge fan of Zelda since Ocarina. Twilight was definitely my favorite with its awesome sword battles - esp. Ganondorf. Hyrule Historia is really cool if you follow the franchise.

Sounds like they borrowed elements from the Far Cry games too - crafting, tower maps, riding animals. Weapon degradation will be interesting.

Can't wait to, eventually, get one :)


P.S. I'm still holding out hope that one day I'll see another HaHa show, maybe on On.Net ;) Been 6 years since the last one

Suuure you're not a hardcore gamer, Scott ;)

I am a little bit torn on the Switch. I think I'm warming to the idea, but only if it gets the software to back it up.

If someone gets retroarch or something running on it, it could be the perfect machine.

Stephen Donaghy
March 13, 2017 9:17
Darn you Hanselman - I've been wanting to buy the Switch, purely to play Zelda, but have been managing to resist the urge, as I simply don't have the time to devote to playing games.
Your review, however, is severely testing my will power

Robert Armour
March 13, 2017 12:34
Thanks for the awesome review. I purchased Breath of the Wild Wii U for my children on launch day and were having a blast with it - it's an impressive game with lots of depth. I can see a Switch in our future as well!

Terry
March 13, 2017 13:05
I got myself an NVidia Shield as a post-Christmas present. It's pretty much the same hardware as the switch, but with an Android TV OS instead of Nintendo. So, it's not great for playing cutting-edge games, but...

It does support NES/Sega/Atari/etc emulators *very* well. So I'd expect switch to pick up NES capability pretty soon. The hard problems have already been solved (in open-source, no less: https://github.com/Rakashazi/emu-ex-plus-alpha).

It also acts as a great streamer. Not just a Plex client, but a Plex server with hardware-based H.264 reencoding. I have my media on a WD NAS - less powerful than yours - which simply can't reencode HD on the fly, so it limits my usage when travelling. Setting up a Plex server on the Shield using my NAS as a media source was pretty easy, and it works great!

Vitoc
March 13, 2017 17:02
I love the Switch. And Zelda - I think they've also added elements of Dark Souls to it.
Seems to be a lot of hate online for the Switch - from people who don't own one! Just smile, and know that you're enjoying the Switch no matter what these self styled experts say.
My favourite of the eshop games has to be Snipperclips, great multiplayer puzzle fun.
Rogue Trooper is going to be released later this year, I loved that game on PS2, so really looking forward to it.

Diarmuid
March 14, 2017 10:49
Combining their home and portable consoles is great but I really think Nintendo has missed a huge market by not supporting Android apps in some form, possibly their own market.

I can't justify buying the switch for occasional Nintendo gaming when I still need a separate tablet.

Pete
March 15, 2017 8:38
Until the Switch has proven itself to be supported by 3rd parties I'm not touching it with a barge pole - so not for a couple of years at least.

See Wii U as an example of epic fail.

The main problem I have with Nintendo systems is that they don't bother to get 3rd parties involved at launch. To me all I hear in the adverts is - yay new Switch, Mario Kart 256, Zelda 39, Mario 25341, give me a break and come out with something new Nintendo instead of relying 100% on former glories.

Peter
March 15, 2017 15:31
Great console indeed.
You may also enjoy this three-part documentary on the making of The Legend of Zelda:
The Beginning , Story and Characters, Open-Air Concept

ppolyzos
March 15, 2017 18:17
"A thrilling Indie Game Community. Yes, the launch titles are weak. There aren't a ton of launch games. Call it a soft launch. But give it a few months. " -- A thriving Indie scene on a game console would be really, really great but I can't see it happening, not unless some kind of 'jailbreak' becomes available but you only have to look at what happened with the 3DS to see that this is pretty much an unlikely scenario. I would so love for console developers to open up their platforms to the little guys and hobbyists.

Paul Irvine
March 26, 2017 14:05
About those microfiber clothes. I have glasses and these keep getting lost. My solution is Zeiss lens cleaners, they are single use moistened tissues that are safe to use on sensitive glass.

They are very useful for getting oily residue (finger smudges) off glasses and screens. I think every glasses wearing person should get a 200 pack of them.