NotNorthwind - Update #1 - All Your Northwind Are Belong To Us 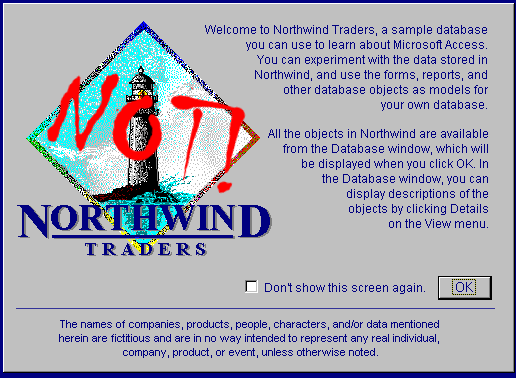 I posted a little rant against the Northwind Database a few weeks back, and suggested that we, the community, create a better demo database than Northwind.  I proposed the name NotNorthwind.

There were some varied and interesting responses.

Yes, it is far from perfect and could use some updating with regards to the date/time values and the category pictures, but those warts aside, it does a good job at what it was designed to do.

I feel the same way. I have to stifle a groan whenever I hear the word "Northwind" come out of presenter's mouth. I've even jokingly said that Microsoft ought to have an internal metric for new technologies called "TTN", "Time to Northwind." In mathematical terms:
Product Coolness = 1 / TTN

Enter NorthWind, the HTTP standard of databases, understood by virtually all Microsoft developers without need for preamble.  It just works.  With the words, "I'm using Northwind for my database." I now have the complete understanding of 95% of the people in the room - we're all on the same page - and I can continue with the actual point of the presentation or demo, which is not, has not, and probably will never be, "why this database isn't Northwind."

There were also a lot of great comments and ongoing discussion the CodePlex site's Discussions tab and project comments. We brainstormed alternative domains like Medical, Insurance, Media, and many others. Others suggested that AdventureWorks was a fine replacement.

ASIDE: Some folks suggested just updating the dates in Northwind to the present, but as attractive as the idea of adding ELEVEN YEARS to these columns is, I just didn't feel like doing this (Thanks to the folks on Twitter for their ideas, though!).

We had a SkypeCast call today at noon and it was agreed that Northwind does have some redeeming qualities. It's simple, it works, it's understood and there's a pile of demos written against it. We rethought the requirements.

As a small group, we've decided to extend Northwind. We'll still call it NotNorthwind (although Super Northwind 2000 and "Microsoft Visual Northwind Enabler SP2 RC0 Beta1 July Refresh Plus Pack" were also possibilities), though, but we want to add a bunch of features that should make it a more interesting database for demos/prototyping/experimenting.

It's worth pointing out that I (and we) are not interested in showcasing the shiniest, latest new thing in SQL2008 with this small effort. We're just trying to have a little fun, while updating a very old database with some interesting and fun features in the hopes that our demos/prototypes/experiments/whatever that use Northwind could possibly become more interesting.

That's about it. I'll update the Issue Trackers and we'll try another SkypeCast same time next Thursday around noon. I'll announce the SkypeCast URL on Twitter. (AYNABTU)

Comment on this post [21]
Share on Twitter or Facebook or use the Permalink
June 27, 2008 0:16
An Aside on the Aside, you could write up a simple script to go through systables and syscolums to auto update ALL datetime columns in the database, wouldn't be all that terrible, might be a worthy stopgap if the dates really bother you THAT much.

TheProkrammer - Ya, I thought about that, but I'm only about 70% good at SQL and didn't have the idioms on the tip of my tongue.

fetch next from update_datetime into @tablename, @columnname

TheProkrammer
June 27, 2008 2:05
The Northgale project is interesting NorthGale. Here is a quote from that page,

Anthony Yott
June 27, 2008 3:35
As corny as it sounds, I think developer/presenter acceptance of the extended Northwind database would increase substantially if it was simply called Northwind+. "NotNorthwind" would just create FUD. Just my 2 cents.

jhigh
June 27, 2008 8:39
Must agree with the "NotNorthwind" business. It IS Northwind after all, is it not? You extend the schema for new features, so it's basically Northwind Rel.2, Northwind+, Northwind2008, Northnorthwestwind or whatever other versioning scheme you may come up with.

fquednau
June 27, 2008 9:37
Anthony Yott - If the purpose of Hello World is to demonstrate a programming language then I find http://99-bottles-of-beer.net/ to be a good replacement. Typically it shows loops, conditional branching and a few irritating edge cases (like when there are 1 or 0 bottles) that seem to be annoyingly common in programming and prevent it from being a neat, tidy little solution.

[ICR]
June 27, 2008 9:56
INADD (I'm not a data dude) but it might be possible to make some significant design changes to NorthWind while maintaining backwards compatibility by using some of the techniques in "Refactoring Databases" by Scott W. Ambler and Pramod J. Sadalage.

Gavin Greig
June 27, 2008 10:06
It also seems to me that the incorporation of Universal Data Model would be a good fit as well. I've found these models to give good direction towards building flexible databases and systems. http://www.univdata.com/

https://me.yahoo.com/a/qzM4UyhvqsK_5YWqsyuw4FJQfIJ6xINLStY-
June 27, 2008 12:28
I totally agree that Northwind need to be extended. It's so not popular anymore that it doesn't even come installed on Microsoft SQL 2005. What I would like to see is a SQL file to run to extend Northwind in a predictable way.

What do you think Scott?

Arch4ngel
June 27, 2008 12:59
I will be interesting setting an example using Entity framework. We have a lot little examples, but lack more global samples applying best practices.

edddy
June 27, 2008 13:35
It sounds silly at first glance, but I think the points on naming make sense. "NotNorthwind" has an obviously negative tone to it and will probably discourage people from using it. As others have said, it IS Northwind. I would agree with a name that reflects that and also allows the DB to be extended in the future. Without getting into a formal major.minor[.build[.revision]] versioning scheme, "Northwind2008" is a pretty good choice so far, IMHO.

Jibbers42
June 27, 2008 14:01
I agree with the negative connotation of NotNorthwind, especially given that it IS Northwind. NorthwindPlus or something in that vein might be more appropriate. But I am also aware of the number of projects that never get off the ground because they can't get past the minutiae :)

@[ICR], the primary purpose of "Hello World" is not to demonstrate all the features, or even the most popular features, of a given language. Its primary purpose is to allow a new developer to accomplish something as quickly as possible in a new language while demonstrating its basic structure and syntax. The fact that it has no logic or even mildly complex code structures is the whole point.

As a long-time and widespread Northwind user, I'd prefer Southwind (the maker of aircraft cabin heaters that have kept me warm on many cold nights at 9,500 ft.).

I use Northwind rather than AdventureWorks because AW is overly normalized and the added joins confuse readers by diverting their attention to database structure and not the issue at hand.

I'd also suggest some additions:

Thanks for considering the above,

The presenter was playing around with Office Accounting and was showing how to flip between different datafiles. One was the default demo database, and the other was some stuff imported from Northwind. He went back and forth a couple of times, and went through the rest of the demo. Near the end there was an error that had to do with which database was currently connected. The presenter had anticipated this and offered the standard shirt to whoever knew what happened. I was the only one who recognized a name on the screen as having come from Northwind instead of the default database.

As annoying as it is, Northwind still has a warm fuzzy place in my heart.

kettch
July 01, 2008 7:58
Sounds nice, if you can use NotNorthwind in places where you can use Northwind (ie backwards compatible) that would be great.

How about membership, roles and profiles (users and passwords). Maybe just the standard ASP.NET membership (or something better :p ).

Also, I don't know if this is the case today with Northwind, but some tests for ORM patterns (like mapping one entity to two tables, or mapping two entities to one table).

Either way, it's a nice idea for a project, good luck with it!