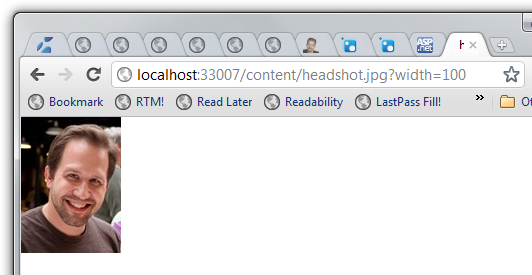 jutiapaboy.myopenid.com
November 01, 2011 2:15
Great Package with a great smile
Thanks Scott

saeid pahlevan
November 01, 2011 15:30
Scott, would it be possible System.Web.Helpers.WebImage to be plugable, so something like this could be used without neededing to rewrite the code-base?

lynn eriksen
November 02, 2011 19:23
Excellent. It's great to see developers thinking about and coding for their profit model to present a great experience to both casual and power users. The free version lets potential customers test out the quality of the product while still providing a commercial model for the developers to eventually profit from their work. Slick implementation and hopefully a sign of more good things to come.

I like the idea of you filtering out the best of the NuGet packages for us. In the widget world that is the second most pressing problem: filtering from the 50,000 available solutions to the ones that genuinely address your problem. Definitely a space where we need humans like yourself to take the time to review them.

Stuart Thompson
November 07, 2011 21:03
I wish I'd found some of the referenced blogs earlier. I recently wrote a similar online tool for resizing images in batch. It'd be interesting to see what I can get by incorporating this library into my back end.

I'd like to clarify that it's not just for small sites. It's been running large social networking sites for years, and there are at least 6 companies using it with 10-20TB image collections (it powers a lot of photo album systems). It's designed for web farms, Amazone EC2 clusters, and even..... Microsoft Azure. But it's efficient enough that a single virtual server can often power 100k users and 20TB of images.

And it will still work properly on the cheapest $5/mo shared hosting plan you can find - even in Low Trust. It even works on GoDaddy and RackSpace - the two most restrictive hosts I've ever heard of.


Performance-wise, it's just as fast as GDI (despite Bertrand's article, which he'll be updating soon). Default behavior is to favor quality over performance (since it's never more than a 40% difference even with the worst settings), but that IS adjustable.

Also, the next version will add WIC support as a plugin, so you can beat all of Bertrand's benchmarks by a tidy margin without digging into unamanged code yourself ;) Although WIC does provide a 2-4x perf boost, it won't deliver quite the same quality GDI is capable of.

Nathanael Jones
April 14, 2012 18:26
Scott, have you checked out this free image resizing / proxy service from Sencha, it is pretty awesome

BTW - I am the bald guy you met at Dev connections who walked with you & your brother down to registration. It was a pleasure getting a chance to meet you sir