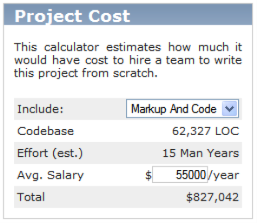 What a stunningly fabulous idea so elegantly executed. Ohloh (blog) (Phil turned me on to it) analyzes open source software. Not deep source analysis like Fisheye, but broad analysis that answers so many of the questions being asked like: Is it actively developed? Is it just one guy or a bunch? Is it well commented?

It says that DasBlog is about 13 Man Years of effort and would cost about $726k to write from scratch.  It's about 54k lines of code.

Subtext, a Fork of .Text managed by my other arch-nemesis Phil (I have a baker's dozens arch-nemisi (nemisissies?) Just kidding.) has 81k lines of code and would cost $1.1M over 15 Man Years.

What's really interesting is looking at more important projects like FireFox. Looks like only 50k lines of code? I wonder if that counts the rendering engine or if it's really that tight?

One odd problem/artifact, there's two DasBlog's listed. I'm not sure if this is because we had a CVS repository then moved to SVN, or what. We'll get the older one deleted.

As an aside, the flash-based charts they are from Maani.us and they are slick slick slick. A very inexpensive and permissive license and they consume a fairly intuitive XML format as their datasource. Hook those babies up to an HttpHandler and you've got great looking charts for your ASP.NET (or whatever) page.

Additional aside: There is a small transparency problem with the charts showing up with a gray background under Firefox 2 RC3, but I'm not sure if that's Flash's problem, Firefox's problem, or Ohloh's.

The real question that Ohloh may be able to shed some light on over the coming months is "Is Open Source a Crap Idea?" Seriously, though, it's interesting to see the levels of involvement, although there's no way to show the dozens of patches that were submitted to the DasBlog project by the community that were committed to the repository by me "glucopilot."

Jacob Proffitt
October 18, 2006 2:40
I know you're teasing, but I think the stat is saying Subtext COST more to build - not necessarily WORTH more ;)

Is ohloh counting all of the copies of the code in tags and branches, or is it just counting the trunk? More tags/branches could definitely skew the numbers.

Joshua Flanagan
October 18, 2006 2:47
Well I have a random code generator that generates tons and tons of markup that is all hidden via CSS display:none;. It's a nice way to pump up the cost count and prepare for the Google buyout. ;)

As far as I know, the tool is pointing at our trunk. But that LOC count seems a bit high. NCOVER counts us at 26805 points. Anyone know how many lines of code a point is roughly equivalent to?

Haacked
October 18, 2006 11:23
Ohloh is a good concept, but there are still lots of issues to work out. For example, the SubText stats really should include some metric that shows the hidden side of the project - namely the forking of .Text. Also, Ohloh is currently only able to deal with projects where the repository is completely open. Projects like DotNetNuke, FxCop, SubSonic, IronPython remain hidden due to either maintaining private repositories or using a non-CVS/SVN repository. Also, Ohloh doesn't account for projects that move repositories. With the numerous projects on GotDotNet and CodePlex it is highly likely that many .Net OS projects will be ignored for a while.