On the Train to the Indigo SDR in Seattle 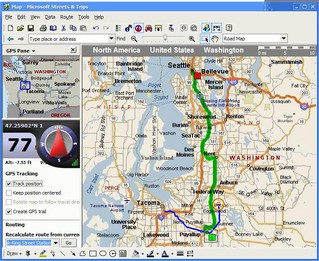 My boss Chris and I took the train to Settle today from Portland. It's pretty nice in Business Class and cheap. I had an opportunity to hook up my new Streets and Trips GPS during the trip. A screenshot is to the right. The green line is the recommended route, via car. The blue line is the route we took by rail. We were moving pretty fast for a while there, about 75-80 MPH.

One interesting thing that I realized is that while there's no WiFi on Amtrak, there's enough stops that you can use NetStumbler to sync email using whatever HotSpot is nearby that stop. I'm not sure why I get such a kick out of that, but I sure do.

This GPS is darned interesting as well. It's cheap - I think it was $60 - but it is wicked accurate. It also speaks NMEA 2.0 which is really easy to speak to over a serial port. I talked to edjez, and I'm going to extend and mess with his C# application for an upcoming article.

Comment on this post [1]
Share on Twitter or Facebook or use the Permalink
March 31, 2005 18:50
It was 60$ (I got one from the store too!)
Now I want an add on to either Streets and trips or a mappoint add-in that will give me turn-by-turn directions.
I can stop paying hertz for a never(always)lost then..