My wife and I got married three times. The first time was ten years ago today. Here's a picture of us on our first date. We were married three months later. 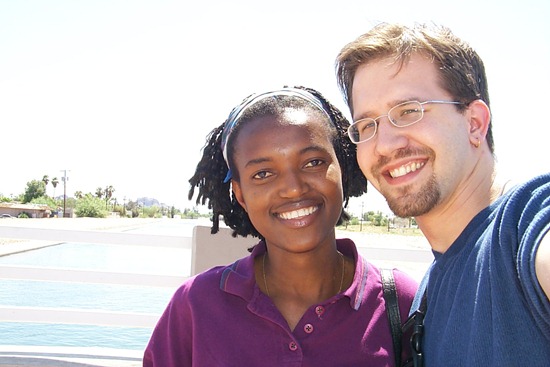 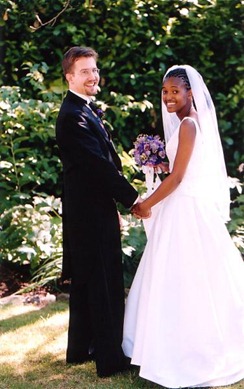 In a small public park in Delaware my wife and I were married. We showed up at the park to meet the judge. He said "where are your witnesses?"

"Witnesses? Um..." I had totally forgotten we needed witnesses.

"You're going to need two folks to sign your certificate and give their details."

"Ok, hang on." I ran over to the jogging path at the park and stopped the first two people that ran by.

"Hi, I know this is weird, but we're getting married and we need two witnesses. Do you have a minute?"

We got married right there under a big tree with a judge and two joggers. Afterwards we went to Friendly's for dinner. It was glorious and wonderful.

Officially married on paper, we moved into together and started planning our White Wedding. Everyone was there.

We worked together in the design of the wedding. I searched the web for "Scottish Interracial Cake Topper" and we had a custom one made for the cake. It had tiny classes and a goatee as well as tiny African cloth in a design that matched Mo's hair wrap and bouquet.

We did the whole thing on the cheap, but it looked like a million bucks. Used dress, MP3s for DJs and burned CDs for party favors. To this day we both pride ourselves on making the old look like new.

A tiny asterisk said "Mo and Scott were married last year in a private civil ceremony." To this day I still get my anniversary dates confused.

We went to Zimbabwe to settle lobola. One day while there I was padding into the bathroom to take a bath and when I opened the door I noticed there was a goat in the tub. I closed the door and reopened it just to check. Yep, goat. Not knowing exactly what was going on, I decided to go back to bed. A few hours later I came out, went to the tub and, no goat.

After a bath I joined the family for breakfast. They made a big deal about giving me some special meat for breakfast. It was the bathtub goat. Unfortunately I said no thanks, and ten years later this faux pas haunts me. Pro tip: Eat what's offered to you. Of course, this was just the first of a thousand cultural goats, I mean, goofs, and I'm sure there will be a thousand more. 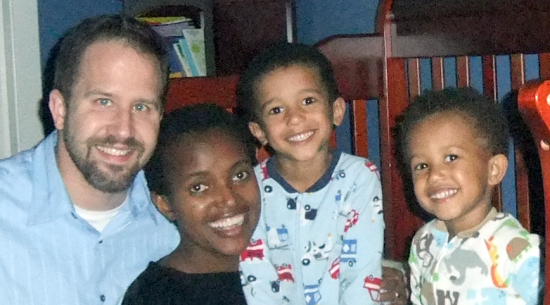 Comment on this post [87]
Share on Twitter or Facebook or use the Permalink
October 25, 2010 10:25
Congrats to both of you. I am proud to call you my friends, and marvel all the time at how perfect you are for each other and for the kids.

Love Actually must be the ultimate film for lovers! <3

Here's to many more Happy Years!

Jon Galloway
October 25, 2010 11:18
Congrats you two! Akumi and I did the whole civil ceremony thing followed by a more traditional wedding later. Our solution to the problem of forgetting which date was which was to only celebrate the official date since that's what would go on any paperwork we would need to fill out. ;)

Krishna
October 25, 2010 13:32
Congratulations to both of you! Wishing I'd be congratulating you for many such decades to come.

José Arturo Molina Aguilar
October 25, 2010 19:27
10 years is a significant milestone, worthy of sincere congrats! Here's hoping you get a chance to celebrate in style!

Chad Chisholm
October 25, 2010 20:17
Congratulations to the nicest guy in Tech. Also, I love the Hanselminute(s?) where Mo interviews you. Here's to hoping you have a few empty episodes coming up where you need her to fill in again.

bashmohandes
October 25, 2010 21:47
Cangratulations! You have a beautiful family and make a handsome couple!

Praba
October 25, 2010 22:38
Congratulations Mo and Scott! My wife and I will be celebrating 9 years of marriage in December.

Jason L
October 25, 2010 22:48
Scott, my sincere congratulations to you and your wife. This was, and is such a nice blog to read. And I have to agree with the other commenters, your kids are absolutely adorable. May you enjoy many more decades together. I love the part of the story about the joggers. I am curious, how did the two of you meet?

jmorris
October 26, 2010 0:35
Congratulation Scott and Mo, a very happy anniversary. Coming Jan it will ours 10th anniversaary too :)

Matt Hempey
October 26, 2010 6:39
congratulations ! There is nothing greater than family.

Mads
October 26, 2010 10:28
Congrats, you two. It always makes me happy to see two people making their lives fit together and putting in the effort to make it last.

Jonathan van de Veen
October 26, 2010 12:13
So I know I'm late to the party, but I just wanted to say I'm a member of the three marriage club too. My first wedding was a civil wedding - traditionally, hindu people do this to celebrate their engagement. My parents were a bit freaked out when I told them on the phone that I was going to get technically married to this girl in Fiji that they had only met the one time.

Like you we always get our dates confused all the time. We just had our 7th aniversary of the civil ceremony (this is the one I always keep) and will be having our 6th anniversaries of our traditional weddings shortly.

As you know, being married three times means you are three times as happy, although my wife likes to joke she will never get married to me again. I always reply that this will be fine by me. Best wishes for your anniversary.

My wife and I got married twice.. basicly the same story except for Zimbabwe. Fun stuff! :)

HOLY COW, zerio to married in 3 months?!?! WOW! Green card, no rock=no nookie, or something else?

Taco Girl
October 27, 2010 3:08
Taco Girl - I'm a little offended by your comment. My wife already had her green card before we got married. We got married because *when you know you know.* I'm more surprised when folks are together for 2+ years and still haven't had a serious discussion about getting married. At some point one stops dating and starts interviewing spouses. We knew, so why wait?

Scott Hanselman
October 27, 2010 6:44
Happy Anniversary. I was just stopping by to say I enjoyed your presentation at #bwe10, and that it was a pleasure to meet you. Many happy years to you and the Mrs.

larzini
October 27, 2010 7:18
I think it's funny that you call it your "white" wedding. My wife and I had a very similar experience, and we use the exact same terminology.

Rudi Grobler
October 27, 2010 19:47
Conventional wisdom says that the longer you "date" the more successful the marriage will be. However, in my anecdotal experience, the 10 couples I know who got married after knowing each other 3 months or less (one couple was married 1 week after they met) are still together an appear to me to be very very happy.

Of the 2 couples I know who waited 7 years to get even engaged (lived together for many of those years) one is divorced and the other seem quite unhappy with each other.

I'm not sure if I'm going to tell my kids these stories though. :)

As an aside, I've enjoyed the couple podcasts that you've done with your wife. I've been married 15 years and it's amazing to find a good woman who groks the tech obsessive.

Where in Delaware? That's where I'm originally from.

ghandlin
October 31, 2010 22:58
Congrats and many more happy returns of many more subsequent decades.

And I am happy to see this post and the interesting story.

Seriously, though theoritically it is possible for a geek or blogger to have a family, it never occurred to me to put a technical person/blogger like you in a family album :-) Might be because I have read more and more of your posts and saw your presentations, code, etc. only on the technical side.

S Krupa Shankar
November 01, 2010 1:17
That was so sweet and a little reminder of what is truly important in life.
Thanks for sharing and here's wishing you both very many years of happiness together.
-Stuart

Stuart Henderson
November 01, 2010 5:35
Awesome story! I hope you continue to have a long and happy family life.

You guys make a wonderful couple (but you already new that).

I was glad to read your story, and made me imagine myself how me and my wife will be after 10 years :)

Wish you a happy life always.

Hasan Bazerbashi
November 02, 2010 18:26
Congratulations! All your tales of the run up to a marriage to someone of a different ethnicity and country are all too familiar, I only married once however,. I'm married to a Jordanian Arab and have many similar tales to tell. One frighteningly familiar detail is the "Scottish" cake decoration, we had one like this as I threatened to turn up dressed in a kilt so "I'd be the person with the shortest skirt there" :-)

Keith Barrow
November 02, 2010 23:03
Scott, you have a beautiful family. It is wonderful to see how much you cherish them. Enjoy them and the life you have built. Congratulations on 10 years and I hope you have decades more.

Susan Mahler
November 02, 2010 23:37
Scott you don't seem to age at all, the picture of you 10 years ago looks like you yesterday... anyways, thank you for sharing your personal life with your readers. It is always better to know a little bit more about you than trying to create some artificial image of you while reading all you technical articles ;). All the best to you and your great family.

Ahmet Sali
November 05, 2010 3:24
Scott, I wish I knew you in real life and could hear this story from you face to face. You seem like a great person who is married to a great person. Your story seems very special. Congrats to you and your wife!! Here's to another 10, and another 10, each better than the previous :-)

Francckkk
November 22, 2010 7:40
Congrats, God bless you and your family. You're a wonderful husband to Mo.