Part 2: Shadows of future versions of Outlook - the researcher speaks

The power of the Internet (connecting the planet) combined with the concepts of subcultures (everyone is interested in something) and blogging (your own syndicated column) never cease to amaze.  My posting 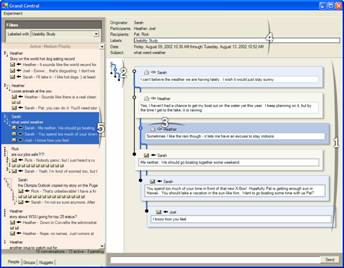 of some Microsoft UI Research around threaded email discussion was Slashdotted last week.  Lots of good discussion ensued, but today a very cool thing happened.  The actual Microsoft Researcher, Gina Venolia, posted in the comments section.  I confirmed that her post is legit.  More importantly she brings up some very good points that I’d like to share.  I’ve split up her comment into sections for me to comment on, but her full text remains unchanged.

I am the person doing the work being discussed.  I think that there are two things of note in the (maybe not too well written) article.  The first is that you can get rid of the headers-and-message-viewer arrangement of most (all?) email programs.  This is probably a good thing because it can turn a lot of clicking on headers into a continuous view.  It's not exactly rocket science or novel - see the thread visualizations in www.dotnet247.com (e.g. http://www.dotnet247.com/247reference/msgs/34/170488.aspx) or www.lugnet.com (e.g. http://news.lugnet.com/cad/dat/parts/?n=4988&t=i&v=a).

True that the article I posted was an internal “puff” piece meant to let people know what’s going on inside Microsoft Research.  It’s fair to say that the author of the piece is not a researcher in this field, and one can’t take an article like this written for a broad audience as a valid abstract of some fairly complex research.

Her first point is one I agree with.  The whole master-detail/headers-message paradigm goes against productive viewing of threaded discussion.  While many sites, like those she mentioned, and many apps (SharpReader being the most notable, IMHO) push the envelope for threading while still maintaining the headers-message multi-paned approach, the concept isn’t exactly splitting-atoms-hard.

The second is that the visualization shows both the sequence of messages and the reply tree at the same time. (Emphasis Scott’s)  No doubt about it, you've been able switch between both of these views in email clients for years.  The sequence is good because you can see what new in a thread that you're coming back to; it's also good because people aren't replying to only the parent messsage, but things that they've read in the other branches.  The reply tree is useful for obvious reasons.  With this visualization you can do both AT THE SAME TIME, which is a good thing.

I’ve always preferred applying additional thought around tough UI problems than the cop-out of a “toggle” between views.   Rather than developing an opinion around the article, I took her very valid advice and read one of her published papers online.  This excerpt from her abstract clearly expresses the intent of this research, which is certainly more than “yet another threaded email client” - again, emphasis mine. 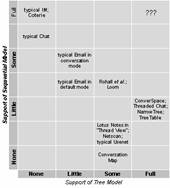 She refers to research by Clark [(1996). Using language. Cambridge University Press.] that
defines utterances in face-to-face conversations as projects, subprojects and digressions, leading to five types of transitions (pair-wise relationships) between utterances: next, push, pop, digress and return.”  Applying these concepts to the question of “What is a conversation” leads them to develop a visualization that expresses these constructs with as peers with full fidelity.

They acknowledge prior research and plot their accomplishments in a grid to show at a glance support for the Tree Model of a conversation versus the Sequential Model.   Refer to the research document for details about each of these different research projects, such as Loom and ConverSpace.  Note, however, that typical Usenet discussions offer some support for the Tree Model, but it’s clear that most interfaces break down around the display of sequentially ordered messages.  It’s usually an either-or situation (a toggle.)

In the comments section, Gina mentions when many Slashdot users mentioned to me – IBM’s ReMail project.  IBM includes improved support for conversation visualization with something called a “ThreadArc.”  This is also an attempt a  “mixed-mode” visualization to express both Sequence and Reply relationships between messages.  ThreadArcs uses arcs to express a reply-to relationship between messages, and dots to represent each message, with those dots sorted left to right (in English) based on a user-defined sort, usually chronological. 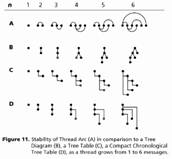 It is their belief that a ThreadArc presents a more stable visualization which allows the user to better see the evolution of a message thread over time.

Gina ends her comment with a reminder to read the research and make your opinions, rather than trign to glean details from an article about the research.  Point well taken.

The combination of these two things is, I believe, what makes this part of Grand Central novel and interesting.  In current email clients and IBM's ReMail, you have to assemble an understanding of what's going on in a thread by looking a message at a time, navigating by clicking on headers, scrolling, etc.  In this view it's all laid out at once, navigable with a scrollbar, shifting the burden from the cognitive to the visual system.  This, I think, is a very good thing.

Instead of basing your opinions on a short article and a screen shot, I suggest reading a little deeper: http://research.microsoft.com/research/pubs/view.aspx?msr_tr_id=MSR-TR-2002-102

Thanks, Gina, for reading my blog and helping spread the word about your research!