Just got back from a nice time at The Standard with a pile of Dev Influencers and such. Saw Miguel, Don and Band on the Runtime, Chris Sells, Keith Pleas, Tim Huckaby, Ingo Rammer, Dan Fernandez (C# PM), Julia, lots of INETA folks, lots of MS folks, and it was all great until Bill Evjen was pushed into the Pool by...who? Can't tell ya.

Well, the original Western Movie Star Jack Palance just walked through the Westin's Lobby.  Someone else spotted Pat Morita, and the bartender at the bar was Devin Elston from MTV's Road Rules #2.  Cool.  L. freakin' A.

Also, came back to the Hotel fully expecting to go to bed and ended up hanging out with Forte and the folks from Code Magazine.  Got to the room and noticed that the Longhorn Developer Center is up!  I was really excited for people like Chris Sells for all the work that they've done.  It must be a thrilling feeling to see all your hard work come together.  The momentum being generated here is great.  The biggest things IMHO are the introductions of 1. declarative programming and 2. vector graphics (arguably 1a.) as first class citizens in Longhorn.  I'll have an article up on .NET Developer's Journal later this week about Avalon and my thoughts on these issues.  I'll post it when it's up. 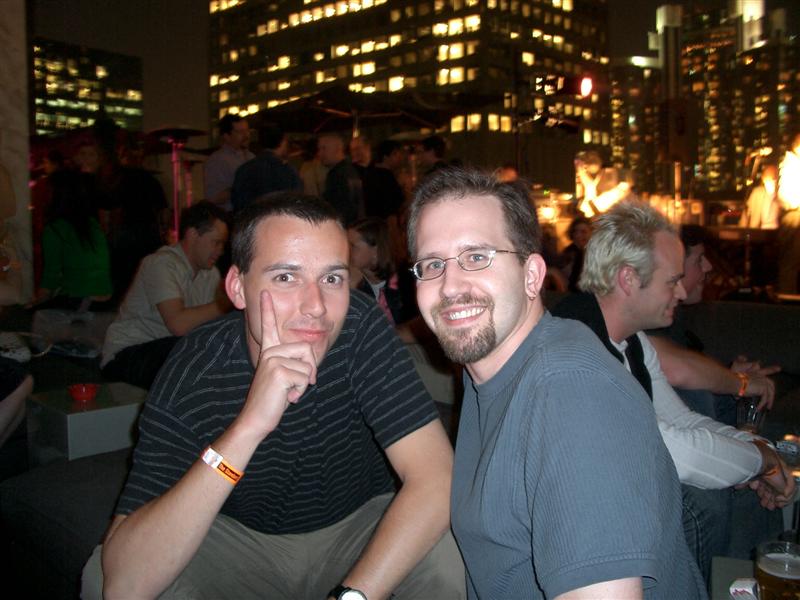 Here's me and Ingo, with Ingo looking wise, and me looking psycho. 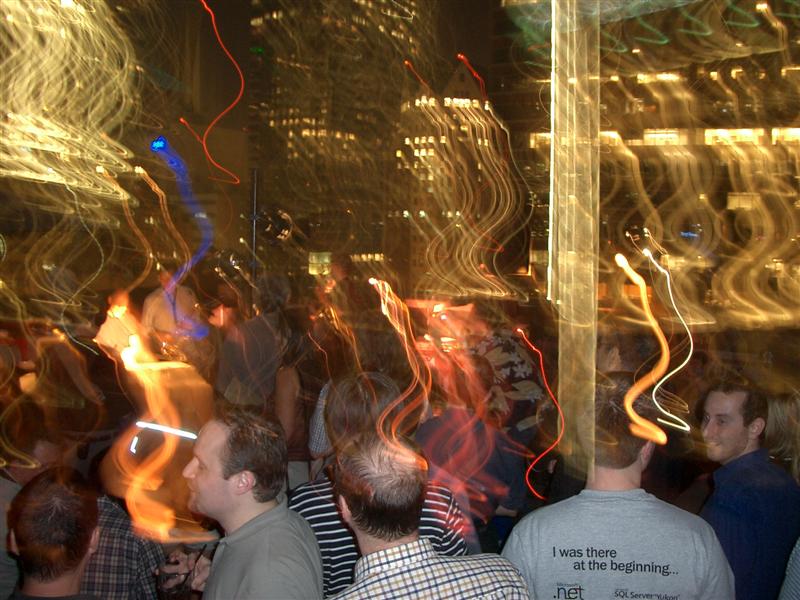 Here's what the party looking like towards the end.

Here's Bill falling (being pushed) into the Pool.

Comment on this post [2]
Share on Twitter or Facebook or use the Permalink
October 28, 2003 14:53
Having repeatedly pressed the refresh button waiting for Scott's plain text updates, I am picking this as the place to get the latest information for those of us unable to attend.
Does anyone know where there is an example of the Aero interface, and or some videos of longhorn working with the slate theme?
I have seen the winsupersite videos that are up as of now, but I am looking for a video of the aero UI, preferrably one produced by MS.
Thanks, and to Scott, truly great work for the keynote -- from other comments I know that I was not the only one waiting for your updates.

theCoach
October 28, 2003 18:44
There probably won't be a lot of MS produced ones for now, but I can ask a few people. Did you see the Amazon.com Aero app video on this page? It's farther down on the page.