Getting reading for my talk at PDC 2008. 75 minutes just isn't enough time to cover everything. I hope the talk doesn't suck. Here's what my home office looks like as I'm getting my demos ready. 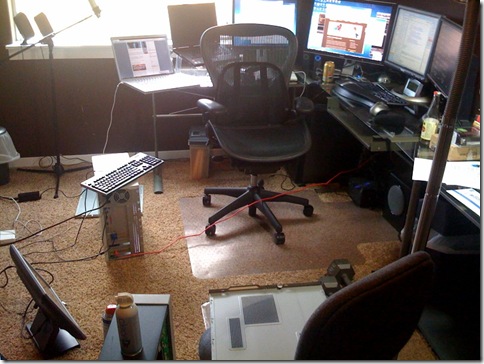 I was reminiscing by looking through the nine pages of my blog's PDC category just now. It was interesting to look at what I said about PDC 2003 in conclusion. (Yikes, 5 years ago?)

What I remember most about PDC 2003 was that I used my Blackberry (at the time) to Live Blog the whole keynote. Remember this is five years ago, before wireless was everywhere and a bit before keynote live blogging was really common. Hurt my fingers and hands a LOT as I recall.

Here's one of the posts I did from my Blackberry at the time:

Comment on this post [16]
Share on Twitter or Facebook or use the Permalink
October 18, 2008 0:01
*That's* what I call "Home Office" :) sweet configuration you got there.
I wonder what's the WAF for the mess though (cables, open cases, etc.) I wonder it's still in tact with the little people running around at your place ;)


I wish I could go to the PDC. Being an indie consultant sucks cuz there's no-one to pay for flight and tickets ...

Good luck on your talks Scott! I am looking forward to seeing them.

Glenn Block
October 18, 2008 0:43
Is that a Herman Miller Aeron chair you have there? Sweet! Wish my wife would let me get one of those for my office ;)

Shawn B.
October 18, 2008 3:42
My goal in life is to one day witness a ScottHa presentation live and breathe the same re-circulated, conference room air as he.

Vajarov - :) My dad and brother are both Portland Firemen, but I shouldn't show them this room. One interesting point of note, however, is that when I built the house I put the whole home office on its own 20A circuit, separate from the rest of the house. This room can't "take out" other parts of the house or vice-versa. Also, the whole room is on UPS.

Shawn B - You can get them on ebay cheap and deduct them. If you have a bad back, you can get the doctor to get you a prescription or flex plan it.

I love how people don't expect you to not use Apple stuff since you are so Microsoft but I am a Microsoft developer and I absolutely love my MacBook Pro and you would have to pry my IPhone from my dead cold hands! ;)

Anyways the reason for my post, what chair is that in your office? I have been chair searching and haven't really found an affordable ergonomic chair that is comfortable. Most of them are way up there in price, any recommendations?

BTW love the color choices in your new office, I remember you posting about it a while back and it looks great!