Quicksilver for Windows - Eh...soon...Colibri is close 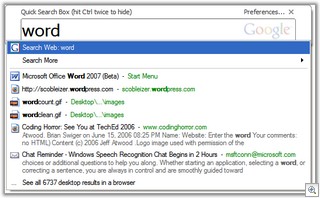 I am so very much all about SlickRun, but lately I've been branching out.

I've been using the "Ctrl-Ctrl" hotkey on Google Desktop more and more. There's a configuration option in Google Desktop that lets you indicate that you're more interested in launching programs than finding stuff. This turns Google Desktop into a fantastic program launcher, particularly for those not-used-so-often-have-to-search-for-programs that one tends to ding into the Start Menu looking for. Since I've incorporated GDS into my productively cycle as an augmentation to SlickRun I've not needed the start menu.

A while back, after I got my Mac, I (mentally) declared QuickSilver to be the greatest program launcher ever. Anyone who gets QuickSilver done right on Windows, they will have a license to print money. 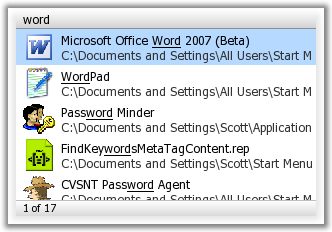 Colibri is a pretty decent start at a QuickSilver for Windows. Just like QuickSilver, you hit Ctrl-Space and start typing.

It's about 20% of the way to being QuickSilver, but it's a great start. I hope the author keeps development up and moves it forward.

Other apps to try out in the same vein are, of course, SlickRun, but also AppRocket, ActiveWords, and Launchy. I talked about these in my Hanselminutes Podcast #15 on Replacing Start|Run.

Andrej Gaevskij
June 16, 2006 14:33
1. i find your views insightful and you seem to "find" useful ways of doing stuff. this "quicksilver for windows" is a biggie. please continue on this subject
2. i've evaluated most of these apps and decided on Launchy....it does the one thing i wanted the most(replacement for start) the best(fast/low memory/no pauses/no crashes/configurable/recent development)
3. i did NOT know about that google desktop feature...COOOL.
4. i think if slickrun and launchy got together they'd have a flat-out winner. (maybe you can get the developers together :)

Alex
June 16, 2006 16:45
I have been using a blend of AppRocket/GDS for a while Scott. I think GDS rocks on searching (havn't tried it as a launcher), and the thing I like about AppRocket is the intelligent search engine. It learns that when I type SQL I want SQL Server Management Studio, even though I have tons of files with sql in the title or meta on my pc.

You're a clever man, a developer and someone that loads of people respect when it comes to choice of software "tools".

Have you never thought about creating the QuickSilver for Windows app that you're looking for? If it turns out to be "a licence to print money" then all the better, but I'm sure you'd release it as freeware ;-)

Keep up the excellent blog posts.

Kevin Dente
June 16, 2006 21:35
This is very cool and I blogged about your posting on my site. I think all applications should have some type of behavior like this. I have found over the years when applications provide typing based shortcuts I get hooked on them very fast. I even remarked how much I love the searching in FireFox with the forward slash.

Bob Balfe
June 17, 2006 0:31
Colibri Rocks! I had tried Slick run after I heard the hansel minute show where you talked about it, it was cool and stuff but it just didn't have that "feel good factor" about it... Launchy was cool to look at but you just couldn't make it run things that were not there in your start menu. For example, all my life I've been used to typing [windowkey]+r(for run)+winword to open word and powerpnt to open powerpoint and this is where Launcy just wouldn't work.

The coolest thing about Colibri is that the daam thing is pretty intelligent @ learning - type a thing a couple of times and it literally "understands" what you mean. Slick run was cool and all... but you still had to teach it like a robot - by feeding magic words into it. Colibri just rocks! Thanks you SO MUCH for sharing this stuff!! This is the thing that's going to replace my start button - unless, of course, are thinking of writting quick silver :)

rajiv popat
June 19, 2006 9:02
Does anyone know if the keyboard shortcut to bring up Colibri can be changed? I like to use CTRL+SPACE for Intellisense in VS.NET. Thanks!

flipdoubt
June 25, 2006 3:14
I have looked at these various apps, and I don't quite understand why the basic concept of just letting the user name the computing event the way we do! That said, I think that QS does stuff that we hope to be doing. I also don't see where any of these guys have built a tablet agent or other agents like we have. Maybe I am missing something! Who knows...

Buzz Bruggeman
July 05, 2006 18:04
I use ActiveWords - and like it. However, it would be nice if ActiveWords was smart enough to work with files, folders, etc. without having to explicit create an ActiveWord for everything that you want to do ...
adf471587879rzq