Retrogaming on original consoles in HDMI on a budget 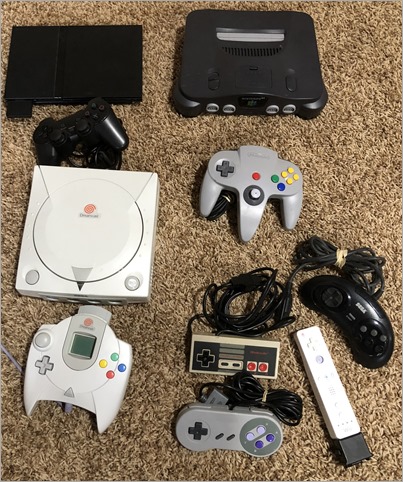 My sons (10 and 12) and I have been enjoying Retrogaming as a hobby of late. Sure there's a lot of talk of 4k 60fps this and that, but there's amazing stories in classing video games. From The Legend of Zelda (all of them) to Ico and Shadow of the Colossus, we are enjoying playing games across every platform. Over the years we've assembled quite the collection of consoles, most purchased at thrift stores.

Initially I started out as a purist, wanting to play each game on the original console unmodified. I'm not a fan of emulators for a number of reasons. I don't particularly like the idea of illegal ROM come up and I'd like to support the original game creators. Additionally, if I can support a small business by purchasing original game cartridges or CDs, I prefer to do that as well. However, the kids and I have come up with somewhat of a balance in our console selection.

For example, we enjoy the Hyperkin Retron 5 in that it lets us play NES, Famicom, SNES, Super Famicom, Genesis, Mega Drive, Game Boy, Game Boy Color, & Game Boy over 5 category ports. with one additional adapter, it adds Game Gear, Master System, and Master System Cards. It uses emulators at its heart, but it requires the use of the original game cartridges. However, the Hyperkin supports all the original controllers - many of which we've found at our local thrift store - which strikes a nice balance between the old and the new. Best of all, it uses HDMI as its output plug which makes it super easy to hook up to our TV.

The prevalence of HDMI as THE standard for getting stuff onto our Living Room TV has caused me to dig into finding HDMI solutions for as many of my systems as possible. Certainly you CAN use a Composite Video Adapter to HDMI to go from the classic Yellow/White/Red connectors to HDMI but prepare for disappointment. By the time it gets to your 4k flat panel it's gonna be muddy and gross. These aren't upscalers. They can't clean an analog signal. More on that in a moment because there are LAYERS to these solutions.

Some are simple, and I recommend these (cheap products, but they work great) adapters:

If you're ever in or around Portland/Beaverton, Oregon, I highly recommend you stop by Retro Game Trader. Their selection and quality is truly unmatched. One of THE great retro game stores on the west coast of the US. 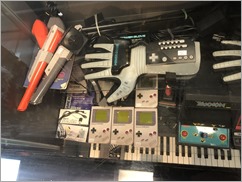 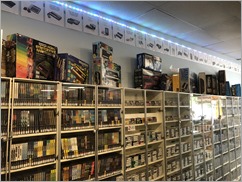 For legal retrogames on a budget, I also enjoy the new "mini consoles" you've likely heard a lot about, all of which support HDMI output natively! 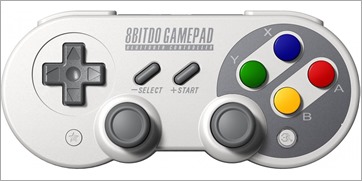 In the vein of retrogaming, but not directly related, I wanted to give a shootout to EVERYTHING that the 8BitDo company does. I have three of their controllers and they are amazing. They get constant firmware updates, and particularly the 8Bitdo SF30 Pro Controller is amazing as it works on Windows, Mac, Android, and Nintendo Switch. It pairs perfectly with the Switch, I use it on the road with my laptop as an "Xbox" style controller and it always Just Works. Amazing product.

If you want the inverse - the ability to use your favorite controllers with your Windows, Mac, or Raspberry Pi, check out their Wireless Adapter. You'll be able to pair all your controllers and use them on your PC - Xbox One S/X Bluetooth controller, PS4, PS3, Wii Mote, Wii U Pro wirelessly on Nintendo Switch with DS4 Motion and Rumble features! NOTE: I am NOT affiliated with 8BitDo at all, I just love their products.

We are having a ton of fun doing this. You'll always be on the lookout for old and classic games at swap meets, garage sales, and friends' houses. There's RetroGaming conventions and Arcades (like Ground Kontrol in Portland) and an ever-growing group of new friends and enthusiasts.

This post uses Amazon Referral Links and I'll use the few dollars I get from YOU uses them to buy retro games for the kids! Also, go subscribe to the Hanselminutes Podcast today! We're on iTunes, Spotify, Google Play, and even Twitter! Check out the episode where Matt Phillips from Tanglewood Games uses a 1995 PC to great a NEW Sega Megadrive/Genesis game in 2018!

Sponsor: Announcing Raygun APM! Now you can monitor your entire application stack, with your whole team, all in one place. Learn more!

Comment on this post [2]
Share on Twitter or Facebook or use the Permalink
April 16, 2018 1:44
The Framemeister (href=http://retrogaming.hazard-city.de/framemeister.html) is the ultimate tool in getting old games to look good on modern TVs. Obviously expensive. Take a look at the "My Life in Gaming" YouTube channel for the kinds of results you can get https://www.youtube.com/channel/UCpvtp7mH0Cdq8FQUxcjDq0Q

Chad
April 19, 2018 1:40
I remember as a kid visiting you in Beaverton. Your room was attached to your parents garage. I thought it was the coolest thing. I remember you being in to electronics and games and coding since you were very young! Altered Beast we played!