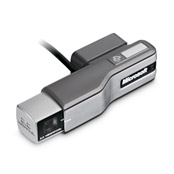 Yes, it's got a silly name. Not the LifeCam part, that's pretty cool actually. The VX-6000 part I could do without.

It clips to the top of your flat panel or laptop. The left side has a retractable mechanism that brings the lens in and out. The Microsoft logo lights up when the camera is on - a nice subtle indicator that you're rolling.

It's a 2MP camera, so that means 1600x1190 max actual pixels. It'll interpolate to 7.6MP but don't be fooled, it's all software. That said, it takes a perfectly fine picture of a whiteboard, so I leave it clipped to my laptop all the time in order to document meetings.

The camera has a decent enough microphone built in, a smidge better than the one built into my laptop. As an alternative, there's a LifeChat ZX-6000 that's the same hardware as the Xbox Wireless Communicator. I just picked up a Xbox Wireless Receiver for Windows for $19 that let's me use the Xbox one to chat on the Windows box. Works fantastic as a team and costs me less.

This is a fantastic little camera and I'm happy with the purchase. I particularly like that is has a wide(r) view aspect so you can see more, rather than the fish-eye kind of lense that so many webcams have these days.

Ian
March 21, 2007 5:45
You should try mailing the pictures of the whiteboards (and other documents, including business cards) to the free service ScanR (www.scanr.com). You mail them the photo, they do OCR on it, and send it back to you as a PDF or vCard. It's pretty awesome.

Josh Bancroft
March 21, 2007 10:46
scanr don't seem to OCR anything but business cards. Nice service otherwise, if you can't be bothered to adjust contrast and crop.

Rik Hemsley
March 21, 2007 15:56
The LifeChat wireless headset hardware seems to be reviewed as having poor sound quality -- anyone here have experience w/ it?

CP
March 21, 2007 17:28
Ian - I didn't seem them at the Employee Store
CP - I haven't personally experienced poor sound quality...are they saying it's tinny or something?

Scott Hanselman
March 28, 2007 16:36
That's good to know - I believe the Amazon reviews slagged the unit as having poor quality, but I'll probably get one to check it out anyway...

CP
April 03, 2007 7:02
While I haven't experienced poor sound quality with the speaker on the wireless headset, I have had poor luck with the microphone. Seems there are some usb or wireless incompatibilities when I have my wireless mouse plugged in (MS Natural Wireless Laser 6000). The recorded audio from the microphone is incoherent at best. Reboot without the mouse and the microphone works great. I've tried this with both the LifeChat ZX-6000 and the Xbox setup. Same results.

Interestingly, the LifeChat ZX-6000 receiver is the Xbox 360 Wireless Receiver for Windows, only in black. The LifeChat software makes use of the new button mapping on the headset and gives you options to mute the music when getting or making a call via Live Messenger.