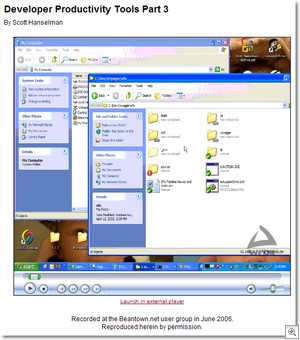 The complete presentation was around 1 hour 45 minutes, so for online, Jim has split it into 4 segments. This week's segment is #3 and is available now and is about 30 minutes long. If you watch it in your browser, I recommend you double click on Windows Media Player to make the video go full screen. You can also download the full video.

The remaining segment for next week will cover roughly:

Comment on this post [4]
Share on Twitter or Facebook or use the Permalink
July 28, 2006 0:47
It rocks! I would be pleased if you published your old video presentation (TechEd, etc... ) I can't find them anywhere
by the way, do you know a trick to tell windows command line (aka cmd) that a batch file is saved with unicode encoding not OEM. I did not find any solution other than unsing user32.dll api CharToOem to reencode the batch file!

Or do I have tomatoes on my eyes??