I realize that many (most) of you are not on Twitter. I am, however, on Twitter and I find it to be a joy. I have had a few complaints (just a few) because I tend to be random on Twitter. If you want only a stream of technical .NET resources, then don't follow me. However, if you want to follow the Whole Person, then please, join the fun.

The most wonderful part of Twitter is just letting it flow over you. I tend to discover lots of interesting and cool stuff. So much so that I've started "Favorite-ing" things I want to save for later. That means clicking the little Star icon. You can access any Twitter user's favorites by putting /favorites at the end of their URL, like http://twitter.com/shanselman/favorites. There are 3rd parties like FavStar that mine this information, both favorites (stars) and retweets (RTs) and then sort by popularity. You can see my most "popular" tweets here: http://favstar.fm/users/shanselman. These tend of be ones that folks want to save for later themselves.

For the people that aren't on Twitter (or aren't on it as much as I am) I thought I'd do a post each week or so with a roundup of the most awesome links I've come upon that week on Twitter. One stop shopping for awesome. I'll also add some commentary about why it's awesome. These aren't all development centric, but they were interesting to me.

shanselman: "I'm on Google+ on a 'Hangout' right now. It's basically ChatRoulette for nerds with invites. And pants."

I was playing with Google+ today and this was my first impression. I tweeted it and it was retweeted a few hundred times and was eventually a "Top Tweet" when you searched for "Google Plus" for several hours, which I thought was hilarious. You never know what throwaway tweet will be seen by thousands. I was happy so I favorite it.

Twitter is a haven for sarcasm and snark. Love it.

XKCD, one of the web's most brilliant and insightful comics had this to say about Google Plus. I guess they just wanted something that wasn't Facebook. Found this via shawncdean.

clipperhouse Only just read this, stats on Fog Creek internships vs applicants: http://t.co/fCr3BH9

Some really interesting charts and graphs talking in great detail about how FogCreek software finds their new recruits, where they've had success and where they just haven't. 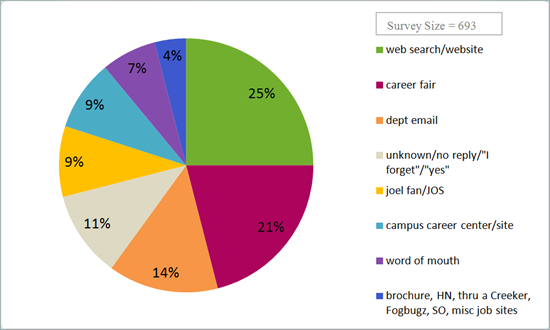 There are just hundreds of great free fonts here for you to use on your website. 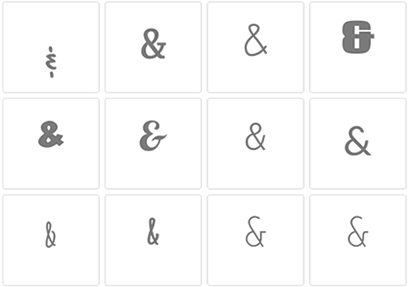 I found this on Facebook and tweeted it. As they say, "it's funny because it's true."

It was retweeted almost 900 times and the image on just my Twitpic of it has been seen over 33,000 times. Amazing. Someone named "manu" made it. If you know their site, let me know and I'll link to them! 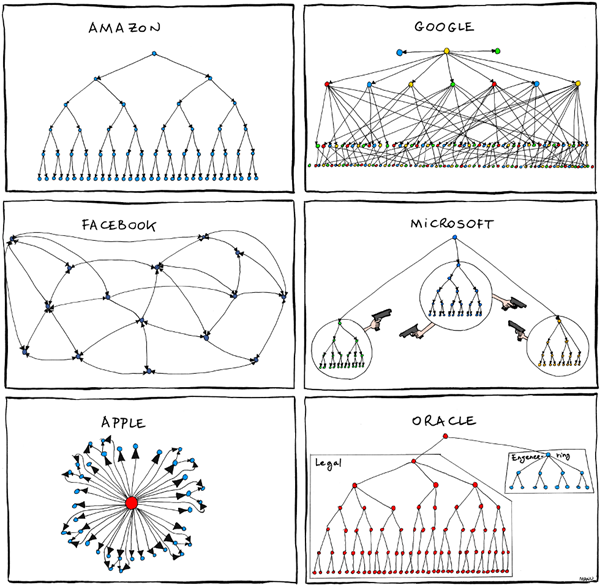 subdigital: Ruby is slow, but at least it's open

Ben Scheirman said this and it resonated with me.  I'd like to help create something that is fast (ASP.NET) and open (???).

Please, people, comment to source control BEFORE you save yourself from a fire! ;)

For more details on Twitter and my tips and tricks, I hope you'll enjoy these...

Anon
July 01, 2011 13:44
I have to say, your randomness of Twitter was one of my favorite things about it. The links and insight were nice, but the constant stream of consciousness was great.

Robert Corvus
July 01, 2011 21:15
I love the org charts. Like you said, funny because it's true. Would be fun to create one for a few other companies like Corillian, Intel, and Nike.

This blog post was quite amazing and useful (as are your other blog posts! Am a huge fan and do follow you on twitter as well under a different alias). One question I wish to know about twitter but dont know whom to ask. How does one broadcast tweets? I mean say I want to write to about 10 people or all the people on a list (but who aren't following me) at the same time? Do you know of any way to do that? It would be great if we could "post" to a twitter list, say a WPF list, or something like that.

Keep up the good work!

July 12, 2011 15:08
Scott, we totally agree that Twitter is a joy and have an account which we use as a tool to answer questions and network with PC users. Mamta, to answer your question, only people who are following you will have your tweets show up in their twitter feed. While there isn’t a way to send tweets directly to a specific list yet, you can use a hashtag symbol in front of a targeted, key word (#word) to direct your tweets to people interested in this topic and following that hashtag. Does that answer your question?