Just in case you missed it, .NET is all open source now and .NET Core is a free, open source, cross-platform framework that you can download and start with in <10 minutes. You can get it on Mac, Windows, and a half-dozen Unixes at http://dot.net. Take that along with the free, cross-platform Visual Studio Code and you'll be writing C# and F# all over the place.

Ok, that said, there's two ways to deploy a .NET Core application. There's FDD and SCD. Since TLAs (three letter acronyms) are stupid, that's Framework-dependent and Self-contained. When .NET Core is installed it ends up in C:\program files\dotnet on Windows, for example. In the "Shared" folder there's a bunch of .NET stuff that is, well, shared. There may be multiple folders, as you can see in my folder below. You can have many and multiple installs of .NET Core.

When you're installing your app and its dependencies BUT NOT .NET Core itself, you're dependent on .NET Core already being on the target machine. That's fine for Web Apps or systems with lots of apps, but what if I want to write an app and give it to you as zip or on a USB key and and I just want it to work. I'll include .NET Core as well so the whole thing is a Self Contained Deployment.

It will make my "Hello World" application larger than if I was using an existing system-wide install, but I know it'll Just Work because it'll be totally self-contained. 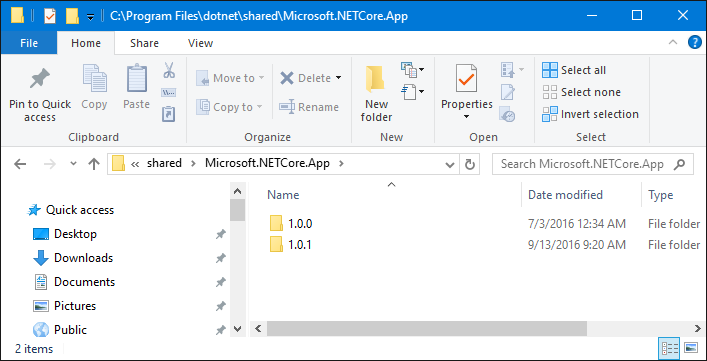 If I deploy my app along with .NET Core it's important to remember that I'll be responsible for servicing .NET Core and keeping it up to date. I also need to decide on my target platforms ahead of time. If I want it to run on Windows, Mac, and Linux AND just work, I'll need to include those target platforms and build deployment packages for them. This all makes mostly intuitive sense but it's good to know.

My app is a .NETCore.App, but it's not going to use the .NET Core platform that's installed. It'll use a local version so I'll remove "type="platform"" from this dependency.

Next I'll make a runtimes section to specify which ones I want to target. There's a list of ALL the Runtime IDs here.

After running "dotnet restore" you'll want to build for each of these like this:

And then publish release versions after you've tested, etc.

Once this is done, I've got my app self-contained in n folders, ready to deploy to whatever systems I want. 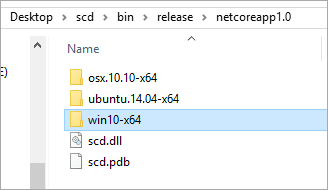 You can see in the Win10 folder there's my "MYAPPLICATION.exe" (mine is called scd.exe) that can be run, rather than running things like developers do with "dotnet run." 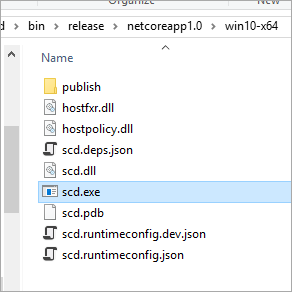 There's lots of good documentation about how you can tune and define exactly what gets deployed with your self contained application over at the .NET Core Docs. You can do considerable trimming to .NET Core, and there's talk of that becoming more and more automated in the future, possibly down to the method level.

Sponsor: Big thanks to Redgate for sponsoring the feed this week. Discover the world’s most trusted SQL Server comparison tool. Enjoy a free trial of SQL Compare, the industry standard for comparing and deploying SQL Server schemas.

Now I got an documentation about the framework IDs too thx alot:)

Btw: Your link to the runtime IDs is broken, there you have an extra ' character at the end :).

Sascha Bakonczak
September 18, 2016 11:40
hey Shawn, I did not get when you said .exe isn't your app as a .exe. I understood scd.exe as compiled version of my application only. but got confused with ur comment.

Rui Carmo
September 18, 2016 12:44
@Rui - the Runtime IDs link is 404 because there's an extra single quote at the end. Here's the working link: https://docs.microsoft.com/en-us/dotnet/articles/core/rid-catalog

Tony Edgecombe
September 18, 2016 17:53
So if I run the publish commands, what would someone on ubuntu or mac need to do to run the application if I gave them those files on a thumbdrive?

Michael Paterson
September 18, 2016 21:19
@Tony, Winforms and WPF will require a much fuller version of .Net than is present in Core.

However, I wouldn't mind a stripped down version of Winforms, windowing with basic controls could take you a long way, IMO.

Fallon
September 18, 2016 21:22
This was a very useful tutorial. You're right that there's a lot to read through in terms of documentation but it's a bit fragmented and I couldn't see anything on how to do what's been done here.

I spent a couple of nights recently playing around with the binary installations trying to get a deeper understanding of how it all hangs together and I'll be honest I'm still a bit lost.

Previously with dnvm I could run dnvm list this would give me all the runtimes installed and I could easily switch with dnvm use. But now it isn't clear (to me at least) how you switch between installations or indeed what the dotnet binary actually is. For example, when I run the following:

I get the following path in my terminal:
/usr/local/share/dotnet/dotnet

So this is the current version of dotnet installed on my Mac which if I run dotnet --version gives me 1.0.0-preview2-003131. I'd recently upgraded from 1.0.0-preview1-002702 so where is that? I can see two installations in the following directories:


And each of these directories contains the following binaries which upon inspection look exactly the same as the binary returned by which dotnet:


To further compound my confusion when I execute either of the above binaries I get:


I get this when I just execute dotnet directly without any switches and when I append the --version suffix I get a blank line in my console. I (perhaps crudely) expected it to act the same as when I run the typical dotnet command and have no idea why the behaviour is different. I thought it might be something to do with a macOS installation but I fired up a couple of Linux VMs and had the same result.

Matthew Blott
September 18, 2016 22:32
Matthew - google hanselman global.json Dnvm and I have a blog post on that

Scott Hanselman
September 19, 2016 0:05
One thing to consider with a self contained app is the target OS still needs the .NET prerequisites configured. On Ubuntu it means updating a few libraries using apt-get or curl in some cases and for OSX (if you are using the network)it means updating SSL.

The self contained model is very cool but after working for the past year to ship an app using it given the caveats above I am not sure it is really better for my users.

I can't believe I missed that - that's a lot clearer! Thanks :-)

Re: "If I deploy my app along with .NET Core it's important to remember that I'll be responsible for servicing .NET Core and keeping it up to date"

What if I like the packaging model, but just want to use the same "curated" dependencies/patches that MS has spent time validating for FDD? Couldn't there be a simple tool for updating tested combinations of framework dependencies/patches? "Simple" not meant passive-aggressively...perhaps not so simple?

I was wondering whether there is a good official document explaining each section of the project.json file. It is clear to me now what the type="platform" is used for but what about other keys?

There are a lot of blog posts that are trying to explain these configuration keys but they either are out dated or didn't explain why.

Will self-contained replace ClickOnce apps? If not, how would we use this in conjunction with ClickOnce? Will we use Certs?

How would we "servic[e] .NET Core and [keep] it up to date"? What about dependencies like SQL or local DB?

Ric Johnson
September 19, 2016 23:57
I would love to see some image encoder/decoder functionality added into .NET Core so that we can do cross-platform image processing and manipulation, even if just at the command line for now. Something along the lines of the "BitmapSource" class in WPF, or WIC in general. Is this being looked at?

LKeene
September 20, 2016 12:38
It would be interesting to see if any of Xamarin's linking tech could reduce the size of the SCDs.

Also I don't quite understand why did you not implement the scenario we have currently in full .Net - an exe bootstapper with app code. It could does the same thing as 'dotnet run', but wouldn't depend on external cli tools.

Ali
September 26, 2016 17:08
The number of router producers using the IP 192.168.0.1 as the default IP address for their routers is not really modest. This IP address belongs to factory options, but it can be updated, based on a user preferences. The default IP can easily be modified by using a router settings page. Generally, the IP is there to provide a distinctive identity for devices in the network system. This particular numeric Identity consists of 4 partitions of numerals, separated by dots. A particular IP range in which this IP sits is usually the one from 192.168.0.0 to 192.168.255.255.

Marie Wada
September 27, 2016 12:28
Looks to me a lot like what I used to do back in the days when I would write a C program, compile it and link it on whatever target platform, then distribute the "self-contained" exe. Looks like we've been through the full circle of .NET framework rediscovering the virtues of good old-fashioned linker... Just saying...

Memet Olsen
September 30, 2016 7:15
Is there a way we can compile for other Linux distro's/versions not listed currently?

I know with Mono (and other languages) if you can get a package for your distro and/or get Mono running on that distro from source you can create a static bundle right now for that target. Bit worried about this being too centralised and lagging behind current Linux changes.

Applications compiled with for example c and pascal do not have all the security patches administration and responsibility which comes with .NET. I understand completely why MS does not want this too.

For this reason I can understand why a system administrator can refuse self contained Core apps.

For cross platform mobile and windows apps I switched back to Delphi Firemonkey (there is also a C++ builder Firemonkey) so I can compile directly without .core/mono (xamarin). Not only for security reasons btw.

When I try the above, it doesn't seem to generate any "EXE"s:

Tried on Mac and Windows. Would appreciate a pointer in the right direction ?

Ameer Deen
October 02, 2016 15:24
I know with Mono (and other languages) if you can get a package for your distro and/or get Mono running on that distro from source you can create a static bundle right now for that target. Bit worried about this being too centralised and lagging behind current Linux changes.

skrotpræmie
October 02, 2016 23:17
Is there a way we can compile for other </script> Linux versions not currently listed?