Shadows of future versions of Outlook?

An interesting story out of Microsoft Research.  From an internal alias, but OK'ed for public consumption:

When Words Collide:  Organizing Your E-mail Inbox (feel free to share this message with your customers!)

The daily flood of e-mail messages is like a baby's cry — insistent but mysterious. You genuinely want to understand the meaning, but you can't always grasp the language.

Gina Venolia, a user interface engineer with Microsoft Research, wants to make it easy for you to understand even the most complex conversations. She's designed an e-mail interface that focuses on conversations instead of messages, putting what's most important about communication first - the people.

"I like slogans," says Venolia. "And for quite a while my slogan was, "It's about people!" Venolia says that she thought about this a lot after producing a batch of applications that were supposed to be about communication, but just created more layers of intricacy for the user to decipher.

Then, about five years ago she attended an all-day meeting. Doodling on a paper napkin, she came up with a list of all the different ways she could send information digitally: e-mail, attached documents, instant messages, shared files, FTP, Web sites, the telephone. "I ended up with over a dozen things. And each one of them had its own tool and its own quirks. I thought, 'something is wrong here'," said Venolia.

To find some answers, she started observing and surveying people to learn about their e-mail habits. What emerged was some organizing principles about how to communicate digitally. She discovered that people focus on conversations instead of a single message. She also found out that digital conversations aren't as ephemeral as spoken conversations. People often want to preserve them or turn them into action items.

As a result, she designed an innovative interface, code-named Grand Central, which organizes messages into conversations, and allows people to easily store and retrieve conversations.

Focus On Conversations
Current e-mail tools are like looking at a conversation with a magnifying glass. It's easy to see the details but difficult to get an overall picture. In Venolia's interface you view conversations as a whole instead of as individual messages. The initial message is shown at the top, and the most recent reply at the bottom, followed by the text box to input your response, similar to a chat format: 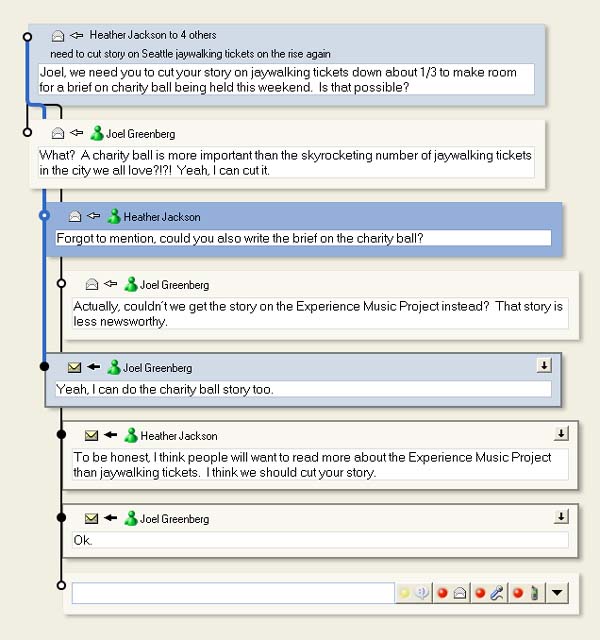 She found out that about half the time you use e-mail, it's a no-brainer. Someone sends you a message, you reply, they reply back, and it's done. But if there's nine people on the 'to' line, and each one is throwing his or her hat into the conversational ring -- making decisions, offering suggestions, providing links to back up their story, or jumping in to IM you -- it becomes harder to understand who is saying what to whom. In Venolia's interface you can see what a message is a reply to by looking at the heavy black lines that join the messages

Finding an email conversation weeks or months after you've finished it can be maddening. You might look for it under a person's name, but maybe that person isn't someone who you do business with regularly, so you don't quite remember the name. Or you could look for it by date - but if it was months ago, that could be a problem, especially if you aren't sure whether it was March or May or June. There are multiple ways to remember facts and information. So why shouldn't you be able to store and retrieve it in multiple ways? Venolia's interface allows you find conversations by date, person and other attributes or to label your conversations using keywords of your own.

In a conversation where a message gets multiple replies, a simple chronological view of the messages isn't enough to convey the relationships between the replies. For example, if a message gets two replies, and each of those two got a single reply, your conversation would now have branches. Grand Central handles these relationships by showing lines along the left edges of the messages. You can see at a glance how many branches a conversation has. To help you follow just one person's views - say your boss or the company guru -- Grand Central uses colored lines to connect replies from the same person.

It doesn't stop here. Venolia has also designed the user interface to give you some metrics about your conversations - you can find out at-a-glance just who you communicate with the most, and whether you are the originator, recipient or a participant. You can also see a complete list of the attachments, URLS, and images that are found in all your messages, in case you don't want to hunt through past e-mails to find that one document or Web site reference that you want.

Grand Central is designed to help people keep track of conversations as they're happening, easily integrate different digital communication methods, turn a conversation into a follow-up task, and find and reference past conversations and the digital information that comes with them.

Her innovative concepts show future promise for a medium that has become our number one communication tool. "My goal is to make things better for people who use e-mail, which is just about everyone. E-mail overload is everywhere. People can spend over an hour and a half on e-mail a day. And it's not just knowledge workers — it's everyone. Grand Central is just a picture of how it could be made easier in the future," said Venolia.

I've been seeing that a lot lately, a company will make an annoucement about a technology and suddenly it will pop up in the MS related blogs and PRs as something MS is working on.

Mutt, Mozilla Mail, Opera, and others have been providing intelligent threading for YEARS.

Here is one such algorithm that dates back to 1997:
http://www.jwz.org/doc/threading.html

JL
December 22, 2003 21:09
How is this different than what programs like Opera, Mozilla, and Apple Mail are doing now? It seems to me that if I turn on threaded view for emails in Opera, and use the quickreply field to answer emails I get all the advantages of the "new" interface.

An opera user
December 22, 2003 21:36
Seems to me that this is a "refined" threading view. You know how standard email threading can't figure out what's a reply and what's quoted original text? That's still a problem with all email programs. Often they get confused and think some random reply started a new thread, especially if someone changed the Subject but continued the thread. If there were some fuzzy logic to fix that, that'd be cool.

Franklin
December 22, 2003 23:04
Yes, this sounds almost exactly like the threading that has been in existence for many years in many email clients. Although the idea sounds neat, most of the article is trying to say that Microsoft is 'innovating' in areas that have existed for a very long time.

While they seem to be adding to the threading capabilities, and adding some nice features they are, I really don't think the author of this article gave the topic justice by talking most of the time about threading.

To Franklin:
most modern MUAs add several headers to the message when you reply to it, for threading capability. The only time my email client (evolution) ever 'breaks' this threading, is when someone is using an MUA that doesn't have that capability. And as for what's quoted and what's original text... that's what the > is for. If proper bottom-posting and quoting techniques are practiced, as well as more widespread support for the headers that help threading out appears, the problems you brought up with the current threading system will go away.

Evolution tracks those, and displays them fine. Someone could click reply on a post, and change EVERYTHING about the message (subject, body, etc) and evolution would still thread it properly.

I think this article is trying to give Microsoft more credit for innovation than they deserve. While the idea seems neat, much of the story was describing things that already exist. Now, my next concern, is how well this new interface will work with non-microsoft MUAs. Judging by Microsoft's track history with such things, they will implement some slightly different, but very close, method of tracking threads, just so people who don't use their software will get a headache while trying to read emails generated by their software.

I'm all for this, if Microsoft is all for not breaking widely used standards, and keeping interoperability with 'alternate' clients, who have no problem with each other without Microsoft's MUA munging everything up for them.

Jeremy Kitchen
December 23, 2003 23:06
This is the best feature "invented" by Microsoft - ever! Only problem is that we have enjoyed this for 12+ years in the best cooperative communications products: FirstClass.
For more info: www.firstclass.com - just like mail, BUT FIRSTCLASS!

Salman
January 02, 2004 20:57
I am the person doing the work being discussed. I think that there are two things of note in the (maybe not too well written) article. The first is that you can get rid of the headers-and-message-viewer arrangement of most (all?) email programs. This is probably a good thing because it can turn a lot of clicking on headers into a continuous view. It's not exactly rocket science or novel - see the thread visualizations in www.dotnet247.com (e.g. http://www.dotnet247.com/247reference/msgs/34/170488.aspx) or www.lugnet.com (e.g. http://news.lugnet.com/cad/dat/parts/?n=4988&t=i&v=a).

The second is that the visualization shows both the sequence of messages and the reply tree at the same time. No doubt about it, you've been able switch between both of these views in email clients for years. The sequence is good because you can see what new in a thread that you're coming back to; it's also good because people aren't replying to _only_ the parent messsage, but things that they've read in the other branches. The reply tree is useful for obvious reasons. With this visualization you can do both AT THE SAME TIME, which is a good thing.

The combination of these two things is, I believe, what makes this part of Grand Central novel and interesting. In current email clients and IBM's ReMail, you have to assemble an understanding of what's going on in a thread by looking a message at a time, navigating by clicking on headers, scrolling, etc. In this view it's all laid out at once, navigable with a scrollbar, shifting the burden from the cognitive to the visual system. This, I think, is a very good thing.

Instead of basing your opinions on a short article and a screen shot, I suggest reading a little deeper: http://research.microsoft.com/scripts/pubs/view.asp?TR_ID=MSR-TR-2002-102