Silverlight 1.0 is out and it supports Linux 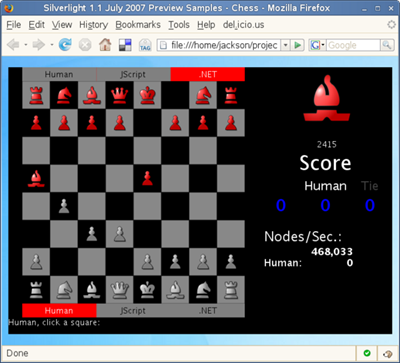 Wow, I didn't see this coming. (That's a lie, I totally saw it coming and have been saying it could, would and should happen for months) Silverlight 1.0 is officially released as of 9pm PST and surprise! It will formally support Linux (screenshots) as Moonlight via a partnership with Novell in the coming months. You can see an interview with Brian Goldfarb, the Group PM,  about this at Beet.tv. Wired also has the scoop.

"Microsoft Corp. today released to the Web (RTW) Silverlight™ 1.0, a cross-browser, cross-platform plug-in for delivering richer user experiences on the Web. In addition, Microsoft will work with Novell Inc. to deliver Silverlight support for Linux, called Moonlight, and based on the project started on mono-project.com."

If you want a great example of Silverlight content and why it's a compelling complement to Flash (and it's less hassle than Windows Media Player, that's for sure) go check out the Halo 3 Combat Trailer in HD - It's in HD 720p. As I understand it, if you haven't gotten auto-updated to 1.0 over the last two weeks (and unless you're already running 1.1 Alpha) you'll get 1.0 release bits automatically after you visit some of the bigger sites after 8am PST tomorrow.

Here's some great Silverlight examples and links from ScottGu's blog:

That may sound like picking nits, but anyone remember how long Flash player 8 was coming for Linux?

John Eckman
September 06, 2007 10:44
When I right-click on a silverlight app and click "silverlight configuration" it says I have version 1.1.blah.
What's the difference between the 1.0 release and what i have?

Vijay Santhanam
September 06, 2007 22:07
1.1 is the version with support for .NET Languages in the browser. Check the Silverlight Category in this blog.

Peter
September 11, 2007 4:11
We recently put in a check to validate that SSE instruction are available at install time. SSE wasn't added to the Duron line until Model 7 "Morgan" if you are running a Model 3 "Spitfire" the installation failed due to a lack of SSE instructions.

Daniel Harvey
September 13, 2007 15:08
It might support linux, but I was suprised to find it doesnt support windows 2000. Ah well silverlight will only by students to write games anyway......