Silverlight Video of John Lam on IronRuby at PADNUG 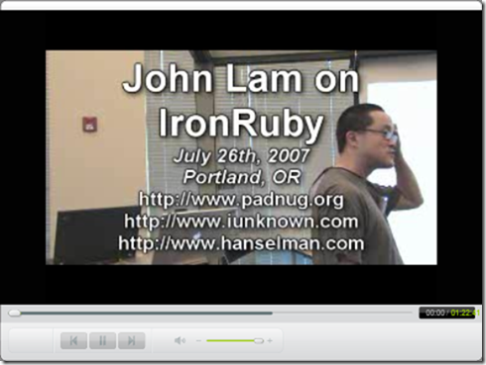 Here's the Video of John Lam talking about IronRuby at PADNUG last week. I recorded it on a Sony Wide-screen (I think HD) camera with a 60 gig hard drive. Now that I've been doing the Podcast thing I'm a freak about decent audio, so John is wearing a Bluetooth Microphone around his neck transmitting directly to the video camera.

I edited the 17 gig video in Sony Vegas Movie Studio Platinum - which I love DEEPLY. Then I ran the audio through a hiss filter and punched it up a smidge. Then I rendered as a WMV9 and used Expression Media Encoder to produce a Silverlight Project that is now sitting on my web server. The final file was about 300 megs and is about 80 minutes long.

GOOF UPDATE: Looks like there's 2 min of blackness at 58:44 that ends at 1:00:03. To be clear, nothing is missing. It appears I didn't drag two "Segments" close enough together in Sony Vegas. My bad, sorry. You'll want to skip over that part, otherwise I'll have to re-render the Whole Thing and finagle it back up to the Microsoft.com servers that I don't have access to. Live and learn.

GOOF UPDATE #2: My man on this inside, at least until September, Tim Heuer has saved the day and uploaded a re-rendered version of this video with the gaps removed. Thanks Tim!

I tried a little different technique with this video. I moved the camera the way I moved my eyes. Rather than just putting it on a tripod and attempting to interlace in Camtasia footage, I attempted to fill more documentary style with big zooms into the projected screen. I actually think it works pretty well. There's so many great presentations that happen in small groups like this (classrooms, lectures, whatever) and they often sound and look like CRAP. My goal is to experiment with audio and video styles that are the most effective - and that folks will actually SIT through. When this video is resized full screen it's pretty watch-able. I'm interested in your opinion and ideas so I can try more in this style and possibly get my new boss get loan me a camera. Hint hint, nudge nudge.

But enough about video editing, do check out the video. John talks about a number of interesting things from his OSCON presentation including side by side speed comparisons with IronRuby against Ruby proper as the new Ruby runtime that is many times faster than the old. He also shows where IronRuby isn't so fast and why there are places where it won't even be fast. It's all done in a very accessible way. It was one of the first talks in a long time that I didn't get even a little sleepy.

If you have trouble viewing the Silverlight Version of the Video, you can get the WMV directly from download.microsoft.com (which is cool considering I don't work there yet, eh?)

Video doesn't work? Remember that Silverlight is NOT released, so things aren't necessarily 100%. If you are having trouble viewing this video, do me a favor. Go to a command-line and run MSINFO32.EXE.

You'll find it in one of two places - either in c:\windows\system32 or c:\Program Files\Common Files\Microsoft Shared\MSInfo

Export the results to a text file via the File | Export option (the command line switches don't always work.) It WILL take a long time. Relax. Then, zip it up and send it to me. My email is my first name at my last name .com if you know what I mean. I'll forward it along.

Comment on this post [20]
Share on Twitter or Facebook or use the Permalink
August 01, 2007 11:35
Thanks for the download link. I'm in China, and a "single connection" across the ocean seems limited to about 12.5kb. I'm using a download manager to get 13 simultaneous slices of the file. Then I can usually max it out around 160kb. Today best I can get is around 55kb :( but that's still way better. I've a confession: with all the talk about "Silverlight", I''ve never yet seen a _definition_ of what it is, and I still don't know. Am hoping the video will tell/show me.

Stephan H
August 01, 2007 14:56
This must be a known Silverlight issue. When you switch to full screen the audio and video go out of sync and the audio runs slower.

Merill Fernando
August 01, 2007 19:57
The video is great!! I loved the talk and other then the focus being out at times I would say this is an excellent first.

One question, why does John seem to have such a hard time using the keyboard? :)

Jeff - I couldn't get our projector to talk to John's Mac which was running a Vista VM anyway, so we ended up bridging the networking for the VM and then remoting with RDP to the VM inside the Mac from my ThinkPad and it's that keyboard that John is having trouble with.

Scott Hanselman
August 02, 2007 3:39
This is a great video, the quality is really good, and silverlight shines. Good work, and hope more come. I also wanted to point out Dan Wahlins blog is a good example of how to embed video tutorials in a blog, i think if you used silverlight and also posted good tutorials with the same quality as this post, it would be a good start.

Lucas Krause
August 02, 2007 3:57
Just from the screenshot in your blog, I would suggest setting up with the windows behind the camera. This would provide natural light on John's face and prevent glare around him as the camera compensates for the backlighting.
Bob

Bob
August 02, 2007 4:40
Bob - Yes, I totally agree. This was a huge problem and was part of the room setup. I KNEW someone would notice. Thanks for the suggestion, and I'll keep my eye on things like this. I had to artificially fill to get it looking as good as it did.

Scott Hanselman
August 02, 2007 4:43
Lucas - Do you prefer them EMBEDDED in the blog or outside? I like them outside as they are separately addressable, but I may be in the minority.

Scott Hanselman
August 02, 2007 6:17
Why is this done in Silverlight and not in Flash? VP6 has the same video quality and most people already have a Flash player installed. Why do we need another player?

Why did I do this player in Silverlight? Just playing around. In the future I'd like to include the sample code that is being discussed, running directly in Silverlight, and let the developer pause the video, and mess with the code I'm working on at the same time...another one of my ideas for my new job.

Scott Hanselman
August 03, 2007 1:01
I just finished watching the video, very cool and interesting stuff. I'm really glad you recorded this and made it available to us. Thank you Scott. I might attend the local .NET User Group if we had presenters like John Lam. It appears the local DNUG is on a break until September, I will have to keep an eye on their presenter list and make a point of attending if they attract anyone good.

What struck me was it seemed that there were at least a couple of Ruby fanboys in the audience trying to "catch" John as misrepresenting the performance of IronRuby.

Stuff like (paraphrased) "Oh, you are using Ruby built in VC6" (implying) "that is why IronRuby is faster."

I don't know how John stands it without screaming. At least he shut down the guy who claimed the while loop ends up as only two CPU instructions.

You said, "I'm going to try to keep this machine free of crapware, so I'm starting to be a lot more judicious about what I go installing (unlike last year.) Here's what I needed to get going this evening..." Did you start that before or after you installed your l"get going" list?

You should have done a VM!

Scott Hanselman
August 07, 2007 4:28
By CLI I meant cmd.exe replacement. It looked like it had tabs and he was able to change the font color and size.