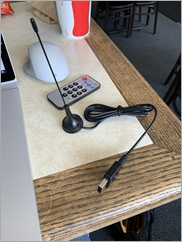 One of the magical technologies that makes an Open Source Artificial Pancreas possible is "Software-defined Radio" or SDR. I have found that SDR is one of those technologies that you've either heard of and agree it's amazing or you've literally never heard of it. Well, buckle up, friends

There's an amazing write up by Pete Schwamb, one of the core members of the community who works on Loop full time now, on how Software Defined Radios have allowed the community to "sniff" the communication protocols of insulin pumps in the RF spectrum and reverse engineer the communications for the Medtronic and now Omnipod Eros Insulin Pumps. It's a fascinating read that really illustrates how you just need the right people and a good cause and you can do anything.

In his post, Pete explains how he configured the SDR attached to his computer to listen into the 433MHz range and capture the RF (radio frequencies) coming to and from an insulin pump. He shows how the shifts between a slightly higher and slightly lower frequency is used to express 1s and 0s, just like a high voltage is a 1 and a low or no voltage is a 0. Then he gets a whole "packet," plucks it out of the thin air, and then manipulates it from Python. Insert Major Motion Picture Programmer Montage and a open source pancreas pops out the other side.

Lemme tell you, Dear Reader, Hello World is nice, but pulling binary data out of electromagnetic radiation with wavelengths in the electromagnetic spectrum longer than infrared light is THE HOTNESS.

From a STEM perspective, SDR is more fun than Console Apps when educating kids about the world and it's a great way to make the abstract REAL while teaching programming and science.

You can get a SDR kit for as little as US$20 as a USB device. They are so simple and small it's hard to believe they work at all.

Just plug it in and download Airspy (Formerly SDRSharp, there are many choices in the SDR space). and run the install-rtlsdr.bat to setup a few drivers.

You'll want to run zadig.exe and change the default driver for listening to radio (FM, TV) over to something more low-level. Run it, select "List All Interfaces," and select "Bulk Interface 0"

After you hit Replace Driver with WinUSB, you can close this and run SDRSharp.exe.

I've set my SDRSharp to WFM (FM Radio) and turned the Gain up and OMG it's the radio.

In this pic I'm listening to 91.5 FM in Portland, Oregon which is National Public Radio. The news is the center red line moving down, while the far right is 92.3, a rock station, and 90.7 on the far left is more jazz. You can almost see it!

AdaFruit has as great SDR tutorial and I'll use it to find the local station for National Weather Radio. This is the weather alert that is available anywhere here in America. Mine was Narrow Band (WFM) at 162.550 FM! It was harder to hear but it was there when I turned up the gain. 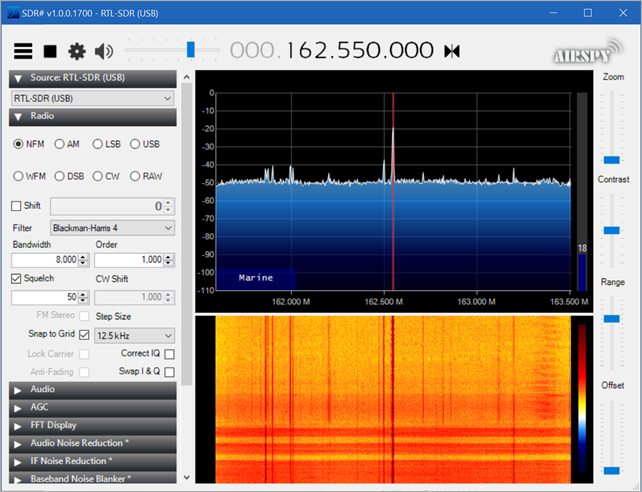 But wait, it's more than radio, it's the whole spectrum!

Here I am sending a "Get Pump Model" command to my insulin pump in the 900Mhz range! The meaty part is in the red. 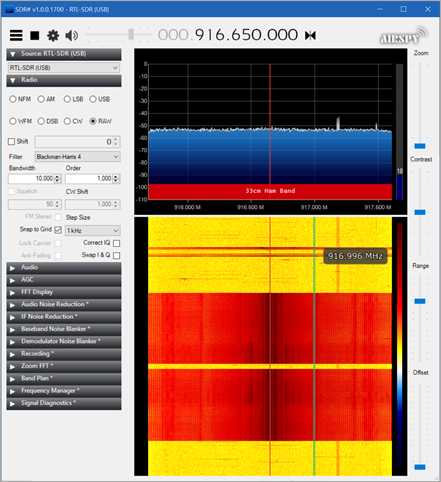 Here's the heartbeat and requests that are sent to my Insulin Pump from my Loop app through a RileyLink (BT to RF Bridge). I'm seeing the Looping communications of my Open Source Artificial Pancreas here, live. 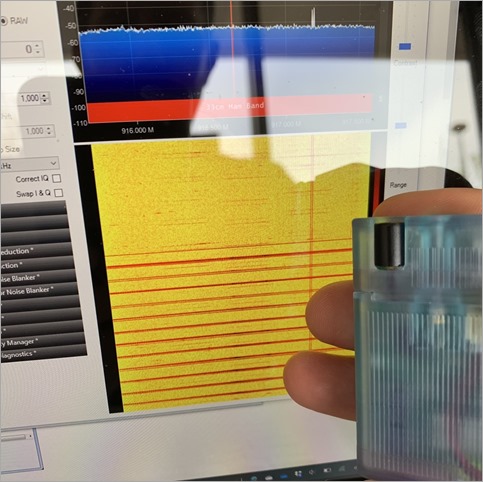 Next post or two I'll try to get the raw bits off of the RF signal of something interesting. If you haven't messed with SDR you should really give it a try! As I said before you can get a SDR kit for as little as US$20 as a USB device.

Comment on this post [7]
Share on Twitter or Facebook or use the Permalink
April 26, 2019 10:12
Good article, Scott. There's a FB group around the these RTL SDRs, in addition to a nice website, and a good cheap book. https://www.rtl-sdr.com/. These devices have a lower cut-off near the CB band (say 27MHz), so listening to radio below that can be problematic. One can get up-converters, or a version 3 device in order to receive medium-wave and shortwave transmissions.

Robert Armour
April 26, 2019 18:20
Does this means someone can stand outside my house and be able to pick up my data as well?

John Kings
April 26, 2019 20:51
After sniffing the protocol of a 433Mhz device with an SDR USB dongle and decoding it's byte stream (audacity can be very helpful), next project: get a little 433Mhz transmitter / receiver pair (for pennies) and build yourself a little circuit based around an ESP8266 WiFi chip. Following that write some firmware code that runs on the ESP8266 that reads and writes to the 433Mhz transmitter / receiver pair via it's digital I/O and voila, you've created a tiny intelligent WiFi <-> 433Mhz bridge widget. You can even run a tiny web server directly on the ESP8266 chip enabling access to this widget from anywhere.

There are lots of things that talk 433Mhz i.e. door bells, combi-boilers, some power sockets..this really is great stuff to play with.

Does this means someone can stand outside my house and be able to pick up my data ?

سئو سایت
April 28, 2019 15:33
There is an excellent introductory MOOC about SDR here (it's a spanish site but the MOOC is in english).

The Lab shows you to demodulate and decode the car key fob RF signal.

Would you let us know which SDR device you prefer? I saw a lot of different devices and start to figure out the differences.