The toughest thing for me when travelling long distances is crossing more than two or more time zones. I'm a Type 1 Diabetic and I wear both an insulin pump and a CGM (Continuous Glucose Meter) 24 hours a day.

The body has a number of times in the day when blood sugar rises and falls naturally. For example, glucose is release into your system before dawn to encourage your body to wake up. For normal folks, this is no big deal, as you've got the insulin to keep things in check. For a diabetic, this means that my blood sugar will rise starting around 5am, and run relatively unchecked until at least 9am. I need to program my pump to deliver a compensating dose of insulin.

Stated differently, my blood sugar has a natural daily, cyclic curve. I need to match that curve (ignoring meals at this point) with insulin, basically using "curve math" to subtract one from the other and end up with smooth blood sugars all day. The first curve is the body's natural intent, or natural direction. The other is the compensating insulin needed. (This is all simplified, but it'll do for this post): 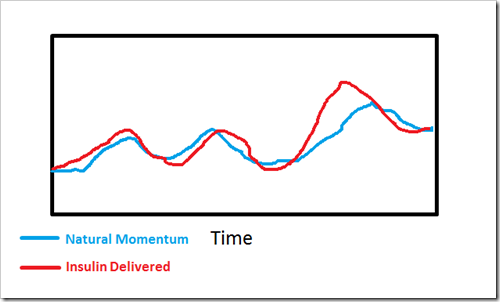 However, if I change time zones, like in this case where I moved 10 time zones East, the body doesn't get the message for a week or two. You, Dear Reader, as a non-diabetic usually don't notice this, from a blood sugar perspective. You might have a light night craving as your system knows it's dinner time when it's really 3am, but for the most part, you've got it made.

For Type 1 Diabetics (who don't produce any of their own insulin) it's a hassle, as we'll have (seemingly) random spikes in blood sugar in the first week or more of a trip, as the body releases glucose into the system attempting to wake me up.

For example, at 4pm here in South Africa, I'll start seeing my blood sugar rise as it'll be 6am on the West Coast of the US. I'll have the Pre-Dawn effect in the middle of the day.

If I'm not careful and program my pump (or take shots) correctly, I can end up like this with everything shifted by many hours: 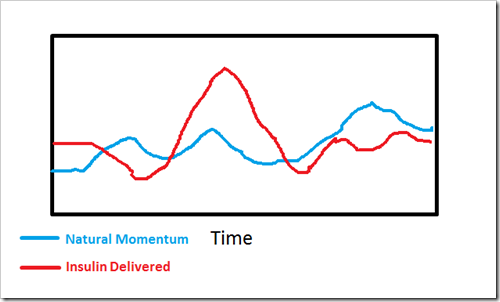 This can make for a roller coaster. It gets worse because the graph shifts an hour or so every day as I get oriented to local time. I can almost feel my "body" floating, moving slowly east over the Atlantic for the first week as I expose myself to as much light as possible in order to reset my circadian rhythms.

If you're a Type 1, possibly on a pump, I'd suggest that changing your pump to local destination time as soon as you get on the plane can help. I'd also try to eat as if you're on local time. For us, it took a little under 2 days to get here, and that time spent in the plane can be orientation time.

One other thing to watch for is daily insulin usage. I use about 30-40U (Units) of insulin, total, per day. Some use more, some use less. This a typical number for a reasonably fit guy my size. If I gain weight or lose muscle mass I'll use more insulin to accomplish the same goal of stable blood sugar.

Every time I go overseas my daily need for insulin goes down. So far, while I've been here, I've used daily amounts like 19U, 21U. That's a 33-50% improvement!  And, each time I come here I try to reproduce my results back home. So far I figure it's a (obvious) combination of:

For the life of me, I have never been able to get numbers in the US like I get in Africa. A friend of my has a theory that it has something to do with allergies. The area in the Northwest of the US that I'm from is legendary for really bad allergies. Some people check the pollen index like others check the weather. HIs theory is that the allergens are so great that they divert the attention of immune system and/or cause systemic stress, causing the body to use insulin less effectively.

I'm not sure what it is, but it'd be interesting to do some more organized experiments. I suspect it's 90% less stress, or at least, different stress than work stress. I'm hoping when I retire I'll have blood sugar like I have out here.

Comment on this post [8]
Share on Twitter or Facebook or use the Permalink
December 11, 2008 18:18
I'm a Type 1 Diabetic like Scott with much of the same equipment and I've noticed the same thing. For the last 2 months or so I've been traveling every other week out to Seattle from Chicago. Each time I notice the same drops and rises and end up shifting the clock on my pump slowly over about 3 days. It seems to work, although the change is more noticable when I travel to places like Europe.

As for the reduced usage, it tends to vary with trips but I've noticed that large weather shifts can make my usage drop from time to time.

A friend of my has a theory that it has something to do with allergies. The area in the Northwest of the US that I'm from is legendary for really bad allergies. Some people check the pollen index like others check the weather. HIs theory is that the allergens are so great that they divert the attention of immune system and/or cause systemic stress, causing the body to use insulin less effectively.

A very interesting theory. It appears to fit with the inflammation model, which we write about extensively as it relates to elevated blood sugar and gum disease.

Dr. Charles Martin
December 11, 2008 19:48
Wow, I never actually realized that traveling would have such a drastic effect on blood sugar. It might explain the way I felt "light headed" often in PA and Seattle.

Craig Nicholson
December 11, 2008 21:08
I've seen my insulin requirement drop on vacation, and I usually attribute it to the increased exercise. (Walking around all day takes significantly more energy than programming.)

I'd also look at the dietary changes, especially in terms of proteins and fats, which tend to be ignored by us carb-counters.

https://www.google.com/accounts/o8/id?id=AItOawlqPxvvXdHwafO6DoIv2LUPK39AH7M_Prs
December 12, 2008 1:08
Great post Scott. You have again taken a complicated subject and made it easy to understand (much like your magic with the famous airplane analogy).

I would also love to hear about your experiences adjusting to a more intensive exercise routine (I understand you recently started working out more?).

Scott K. Johnson
December 12, 2008 3:48
Interesting reading about this for people on pumps, and how this compares to me taking shots. I'm on two different types of insulin - Novorapid (short-acting, taken at meal times and to compensate for any snacks) and Lantus (long-acting / 24-hourly, taken usually around 11pm).

So it was interesting when I travelled to Europe this June for the first time. Being a New Zealander, it was quite convenient that the UK was 11 hours behind NZ at that time of year (10 hours behind for mainland Europe), so I could easily slip the time 'backwards' and just take the Lantus at (or just after) lunchtime - still 11pm in New Zealand. Of course, it would be trickier if I went to the USA - where I'd have to wake up in the middle of the night. In that case I'd probably try to slip it to 11pm local time, rather than disturb my sleep.

The only tricky thing is actually on the plane, trying to synchronise Novorapid with meals without getting a hypo 2-4 hours later (especially on eastward flights).

d_mcg
December 20, 2008 8:44
I wonder if the heat has anything to do with how efficiently you metabolize food.
Most people eat less in hotter climates because the food is digested more easily when warm.

Do you notice any patterns of lower insulin needs during summer months here?

Rich Moss
January 09, 2009 1:55
I'd never heard the inflammation theory before. However, I suspect it also has to do with the fact that the food in SA is (or was as of 6 years ago when I left) less processed and thus has fewer hidden carbs in the form of HFCS. My problem is, of course, the 'visible' carbs - France in particular kills me with the breads etc. :)