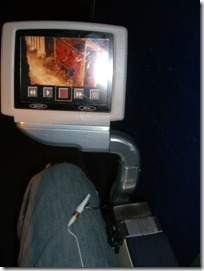 We are heading back home after our holiday in South Africa. A couple things didn't go as planned, and I was only able to get two podcasts done as two other interview subjects had scheduling issues. I think I'll interview my Wife and get her take on it.

Anyway, I was sitting here on the plane using my favorite Etymotics Research ER-6i headphones (LOVE these. Seriously, been all over the world with them) to watch Wall-E on the tiny TV they've got here on Air France. I was lamenting the fact the I was only able to listen to one channel of sound. I was only hearing sound of the left ear, since these silly planes often have that dual 1/8" headphone thing. I assume it was either just stupidity on the part of the airlines, or it was to support them charging us $5 back in the day for their crappy headphones. 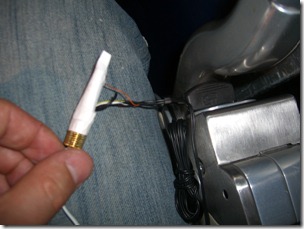 You can buy dual 1/8" to single 1/8" headphone adapters, and in fact, my older pair of Bose Headphones came with this adapter. However, it was lost a year or so ago, so bummer for me.

Air France gave use these crappy headphones with the dual headphone jack at the end. I used my teeth to cut it and strip the wires about 6" back from the end. Then I asked the flight attendant for some kind of tape or stickers. He gave me some white Avery labels they use for some paperwork.

Remember that a regular headphone has three wires, two that hold sound and a neutral/ground (I think...need to look this up). Basically, there's two colored wires and a white one. The wires inside the dual headphones had two white and two colored.

The male end of my headphones has three bands. Using trial and error via my ears, I wrapped the stripped wires around the bands until I heard stereo sound. Then I covered the whole thing in the stickers,

Fortunately the flight attendant was cool and didn't mind be rewiring the plane, but your mileage may vary. I could envision a scenario where this activity would freak out a "lesser" flight attendant.

Or, just buy an adapter. You tend to look for things to do when you've got 26 hours of flying ahead of you.

VANDAL!!! you scare the crap out of me. my inner geek is sobbing like a little girl. i'd jump off the plane and learn to fly if i knew you were onboard. dude!!! ever heard of a good book? Steve McConnell's Code Complete? One of Donald Knuth's books? War and Peace?
imagine a flight to some devcon or PDC and some one yells, "HEY SCOTT HANSELMAN IS ONBOARD!!!" wouldn't that cause mass hysteria and seeking of the exits? or would there be debate on whether the plane had USB and dotnet extensibility?

Man you are a "shivers down my back", "doesn't know enough to leave weeeeeeeeell enough alone" geek

Claude
December 28, 2008 11:14
Not much help to you now, but I've always had success in just pushing your headphones plug 4/5's of the way in (and the plug always stays in fine), then you get sound in both ears. It's worked on every plane I've been on in the last 6 months, and that's been a few. It may not be complete stereo, but it saves that lopsided feeling you get after a few minutes of listening to sound in one ear, and airplane drone in the other.

I really think I, like you, should invest the few bucks for an adaptor and attach it to my passport .. :-)

Dave
December 28, 2008 11:55
Guy travelling with 2 kids and a wife...certainly not the terrorist type. You are right about the wiring. FYI the 1/8" plug is called a Tip Ring Sleeve (TRS) plug because, well, thats what it is. The tip is usually left, the ring is right, and the sleeve is neutral. When in doubt connect the source to tip and ring and you'll have both sides, but only in mono. BTW, nice schematic :)

Steve Syfuhs
December 28, 2008 16:50
Good job! Your inner geek is much bigger than mine :-) I'd probably recommend anyone who looks remotely middle-eastern to avoid this kind of activity though, as it could easily cause a bad reaction from other passengers or cabin crew, seeing someone start stripping wires, etc.

-Rich
December 28, 2008 22:02
Air Canada is good enough to charge you for the head phones but provide you with an adapter for free. I have one and have tested it on a number of different airlines and it works just great.

IglooCoder
December 29, 2008 3:15
Fantastic! I love that the toolkit for the hack was teeth and Avery labels.

Nice hack, but I'd agree with what was said in other responses that this was the wrong time and place to do it.

If you've got the Bose headphones, the kiosks in airports are more than happy to give you a replacement for lost/broken adapters. I've been exceedingly impressed by their customer service.

Jeff Certain
December 30, 2008 3:43
US airlines (at least Delta for me) give the adapters for free with their headsets. When I leave the plane, I leave the headset behind and keep the adapter for later use.

Abdu
January 03, 2009 0:07
Briliance!
I loved reading this story. Having flown internationally several times myself, I understand the feeling of looking for things to do on the flight. Grats to you for the adaptation of freely available materials too. I get the feelings of fear around anything to do with rewiring while onboard a US in-bound flight though. I'm sure if you'd dipped one end of the headphone wires into a bottle of gatorade and the other into a travelers tube of toothpaste you'd be in a holding cell right now. :)

Gotta love inventive hacks to solve problems though, especially the ear testing to see which band matched which wire. My mum used to get so nervous when I'd played with my electronics kits as a kid thinking I'd electrocute myself. I'm sure there were people thinking that as you bit off the end of your headphones and started stripping the wires with your teeth. ;)