Ssshh...Secrets and Betas and NDAs, oh, my 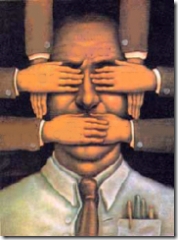 I'm testing something right now that is so cool, so simple, so obvious, so elegant, so clever, and well, just so secret, that I can't say a word to anyone.

That's what the NDA says. James Bond and his Quartermaster "Q" would be proud of me for saying nothing because I haven't said a word.

This product kindels sparks of enthusiasm in me, but I can't speak about it. I will wait though, and when I am allowed to talk about it, I'll say nice things.

It's basic, this product, but it's improving a fundamental aspect of my life the way the iPod, ReplayTV and GPS did. It's lame and it's sad to be a secret because this product deserves its praises to be sung.

I'm not sure what the point of keeping it secret is, but it's a 2.0 world and the {set of folks who are not I} make the rules.

What are you currently testing or working on that is so secret you dare not speak its name?

What have you worked on in the past that was kept secret, but by the time it finally came out, no one cared?

You'll see what he's taking about. I wonder why Scott is under NDA when it seems to have been announced almost a month ago.

TGnat
February 01, 2007 14:33
Of my secrets from the past nothing stands out more then Every single product I tested at XEROX!

With all of their secrecy and code names I never heard anyone talking about them once they actually launched.

It is freaking cool tho.

Scott, from memory, assuming you ARE talking about WHS, you CAN blog about it, and it's existance. Just not stuff which hasn't been publicly talked about my an MS person (usually cek) without clearance.

And I think, so far, he's talked about almost all the cool things in it, so it's close to fair game.....

Josh
February 02, 2007 4:48
Personally, I think NDA's are silly. I've had to sign them in the past while beta testing various games, however, a product without an NDA and some well placed fan sites can generate some great hype. NDA's simply try to put a mysterious veil over the product, making people wonder, when most of the time it’s an anticlimactic launch. Granted, I am not an inventor of the product, so I am sure they serve a worthwhile cause.

Aaron Corcoran
February 02, 2007 6:31
Josh - I dunno. I'm asking if I can do a write up. Since it's been announced to exist, the NDAs are unclear on what can be talked about. I assume, of course, that anything that's public is fair game, but I want to do a thorough review so I'm asking.